Ibadan. While this year’s media coverage of the HIV epidemic has largely focused on COVID-related disruptions of services, deeper running trends and attitudes that stigmatize people found to be HIV-positive need greater attention, said US Global AIDS Coordinator and Special Representative for Global Health Diplomacy, Ambassador Deborah Birx, in a special media briefing on the occasion of World AIDS Day.

Stigma and discrimination are not specific to HIV/AIDS, she emphasized, but they are particularly insidious in the case of people living with HIV. Stigmatization deters people from seeking life-saving testing and treatment on the one hand, and on the other can lead to the transmission of infections to others.

“We have to create an environment where individuals do not see that there are barriers to their ability to access either prevention, or treatment service. This is the work that we have to still do,” Birx told Health Policy Watch at a briefing organized by the South Africa-based Africa regional Media hub of the US Government.

The year 2020 marks nearly 40 years since the discovery of the AIDS virus in 1983, and 32 years since the first World AIDS Day in 1988. In contrast to the 1990s, when the first available anti-retroviral treatments were expensive and out of reach to most people in parts of Africa and the developing world where the AIDS pandemic was raging, some 26 million people living with HIV/AIDS today are now regularly using ARV therapies. But that still falls short of the 30 million target for 2020, that was set before the COVID pandemic began. 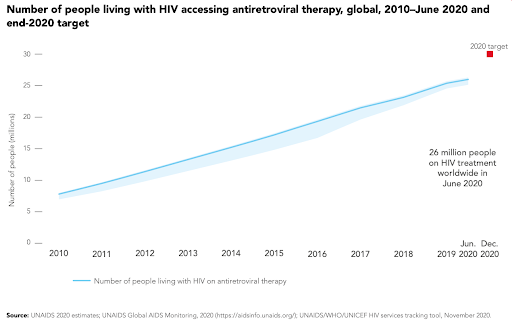 Since 2003, the US government has invested more than $85 billion in the global HIV/AIDS response through its PEPFAR initiative (President’s Emergency Plan for AIDS Relief), which extends across more than 50 countries today.

That has saved 20 million lives, preventing millions of HIV infections, and moved the HIV/AIDS pandemic from crisis toward control, Birx said. But it has not stopped the disease from being a source of stigma for people living with it.

“So it tells me that there’s still a stigma around keeping people healthy and prevention programming versus treatment programs, no matter where we work around the globe,” she observed.

She added that there remains great disparities in the means by which countries and policies address stigmas around HIV/AIDS. Great progress has been made in some countries, notably South Africa, where the epidemic raged two decades ago, but the situation has worsened elsewhere in Sub-Saharan Africa.

While access to treatment has improved in many parts of the world, things have actually gotten worse in many parts of Sub-Saharan Africa, as a result of stigmatization against key at-risk groups, said Onyekachi Onumara, Nigerian-based senior program officer at the Rural Health Foundation, in a separate interview with Health Policy Watch.

“There is much more stigma around key populations in Sub-Saharan Africa than there was five or six years ago. We have to work on this comprehensively. We also have to remember that economic fragility also brings additional risk to women and children,” Onumara told Health Policy Watch.

Gay men and sex workers are among the groups most often targeted by legal as well as social pressures that prevent them getting acces to HIV services, noted UNAIDS Executive Director Winnie Bynaymia, during the launch of last week’s 2020 Global AIDS Update.

Byanyima cited her home country, Uganda, where both groups are targeted by serious stigmatisation, backed with state legislation, including the 2014, Anti-Homosexuality Act, making homosexual acts punishable by life in prison. Such laws are common in conservative cultures of Africa as well as the Middle East and Asia. And in some countries, a backlash by conservative cultural and religious groups has seen them reinforced only recently.

“For LGBTQI laws, that’s where our criminal laws are hardest, and are not being unwound. So we have to understand this conservative backlash and see how to address it. I think such forces can only be rolled back through movement building. We cannot hope to have an open space unless we mobilize people and change attitudes,” Byanyima said last week.

“Sometimes [we] think we can solve the problem of HIV AIDS through a biomedical approach. We can’t. There is no treatment, no pre-exposure prophylaxis, ARV or whatever, that will reach the hands of a gay man in my country Uganda where the criminal law is being enforced in a harsh way,” she said.

She said the world needs to push back against conservatism that is making it harder to move forward on women’s rights or the rights of all sexual identities.

“I say this really sincerely,” she said. “Free media, freedom of association, freedom of speech, these are also under attack. And I think that for us, if we want to fight AIDS, we do need to protect those core tenants of a liberal democracy.”

As one means of overcoming stigma, Birx said more money needs to be invested in supporting and protecting peer-led HIV/AIDS services.

“We need to overcome the structural barriers that really plague key population programs, particularly in Sub-Saharan Africa. In many places around the globe, peer-led service delivery is much more successful outside of the public sector for many reasons. 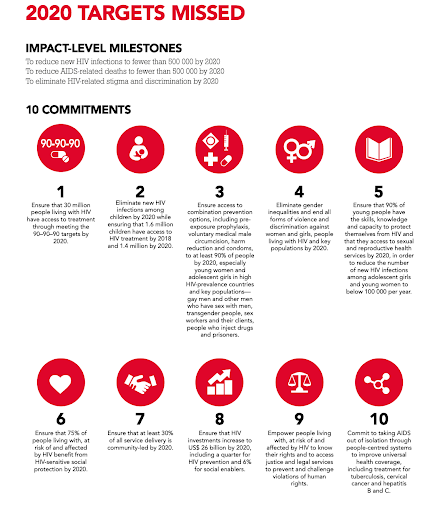 While the global AIDS response was off track before the COVID-19 pandemic, the onset of lockdowns and travel restrictions created additional setbacks. While services have since “rebounded” in many countries, according to the World Health Organization, UNAIDS has warned that the the world may still see an estimated 123,000-293,000 more HIV infections and 69,000-148,000 more AIDS-related deaths between 2020 and 2022.

“The collective failure to invest sufficiently in comprehensive, rights-based, people-centred HIV responses has come at a terrible price,” said Byanyima. “Implementing just the most politically palatable programmes will not turn the tide against COVID-19 or end AIDS. To get the global response back on track will require putting people first and tackling the inequalities on which epidemics thrive.”