CAPE TOWN – Shortly before New Year’s eve, the South African government lifted the country’s curfew and allowed indoor gatherings of up to 1000 people – despite the prevalence of the highly infectious Omicron variant.

The Cabinet-level decision was taken after considering “the trajectory of the pandemic, the levels of vaccination in the country and the available capacity within the health sector”, according to a government statement.

On 23 December, the health department had declared that those who were asymptomatic did not have to quarantine and it dumped contact tracing. However, after a public outcry, the department backtracked a week later, saying that it had “decided to put the implementation of the revised policy changes on hold, while taking all additional comments and inputs received into consideration”.

Nonetheless, the health department explained that its initial decision was based on the fact that  “most people have vaccinated with at least one vaccine dose and developed some level of immunity”, “many people do not show any symptoms, and only a small percentage of them are diagnosed” – and “a number of people including children who are in contact with COVID-19 positive people, lose their income and valuable school time while staying at home without symptoms”.

As South Africa opens up, Europe goes for lockdowns

In contrast, European nations including France, Austria, the Netherlands and Germany introduced tough restrictions on gatherings and all but cancelled Christmas as they faced Omicron.

A couple of weeks after Omicron was identified, scientists reported that its effects were substantially milder than previous COVID-19 outbreaks.

A study published in the International Journal of Infectious Diseases on 28 December based on statistics from hospitals in Tshwane, the city at the centre of the initial Omicron outbreak, reported Omicron deaths were 4.5% of hospital cases versus 21.3% from the previous three COVID-19 outbreaks, ICU admissions were 1% vs 4.3% and Omicron patients’ length of stay in hospital was 4.0 days – less than half the 8.8 days of the previous outbreaks.

Meanwhile, the country’s most populous state, Gauteng, passed the peak of COVID-19 Omicron infections about a week ago, recording 15% of the deaths of Delta, and half the number of hospitalisations.

While the national picture in South Africa🇿🇦 is still evolving, in GAUTENG, where #Omicron wave is ahead of rest of the country, ALL #Covid_19 indicators have now peaked 👏#COVID19 cases peaked at 90%, hospitalisations at 50% and deaths at 15% of previous delta peak 📉 pic.twitter.com/kCU0jrTNP5

While case numbers are still relatively high in states such as the Western Cape, the disease is substantially milder throughout the country, and even though the variant is more infectious than previous ones, it has not overwhelmed the country’s hospitals. 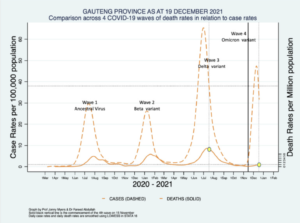 One of the key reasons for how quickly Omicron has passed in the country is the substantial community exposure to COVID-19, which has built immunity.

A sero-survey of over 7000 people in Gauteng between October and December 2021 found that almost three-quarters (72%) had experienced previous COVID-19 infection. Sero-positivity was 79% in unvaccinated people and 93% in vaccinated people over the age of 50, which is the group most at risk.

Over half of all adults are also vaccinated against COVID-19, mostly with Pfizer followed by the Johnson & Johnson vaccine. Furthermore, the average South African is much younger than the average European.

However, the country is also desperately trying to salvage its economy. The GDP contracted by 1,5% in the third quarter of last year, and South Africa is in the midst of the worst unemployment since it started compiling statistics. Over two million people have lost their jobs during the pandemic and the discovery of Omicron shortly before the Christmas tourism season has cost the hospitality industry millions of dollars.

Shops were noticeably quieter this Christmas as job losses and a weakened currency translated into higher prices for fuel and other imported goods.

Professor Shabir Madhi, head of  Vaccinology at the University of Witwatersrand, has called for new generation vaccines that target a number of different sites of the virus – much like highly active HIV antiretroviral therapy, which targets three different sites of cell entry to combat the fast mutations of HIV.

certainly require improved vaccines especially for milder disease, and particularly more resilient against RBD mutations. Rather than anti-S only vaccine, incorporating epitopes from N and M could broaden breadth of T response and reduce/limit virus replication

“The South African government appears to have come to appreciate that the past practices have had limited success in preventing infections, and fully appreciates the detrimental effects that restrictions have had on the economy and society,” wrote Madhi and others in an article in The Conversation on 7 January.

“In addition, it has run out of road to continue with what has unfortunately not yielded much benefit. Despite all the severe lockdowns South Africa still ranks high with a Covid death rate of 481 per 100,000.”

Madhi and colleagues argue that “the major risk is the unpredictability of new variants that evade all aspects of past infection and vaccine-induced immunity”, but also declare that “with Omicron the epidemic phase of COVID-19 is coming to an end”.