While delegates remained bogged down today in negotiations to find consensus on a resolution to increase transparency of pharma prices, five United Nations agencies and the Global Fund to Fight AIDS, Tuberculosis and Malaria forged a brand new collaboration to promote local production of medicines.

The World Health Organization, the UN Industrial Development Organization (UNIDO), the UN Conference on Trade and Development (UNCTAD), UNAIDS, UNICEF, and the Global Fund co-signed the “Interagency statement on promoting local production of medicines and other health-related technologies.”

The six signatories pledged to work “in a collaborative, strategic and holistic manner in partnership with governments and other relevant stakeholders to strengthen local production… based on our respective organizations’ expertise and mandate.” 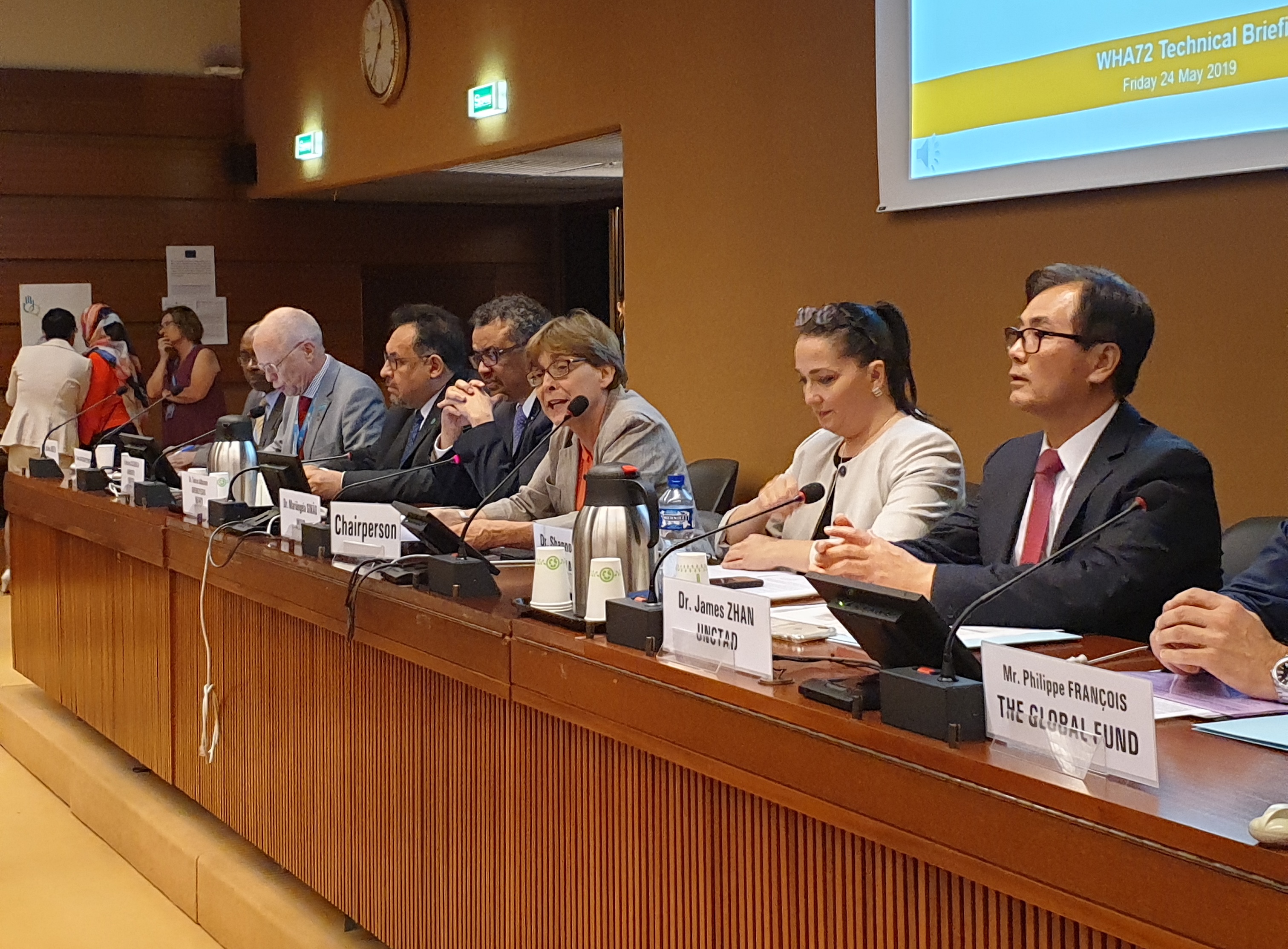 “Local production has obvious benefits for health by creating a reliable and affordable supply of essential medicines and other health products,” said WHO Director General Tedros Adhanom Ghebreyesus (Dr Tedros) at the launch of today’s event. “But it also creates jobs and contributes to economic growth, but realising the promise of local production is not straightforward.”

“Three ingredients are essential,” he added. “First, an overarching government strategy and plan that considers all the prerequisites for sustainable local production. Second, strong regulatory systems essential to ensure the quality and efficacy of medical products. And third, an enabling business environment to build the knowledge, skills and capacity of the medical product industry. None of this can be done by ministries of health alone, it takes a holistic approach that includes political commitment at the highest level, policy coherence, access to finance and technology for sustainable, quality production, need-based innovation, and investment incentives.”

Inadequate access to medicines in many developing countries leads to increased morbidity and mortality, and would be alleviated by the proximity of manufacturing to the point of use, said Bernardo Calzadilla-Sarmiento, Director of UNIDO. It would also shorten supply chains, and reduce stock-outs and shortages.

However, local producers in developing countries also need support in order to ensure that their facilities will meet drug quality standards, said James Zhan, Senior Director at UNCTAD. He stressed the importance of technology transfer and building know-how, to make investments successful.

“Local producers should be assisted in their efforts to meet WHO standards of good manufacturing practice and medicine quality, safety and efficacy. This is a prerequisite for participating in public tenders that ensure a reliable demand,” he said. “Governments should consult with domestic industry to realistically assess which medicines have to be imported, where there are shortcomings in foreign supplies, and what are the capacities of the domestic firms.”

However, overall, creating local production sources can contribute to public health security, especially in cases of pandemics, he added, as well as supporting industrial diversification, technology dissemination and job creation.

The incredible success story of HIV/AIDS treatment should be remembered, said Shannon Hader, Deputy Executive Director of UNAIDS, as local production “had a huge role in it.” Competition and volume drove prices down, she said, remarking however that maintaining generic competition is increasingly difficult with the enforcement of the World Trade Organization (WTO) Agreement on Trade-Related Aspects of Intellectual Property Rights (TRIPS) rules.

Economy, trade and industry have to be reconciled with human rights and public health, she said.

“This is happening,” he said, citing nine million units of anti-malarial medicines that are now annually sourced from Uganda, along with 13 million mosquito nets from Tanzania. He stressed the importance of reaching a critical mass in production so it is economically viable, and putting policies in place to export production in excess of local needs.

Ambassador Shameem Ahsan of Bangladesh said the country has been pushing local production for the last three decades and now meets 98 percent of local demands for medicines with local production. Bangladesh also exports to over 100 countries and is set to make US$5 billion in earnings from its pharmaceutical products by 2021. Over 300 small, medium, and large companies are producing pharmaceutical products, he said, allowing low prices on the domestic market.

Bangladesh, he said, had developed a skilled manpower force, an investor-friendly environment, and stringent adherence to WHO and international standards of quality for medicines production. The country is now seeking to make strides in health technologies, he said.

He said that the strengthening of South-South cooperation can foster even greater synergies between health, development and trade, and called for developed countries to respect TRIPS Articles 66.2 and 67 of the WTO agreement on technology transfer and technical cooperation to developing and least-developed nations.

Other representatives from Ethiopia and Pakistan also said that their countries were encouraging and reaping growth from the pharma sector.

Assad Hafeez, Director General of Health at the Ministry of National Services, Regulations and Coordination of Pakistan said that the growth rate in the pharma sector in Pakistan was close to 20 percent. Local production has allowed the country to gain affordable access to the new Hepatitis C treatment, he explained.

For countries that invest in local medicines production, an adequate regulatory and intellectual property framework needs to be put in place so development is conducive to public health and does not create subsequent barriers to the registration of generics, said Ellen t’Hoen of Medicines Law and Policy, and a former head of the Medicines Patent Pool (MPP).

She suggested that countries further explore the possibility offered by the intellectual property flexibilities under the WTO TRIPS Agreement that allow developing countries a temporary exemption from granting or enforcing drug patents. For the purposes of safeguarding public health, these countries can issue “compulsory” licenses to manufacture generics of the drugs locally. In other cases, so-called “voluntary” licences to local manufacturers, such as those negotiated by the MPP with multinational pharmaceutical companies, should also be explored further, she said.

Marg Ewen of Health Action International also drew the attention of the audience to a study conducted on three countries, including Tanzania and Ethiopia, comparing the price and availability of locally-produced and imported medicines. The study delivered “mixed results,” she said, calling governments to look at their own policies to make sure that reduced production costs are really passed on to their population.

Greg Perry, Assistant Director General of the International Federation of Pharmaceutical Manufacturers and Associations (IFPMA), listed what he described as the most key criteria for successful local production of medicines, including: strengthening of regulatory capacity building, active and strong criminal action against spurious medicines, sustainable pricing, and an orderly, predictable business environment and governance system.