Rwanda started vaccinating health workers against COVID-19 on Monday, but there is confusion about which vaccine it is using or where it has got it from.

The official announcement from the health ministry on Twitter simply said that “international partnerships” had made the vaccination drive possible. 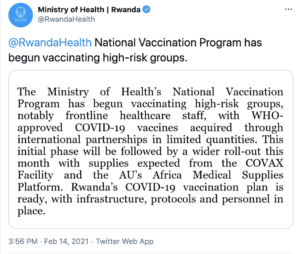 According to the Rwandan government, the past week was simply a trial run before a more extensive vaccination rollout in two weeks time with the AstraZeneca/Oxford vaccine from the COVAX facility.

Although the source of the initial vaccines has not been confirmed by their government, the World Health Organization (WHO) Africa office said that Rwanda would have acquired these through bilateral arrangements as the COVAX vaccines will only arrive later in the month.

Dr. Phionah Atuhebwe, a vaccinologist and the new vaccines introduction medical officer at WHO Africa office, told Health Policy Watch on Tuesday that COVAX had to wait for the WHO decision on an emergency use listing of AstraZeneca before it could dispatch the vaccines. This was granted on Monday.

AstraZeneca Due to Arrive Very Soon

Atuhebwe said most African countries participating in the COVAX initiative would receive their AstraZeneca doses in the next two weeks.

The WHO Africa office said national regulatory authorities are not compelled to inform WHO of the products they received, but given the unprecedented nature of COVID-19 the office was offering technical support and guidance to ensure the quality, safety and efficacy of products used.

In an interview on CNN this week, Rwandan president Paul Kagame said “We will take any vaccines that come that we are told work.”

In media reports, Rwanda said it will spend $124million to ensure vaccination coverage of at least 60% of its population.

Aside from bilateral agreements and COVAX, African countries will also get vaccines from the African Union platform, the African Vaccine Acquisition Task Team (AVATT). AVATT has secured a provisional 270 million COVID-19 vaccine doses from Pfizer, Johnson & Johnson and AstraZeneca.

COVAX also anticipates that, via an existing agreement with AstraZeneca, at least 50 million further doses of the AstraZeneca/Oxford vaccine will be available for delivery to COVAX participants in the first quarter.

Pfizer-BioNTech Vaccine Due Soon But Has Stringent Requirements

Rwanda is one of only four African countries, together with Cabo Verde, South Africa and Tunisia , to have been approved by COVAX to receive the Pfizer/ BioNTech vaccine, which needs to be stored at minus 70C.

According to sources, Pfizer has made access requirements stringent which has made it difficult for some African countries to apply for this vaccine. Aside from the ultra-cold storage, Pfizer has a list of legal requirements including indemnification, liability and compensation for countries that receive its vaccine.

WHO’s Atuhebwe said this vaccine was expected to arrive within the next week. Meanwhile, Hassan Sibomana, the director of the vaccination unit at Rwanda Biomedical Centre (RBC), said the initial challenge of lack of capacity to store vaccines at minus 70 Celsius (minus 158 Fahrenheit) has been addressed.

Five new ultra-cold freezers worth around USD$50,000 have been purchased and the ministry has a capacity to store about 300,000 vaccine doses, Sibomana told the local media, underlining that vaccine safety is their priority to avoid any side effects on people.

However, Pfizer submitted evidence to the US Food and Drug Authority this week showing that its vaccine could be stored at around minus 25 Celcius to minus 15 C, according to a company media release.

“It has been possible to procure some of the Pfizer-BioNTech vaccine for a number of African countries not very extensively, however, it will give us the experience of using this vaccine,” said Matshidiso Moeti, the Regional Director of the WHO Africa Office.

Moeti said WHO is working very hard with African countries to finalise their plans for the distribution and delivery of the vaccine and about 34 of the countries on the continent already have their plans ready. A significant roll out of the vaccines in Africa is expected by March this year.

At the WHO Africa press conference last week, Peter Piot, the director of the London School of Hygiene and Tropical Medicine, told reporters that having access to vaccines in Africa, is not only a moral issue but a matter of solidarity.

“This is going to become one of the big geopolitical issues of our time – access to vaccination. There, there are contracts through COVAX, the African Union and others. However, manufacturing is lagging behind. And scarcity is a big enemy of equity. So we need to really invest more in manufacturing, including in manufacturing that can happen in Africa.”