ISLAMABAD – Pakistan authorities are threatening to fire healthcare workers who refuse to be vaccinated with the Chinese-donated SinoPharm COVID-19 vaccine.

In a harshly worded letter, , the Directorate of Health Services in Sindh warns frontline health care workers that reluctance to get the jab will result in “strict disciplinary action” including suspension or dismissal from government services.

The letter dated 24 February and signed by Dr Nazir Ahmed Rind states that: “If any frontline health care worker refuses to vaccinate, he/ she may be terminated/ suspended from the Government Services”.

The objection to being vaccinated with the SinoPharm vaccine stem from concerns raised about its efficacy and safety, particularly as a division of Pakistan’s health ministry initially declared that the vaccine was unsafe for people older than 60, pregnant women and lactating mothers.

Although the government has since reversed its position on this, it has done little to address  health workers’ concerns.

So far, only half of the 500,000 HCWs registered to be vaccinated have received the vaccine and the country’s health authorities are not taking kindly to their unwillingness to be vaccinated.

The Sindh health ministry confirmed that the notice was issued by the secretary’s office, but the provincial health minister’s PR officer failed to respond to requests for comment.

Similarly, in another letter dated 27 February, the management of the Pakistan Institute of Medical Sciences (PIMS) in Islamabad, one of the largest hospitals in the country, has issued a stern warning to employees that “all registered PIMS staff must get vaccinated as soon as possible. Otherwise, strict disciplinary action will be taken against the defaulter, as per rules”. 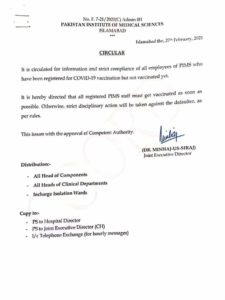 Pakistan started vaccinating its frontline health care workers (HCWs) – including doctors, nurses and paramedics – in its federal capital and all of its federating units simultaneously in early February.

Dr Rana Mohammad Safdar, Director General of the Health Ministry’s National Health Services Regulations and Coordination (NHSR&C), said that about 250,000 people have been vaccinated out of the 500,000 HCWs that had registered.

“The vaccine has side effects,” said Dr Yasmin Rashid, Health Minister of Pakistan’s most populous province, Punjab, in a press briefing after receiving the SinoPharm vaccines. She added that anyone getting the vaccination should do so at their own risk.

At the time, the minister also said that it would be “premature to say how long [the vaccine] will be effective”.

Initially, the Ministry of NHSR&C had recommended that people over the age 60, lactating mothers and pregnant women should not get this vaccine, but a month later, the Drug Regulatory Authority of Pakistan approved the vaccine for these groups.

The contradictory advice raised concerns among HCWs. Dr Tanvir-ullah, serving in the federal capital Islamabad’s Federal Government Services Polyclinic Hospital, said that he tested COVID-19 positive after getting the vaccine.

“I received the vaccine on 18 February and after that I felt body aches and later on, mild flu symptoms also developed,” he said.

On 4 March he tested positive for COVID-19.

Tanvir-ullah said that HCWs feared that the vaccine may be being tested on them.

“Generally, HCWs are reluctant of the vaccine [and] believe they are being involved in the vaccine’s trial,” said Tanvir-ullah. “Safety and efficacy are indeed a concern of HCWs not going for vaccination.”

Dr Qaiser Sajjad, secretary general of the Pakistan Medical Association (PMA) – a body working for doctors’ rights – said the vaccination of HCW was “slow” as doctors are ‘reluctant’ to get the Chinese vaccine.

Sajjad said that PMA has registered 189 doctors’ deaths in the fight against COVID-19 and the “unclear” message by the government regarding the efficacy of the vaccine was creating problems.

“Doctors [are] reaching out to the PMA platform and ask[ing] about efficacy, data availability, research standards, expiry and status of the donated SinoPharm vaccine,” said Sajjad. “Unfortunately, instead of convincing the HCWs, the government is trying to force them to vaccinate, which is unethical.”

“Government must inform HCWs on how a vaccine that was not effective for people above the age of 60 years, suddenly became effective,” said Sajjad.

Public health expert Dr Zafar Mirza, who served as health minister for Pakistan and director of the Health System of World Health Organization (WHO), said that the government should have communicated to the HCWs about the safety of the vaccine in a well thought-out way.

“There is a need to correct the perception of safety and efficacy of the SinoPharm vaccine in HCWs and the public as well,” he said.

Mirza pointed out that, although no adverse case had been recorded after administering the SinoPharm vaccination, the vaccine’s safety had not been appropriately conveyed.

“Out of 500,000 HCWs the number of registered and vaccinated is very low and should have been completed so far,” said the doctor.

Akhtar Abbas, spokesperson for the Drug Regulatory Authority of Pakistan said the authority had approved the vaccine after analyzing the submitted data. He said no adverse case about safety of the SinoPharm vaccine had been reported from anywhere in the world.

Abbas said the vaccine had also been approved for people older than 60 after the expert committee reviewed the data that no adverse effect was recorded from any other country.

According to the data released by Pakistan’s National Command and Operations Center (NCOC), a strategic forum established by the government to deal with the COVID-19 pandemic, 504,000 doses of the SinoPharm vaccine had been distributed in all federating units of the country for the frontline HCWs.

Rizwan Malik, Public Relations officer for the health minister of Khyber Pakthunkhwa, said that health authorities had observed an upward trend in vaccinations in the last two weeks of February, but this dropped off recently.

“Provincial government is encouraging HCWs to come for the vaccination,” he said.

Federal Minister Asad Umer, who heads the NCOC, said that around 50 percent of the HCWs had been vaccinated and “not a single case” regarding safety of the vaccine had been reported.

He agreed that there was a reluctance from HCWs to get vaccinated but that this was happening in other parts of the world as well. “Maybe HCWs are reluctant because it is something new for them,” he said.

Meanwhile, Dr Imran Sikandar of PIMS hospital, who received the first vaccine in the countrywide vaccination drive, said that he feels “perfect” after getting both doses of the SinoPharm vaccine.

“I received the first dose on 2 February and the second jab on 23 February and I am feeling healthy,” said Sikandar.

He said concerns about the vaccine were only misconceptions and needed to be eradicated. He added that vaccinations of HCWs should be made mandatory for the safety of the public.

No Peer Review Study Yet

Neither of China’s two leading vaccine candidates, SinoPharm and Sinovac, have been approved by an external regulatory agency and discussions are still continuing with the WHO, according to WHO officials.

Although China has been accused of donating its COVID-19 vaccines for political power, Chinese President Xi Jinping stressed at recent meetings of the World Health Assembly that it viewed its COVID vaccines as a global “public good”.

China has also joined the global vaccine access platform, COVAX, and promised it 10 million doses. China reports that it has also offered vaccine assistance to 53 developing countries, and that it has exported or is exporting vaccines to 22 nations, according to Foreign Minister Wang Yi.

A recent preprint paper, which has not undergone peer review, suggests that SinoPharm’s vaccine held up well against a South African SARS-CoV2 variant (501Y.V2). In the analysis of blood samples from a dozen vaccinated participants, the vaccine’s neutralizing power was only reduced by a factor of 1.6 when it was exposed to the variant.

Countries Have Autonomy to Authorise Health Products, says WHO

“There are and will likely continue to be manufacturers of some vaccine candidates who may be delayed in seeking or choose not to seek emergency use listing by WHO or authorisation by a stringent regulatory authority,” the WHO told Health Policy Watch.

“The use of some of these products has proceeded in a number of countries with the agreement of national authorities. It is possible that the data required for a WHO emergency use listing assessment may not have been available at the time of national decisions to use such vaccines.”

In cases where a country’s vaccines were not requalified by the WHO but approved by a country’s national regulatory authority, it was common for the global body and UNICEF to provide technical assistance, added WHO.

“WHO’s support is provided to the immunization programme of the country, not to a specific vaccine. This support includes capacity assessments, planning, advising on delivery strategies, ensuring adequate cold chain, data monitoring, communication including raising public awareness and promoting demand for vaccination, and risk communication,” stressed the WHO.