ISLAMABAD – Pakistan health authorities are struggling to fully implement a World Health Organization (WHO) treaty to help reduce tobacco-related diseases in the country – some 17 years after they ratified it.

Furthermore, the country’s health ministry recently announced the termination of the services of a number of staff members in its Tobacco Control Cell (TCC), the only government body addressing tobacco consumption, by the end of May.

When challenged, government officials claimed that its tobacco control work would not be affected, but tobacco control activists fear that they have given in to industry pressure to close down the TCC.

Pakistan signed the Framework Convention of Tobacco Control (FCTC) in 2004, and in terms of its guidelines, signatories are duty-bound to increase excise duty on cigarettes by up to 70% and impose pictorial health warnings covering up to 85% of cigarette packs.

Not Enough Taxes or Pictorial Warnings

But activists believe that the country’s Ministry of National Health Services Regulations and Coordination (NHSR&C) has failed to achieve a significant increase in federal excise duty (FED) or place sufficient pictorial health warnings on cigarette packs.

“So far, Pakistan has increased the FED to 45% and pictorial warning to 50% only,” says Sanaullah Ghuman, Secretary General of the Pakistan National Heart Association (PANAH).

Despite vowing to impose a “health levy” on tobacco and sugary drinks back in 2018 and to spend the proceeds on the health sector, this levy has never been adopted  – and some believe it is being deliberately delayed.

Ghuman believes that the future of the levy hangs in the balance as it has been in line for three years to become a law. He also believes that Pakistan should increase taxation on tobacco products, but said this issue was given very low priority in the current budget.

Despite a recommendation from the Ombudsman Court and Law Department that the Federal Board of Revenue (FBR) should “immediately” implement the health levy, the matter is on backburner in FBR, added Ghuman.

In 2014, the health ministry announced that it would introduce health pictorial warnings to cover 85% of cigarette packs but this has never been implemented and warnings currently only cover 60% of packs.

Huge Cost of Tobacco Use

Pakistan has an estimated 22 million smokers and is one of 15 countries with a high burden of tobacco-related diseases. Over 30% of men and almost  6% of women smoke and, according to the TCC website, 163,360 people died in 2017 due to tobacco use in the country.

Between 30-40% of Pakistanis die of cardiovascular diseases and tobacco-induced heart attacks are one of the major reasons for this, according to a study by Center for Global and Strategic Studies (CGSS) published in January.

In addition, 1.5 million cases of oral cancer and almost half of tobacco users contracted tuberculosis, according to the study.

Discouraging tobacco consumption in public remains a tough task for the Pakistan government as its own ministers have been found violating smoking in public places.

The current Minister for Interior smoked during a press conference in his previous portfolio as minister for railways.

Meanwhile, a senator who is also a cigarette manufacturer was exposed in the media for distributing cigarettes branded ‘Senate House’ in the parliament.

However, Prime Minister Imran Khan, who also established the first cancer hospital in the country, is in favour of taxing tobacco products.

According to a document obtained by Health Policy Watch, Dr Faisal Sultan, the Special Assistant on health to the Prime Minister (SAPM), urged the then advisor to finance, Dr Abdul Hafeez Shaikh, to impose the proposed health tax on tobacco and sugary drinks. 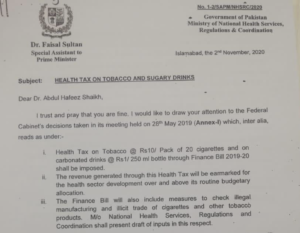 According to the letter: “Health tax on tobacco @Rs10/per pack of 20 cigarettes and on carbonated drinks @Rs1/250 ml bottle through Finance Bill 2019-20 shall be imposed”.

“The revenue generated through this health tax will be earmarked for the health sector development over and above its routine budgetary allocation. The Finance Bill will also include measures to check illegal manufacturing and illicit trade of cigarettes and other tobacco products,” the letter added.

“It’s about 1.6% loss in GDP,” Imran said, adding that, due to inflation, the tax on cigarettes was effectively at the 2016 level of 33% instead of the framework-recommended 70%.

According to a study conducted by a semi-government department Pakistan Institute of Development Economics (PIDE), the cost of treating smoking-realted cancer, cardiovascular and respiratory diseases was estimated to be Rs437.8 billion ($6 billion) in 2018–2019.

In comparison, the total revenue collected from the tobacco sector covered only around 20 percent of the total cost of smoking.

A senior official of the federal health ministry, who requested not to be named, said that one project of the TCC is going to be closed at the end of May and staff contracts terminated.

The official said that “it does not affect FCTC work”.

The official added that the health ministry had followed up on the health levy bill with the  law division and the Federal Board of Revenue was expected to submit it as an ordinary bill in the parliament after the budget, because it is not a money bill.

The official also said that, at present pictorial health warnings were at 60% of packs as the decision to increase this to 85% was being challenged in court.

The official claims that “we are working on raising FED on cigarettes in this budget”.

The Prime Minister’s Aide on Health, Dr Faisal Sultan, said that the TCC had not been dissolved, the health levy was being worked upon and the health ministry was pushing for it and that the pictorial warnings were likely be enhanced.

The WHO’s country office did not respond to a number of requests for comment although its communication officer ,Maryam Yunus, acknowledged receiving the queries.