In past decades, Europe has achieved one of the world’s highest water and sanitation coverages, but it is often forgotten that one in ten schools in the 53 countries of WHO’s European region still lack basic hand washing facilities, leaving some 5 million pupils without access to soap and clean water.

As students begin filling up schools in attempts to return to the ‘new normal’, these worrying gaps in Europe have potential to spur more Covid-19 outbreaks and to fuel existing inequalities, warned Marta Vargha from Hungary’s National Institute for Environmental Health, at a recent webinar hosted by Geneva Environment Dialogues.

Last Friday, Vargha’s warnings became even more relevant as a South Korean study of 65,000 people showed children between the ages of 10 and 19 can also spread the coronavirus, strengthening the case for improved water and sanitation coverage in all settings – including schools.

As a result of inadequate water, sanitation, hygiene and health (WASH) services, 14 people die every day from diarrhoeal diseases in the WHO European Region.

And within European countries, services are unevenly distributed. In some cases, there is a four-fold difference between urban and rural settings in access to drinking-water and sanitation services, said a WHO spokesperson to Health Policy Watch.

But the burden of water-related disease is most significant outside of Europe, as about 90% of diarrhoeal deaths occur in south Asia and sub-Saharan Africa, acccording to the Global Burden of Disease 2016 Study.

Access to Safe Water – First Line of Defense Against COVID-19 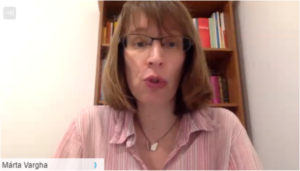 Access to safe water is the first line of defense against the new coronavirus, and is the “primary tool” to prevent infection from any disease-causing organism, emphasized Vargha at a webinar hosted by Geneva Environment Dialogues last month:

“Under the current pandemic, to be really efficient in prevention, safe [water] should be accessible not only at home, but also wherever we go, including schools, healthcare facilities, in workplaces and public settings” like public transport facilities.

A Thirst For Data

Large regional disparities are also hidden behind national averages in “almost every country”, owing to the fact that basic WASH indicators have not been embedded into national monitoring.

While the problem of water, sanitation and hygiene in schools and other public buildings remains serious, Europe is still better placed than most regions of the world to address it, as 27 countries in the region are signatories to the 2005 Protocol on Water and Health.

The Protocol helps countries set national targets on water sanitation, hygiene and health (WASH) based on their needs – and ensures “long-standing commitments” because they must report progress at national and international levels every three years.

In contrast to other legally binding agreements – like the WHO’s International Health Regulations (IHRs) or its Framework Convention on Tobacco Control (FCTC) –  the protocol’s compliance committee is a ‘very interesting’ alternative because it does not force Parties to comply, said Co-Secretary for the Protocol on Water and Health Oliver Schmoll. Instead, it achieves effective implementation through a “non-confrontational” and “facilitative” framework:

“The consultation mechanism is not a very hard instrument”, explained Nikiforova. “But it’s a very smart instrument to work with countries in order to facilitate implementation in a non-confrontational way through a consultative process, and thereby ensuring implementation.“

In total, twelve countries have already undertaken a self-assessment to address disparities in their populations, especially in rural settings, said Vargha.

In the Republic of Moldova, the self-assessment brought safe drinking water to some 67,000 villagers in rural areas through new infrastructure initiatives. Meanwhile, other countries like France, Portugal, Hungary, Ukraine and Armenia, have amended national legislation to fill gaps in WASH services, each in different ways.

Hungary has improved minimum standards for water safety, while Portugal and France have cheapened the cost of drinking water. And Armenia has incorporated a definition of marginalized groups in their Water Code, ensuring that legislation caters to the most vulnerable.

Expanding The Protocol To Other Regions

At the moment, protocol membership is exclusive to the 53 Member States in the pan-European region. However, it is Africa, Asia and slabs of Central and Latin America where WASH services are most needed.

In light of unmet needs around the world, it “would make sense” for the Protocol to “open up” to other regions, said Nikiforova, although there is currently no road map for doing so.

Before the Protocol can expand, 26 additional European member states would need to ratify the Protocol first, and “considerable political will” is going to be necessary, added Nikiforova, as she referred to the fact that only 27 out of the 53 Member States in the Region have ratified the Protocol.