Striking through the politicised warnings and potentially hollow gestures, a new study has found that COVID-19 vaccines could remain out of reach until at least 2022 for nearly one- fifth of the global population – despite months of pleas and appeals to ensure their widespread global distribution.

The study, published in The BMJ, is the most systematic yet by researchers assessing publicly announced pre-orders of vaccines ahead of their regulatory approval, and where the doses will go.

On the plus side, in a best case scenario global production next year could create enough vaccines to immunize some 5.96 billion people by December 2021, the paper finds. That’s nearly 80% of the global population

However, current procurement patterns suggest that purchases may be very skewered – with rich countries stockpiling large amounts of vaccines and some poorer countries not receiving any at all, says the study.

The assessment, undertaken by a team of experts from Johns Hopkins Bloomberg School of Public Health, found that more than half of the 7.48 billion doses of the most advanced vaccines, which have already been pre-reserved, would be shipped to high-income countries, whose populations account for just 14% of the world total.

That leaves only about 40% of total doses available for distribution to low- and middle-income countries (LMICs), which comprise more than 85% of the world’s population – if rich countries don’t snap up even more.

Decisions on how equitably the remaining doses are distributed will thus determine whether a significant portion of the global population would be immunized by the end of the next year – other whether some countries still face large immunization gaps. 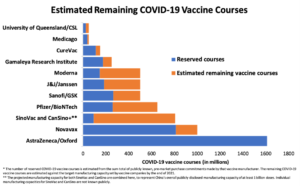 Peer Reviewed Study on Distribution Issue is a First

Discourse surrounding vaccine nationalism and equitable distribution has so far been delivered in large part through politicised messages or institutional warnings. The appearance of a peer reviewed study – and as the UK and US begin vaccinating their more vulnerable populations – provides a rigorous reminder that the COVID pandemic will linger long past the Global North’s immunisation.

That such a massive portion of the population – realistically, those living in low- and middle-income countries (LMICs) – would be left behind illustrates that the significant steps made this year towards achieving vaccine equity still is not enough.

EU Considers Donating 5% of Its Vaccines to LMICs

In related news, the European Union is considering an initiative whereby LMICs would receive 5% of the COVID vaccines the European Union (EU) has ordered.  However some critics say that the move could also undermine the aims of the WHO-led COVAX Facility to create a global pool of vaccine procurement and exchange, including poor countries.

An internal document drafted up by the French government, and secured by Reuters, set targets for vaccine donations, under the presumpton that EU would wind up with surplus doses – due to its pre-orders with a range of vaccine manufacturers with vaccines that have now been approved or are in advnaced stages of trials.

Donating 5% of the 1.3 billion vaccines the EU has so far secured would mean that up to 65 million vaccine doses could be administered to those living in LMICs.

It is so far unclear, however, whether the EU would donate 5% of its initial 280 million Pfizer/BioNTech and Moderna doses, given its population is nearly double that number – and those vaccines are the first becoming available to the public.

The plan could step on the toes of WHO’s own vaccine procurement program, COVAX, which aims to provide 2 billion shots to countries around the world by the end of 2021.

The arm of the COVAX scheme procuring supplies for LMICs, however, is still reliant upon donations in a period where rich countries have also seen big economic setbacks. And despite donation pledges from 64 high-income countries to the facility, which is co-led by Gavi, the Vaccine Alliance, WHO director general Dr Tedros Adhanom Ghebreyesus has said that billions more in support is still needed. At a recent WHO media briefing he urged leading donor nations to turn their pledges of support for the COVAX facility into action.

As one anonymous source working with COVAX told Reuters: “The more governments become active outside the (COVAX) facility, the more the international community as a whole starts to lean towards compromising the basic principles of equitable allocation.”