IBADAN – On Sunday 1 August, two planes carrying four million doses of the Moderna vaccine from the US touched down in Abuja, Nigeria’s capital city.

With the arrival of the new doses, Nigeria will be able to resume its COVID-19 vaccination programme which was suspended on 22 July when the Nigeria Primary Healthcare Development Agency (NPHCDA) announced it had exhausted the four million doses of Covishield (Oxford/AstraZeneca COVID vaccine) the country got via the COVAX facility.

Even though Nigeria’s delivery was the largest shipment by COVAX at the time, it was a drop in the ocean that did not do much in closing the vaccination gap in Nigeria, which has a population of over 211 million people.

At present, only 1.4 million people are fully vaccinated, which represents 0.68% of the population.

“We are excited that this [delivery] presents another opportunity for us to advance the protection of Nigerians against the COVID-19 virus, especially against the Delta variant,” said Dr Faisal Shuaib, NPHCDA’s Executive Director.

4 million vaccine doses donated by the US have arrived in #Nigeria. Through @USAID, the US has also provided $125 million in direct COVID-19 relief—all part of our commitment to supporting Nigerians in responding to the pandemic & sharing America’s vaccine supply with the world. pic.twitter.com/o8tN9Kg9hg

The rollout plan is re-started

According to Shuaib, the Moderna vaccines will first be tested by country’s regulatory agency to ascertain they are up to the country’s standard as established by the regulator.

“Random samples of the vaccines have been taken and are being tested. Within 48 hours they will give us feedback on whether we are good to go,” Shuaib told journalists in Abuja.

When the vaccines become certified, NPHCDA said it will then activate its comprehensive logistic deployment plan at sub-national level in partnership with the Coalition Against COVID-19 (CACOVID), a private sector-led organization.

“This is particularly important because we are already experiencing a third wave and there is no need for the vaccine to be at the national level while they are needed by our citizens,” Shuaib said.

Through the CACOVID partnership, vaccines will be distributed and transported to the respective states via the distribution channels that were utilised for the first set of doses received. When these get to their destinations, local health authorities will then redistribute them to centers where the doses will be administered, while still maintaining a cold chain.

Nigerians who want to be vaccinated need to complete an online registration on a dedicated platform operated by the NPHCDA. From the platform, an appointment date for the vaccination exercise is obtained when the individual is expected to visit the health center.

But the reality of the first phase of the vaccination showed appointment dates and locations were not enforced as vaccination officers only required proof of online registration to give vaccine doses to recipients.

After receiving a vaccination, an individual is given a vaccination card that contains the date and details of the administered vaccine. It also contains the expected date for the second dose if the person receives a two-dose vaccine.

Even though there is growing evidence to support mixing vaccine types, the Nigerian government is still reluctant to direct citizens that received Covishield (AstraZeneca) as first dose to get  Moderna as second dose as it argues that additional Covishield vaccine doses will soon be available in the country.

In spite of Nigeria’s extensive COVID-19 vaccination rollout plans, there are still concerns about how the country will track the side effects of the vaccines which appear to hinge on patients presenting to government hospitals with symptoms. Experts described this as inadequate but admitted that the unprecedented pressure on the health authorities to quickly roll out vaccines may have limited the available options.

“Don’t forget that nothing as huge as this one has never been done. It’s not too much to ask that when there are scenarios, such are taken to government hospitals where they can be escalated and tracked,” Bimbo Ibukunoluwa, a primary healthcare worker in Ibadan southwest Nigeria, told Health Policy Watch.

When Dr Chikwe Ihekweazu, Director-General of the Nigeria Centre for Disease Control (NCDC), spoke to Health Policy Watch in late June 2021, the country’s COVID-19 epicurve suggested the pandemic was under control.

However, the latest epicurve suggested that a third wave is gradually emerging in the country, although this varies from one state to another.

In Lagos, Nigeria’s commercial epicenter, there are indications that a third wave is already underway with recent cases already reaching reported figures for the peak of the first wave. But in Abuja, the number of daily cases remains very low in comparison with the first and second waves.

But the true case load is hard to ascertain as testing remains inadequate. Over a year after the first case was confirmed, Nigeria has only conducted about 2.5 million tests so far.

There is also an unequal distribution of testing among Nigeria’s 36 states. According to NCDC’s COVID-19 situation report, while states like Lagos have tested over 626,000 people since the pandemic began, Kogi state which is inhabited by about five million people has only conducted about 6,000 COVID tests as at 25 July.

But this is not peculiar to Nigeria. Dr John Nkengasong, Director of the Africa CDC, told Health Policy Watch that Africa is still not conducting enough tests.

“The continent is not testing enough. We would like to see a steady increase over time because the foundation for fighting any infectious disease is good testing. And we have to test at scale all the time and maintain that level of testing,” he said.

Furthermore, only eight African countries have a system to measure excess mortality and Nigeria is not one of them – so it is hard to see whether the pandemic causing abnormally high deaths. 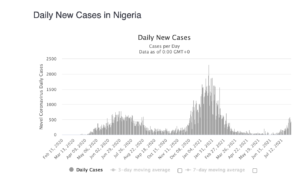 Ihekweazu and Shuaib expressed confidence in Nigeria’s response to COVID and preparedness for the massive rollout of millions of doses of different vaccines requiring different conditions, respectively.

“I do not believe that all African countries are prepared, there are countries that require some support,” the minister said.

“We are very worried because of our population, and the similarity with India – with high population density and the fervor for politics and religion, which lead people very often to ignore the public health advisories that we have put in place.”

He added that Nigeria’s COVID response, including vaccine rollout, will benefit from risk communication and community engagement.

“I don’t think that this can be done in a very short time but there’s absolutely a lot of emphasis and pressure put on governments across Africa, to wake up to the risks,” he said.

Compounding difficulties with the rollout, doctors in Nigerian state hospitals have begun a strike over pay, benefits and poor working conditions. The strike is organised by the National Association of Resident Doctors, which represents about 40% of doctors in the country.

Nigeria is expecting doses of vaccines from COVAX, the African Union’s COVID-19 Vaccine Acquisition Task Team (AVATT), and donations from various sources including this week’s US donation.

From August, Enahire said Nigeria is expecting over 29 million doses of J&J vaccine through AVATT.

“From the end of July through August, and beyond, we are going to have more doses, and more varieties,” the minister said.

Furthermore, Nigeria’s National Agency for Food and Drug Administration and Control (NAFDAC) has also issued authorisation for the AstraZeneca, Johnson & Johnson, Pfizer and Moderna vaccines while Enahire expressed confidence in the country’s ability to meet the storage requirements of the various vaccines, including those that require ultracold chain, and those that require direct refrigeration.

Even though he said there are ongoing collaborations to ensure the doses are quickly distributed and administered, he noted that emphases are being placed on states that are considered as the hotspots of the pandemic in the country.

“We are looking to scale up the vaccination capacity right across the whole country, with a little bit of emphasis on those areas that are already the hotspots,” Enahire said.

With expanded vaccine access the main goal of Nigeria’s endgame for COVID, Ihekweazu said attention should be on sustaining the gains and securing more doses.

“So the key thing now is to hold on to the fragile successes that we’ve had, [and] continue pushing for more vaccines so that we can get more shots into the arms of our people as quickly as possible,” Ihekweazu told Health Policy Watch.

Nigeria is one of the 21 African countries where the Delta variant of the SARS-CoV-2 virus has been reported. Ihekweazu told Health Policy Watch that the variant is becoming worrisome for the country’s public health officials.

He described quick access to vaccines as a major way through which Nigeria can limit the impact of the pandemic on its people.

“The good thing is that the variant is still very susceptible to the vaccines. So as we increase our vaccine coverage rates, we will continue to protect ourselves even against the Delta variant,” Ihekweazu said.

With reports of health systems in several African countries becoming overwhelmed and overrun by the Delta variant, Nigerians who were initially reluctant to get vaccinated are now more interested, including a nurse on a psychiatry ward at Nigeria’s first teaching hospital, the University College Hospital in Ibadan.

Initially, Nurse Shade (name changed to protect her identity) refused to be vaccinated because her church pastor, inspired by US-based right wing anti-vaccine messages, preached against the vaccine to his Nigerian congregation.

But with daily reports of deaths due to the Delta variant among the unvaccinated, Shade became afraid and was anxious to quickly receive the jab. However, registration had closed and she would now wait until vaccination resumes.

“Since I heard that one is more likely to die of COVID if one is not vaccinated, I’ve felt very stupid for failing to receive the vaccine when I could easily get it. Now I daily listen to news for updates on when the next round will begin,” she told Health Policy Watch.

Nkengasong also revealed the success of vaccine rollout in many African countries has also shore up confidence for the exercise among the people considering healthcare workers were the first to receive the doses.

“People are seeing that nothing happened to those who received the vaccines against what the misinformation made them to believe. It has been shown that if the vaccines are available, Africans will receive the vaccine,” Nkengasong said.