IBADAN – The Nigerian government has decided to move ahead with a second dose of the AstraZeneca vaccine for the nearly 2 million citizens who already received the vaccine – despite advice from Africa CDC and the World Health Organization (WHO), that vaccine-strapped African countries could also choose to administer just one vaccine dose  – so as to reach as many citizens as possible very quickly.

The decision to shun the Africa CDC and WHO advice comes at a critical moment. On the one hand, cases in Nigeria seem to be plateauing right now. On the other, national and regional officials are eyeing nervously India’s crisis – and ramping up oxygen supplies in the event of a third wave here and imposing a lockdown for the Muslim Eid al-Fitr holiday taking place this week.

But insofar as the country is planning to shift to the one-shot Johnson & Johnson vaccine, with deliveries, hopefully to begin by September, officials seem prepared to take a calculated risk and finish off the remaining supply of AstraZeneca doses among those who have already received the jab.

Speaking at a press briefing on Thursday, Dr Faisal Shuaib, Executive Director and CEO of Nigeria’s National Primary Health Care Development Agency (NPHCDA), said the country would much rather ensure the full vaccination(two doses) of those who had already received the first dose of the vaccine as recommended by its manufacturer, AstraZeneca.

This means that the four million doses Nigeria received via the COVAX Facility will only reach two million people – half of what it could have reached if health authorities used the available doses to vaccinate up to four million Nigerians as recommended by the WHO and the Africa CDC.

“Nigeria’s presidential steering committee made a strategic choice to utilise our current COVID-19 vaccine supply to administer double doses rather than single doses. This will ensure that every Nigerian who receives a vaccine from our present supply receives their second dose within the recommended time frame.”

Shuaib said that administration of the two doses on time – even to a more limited group of people: “ is very important to ensure the population benefits from the vaccine.”

In April this year, Health Policy Watch reported that the Africa CDC warned that the administration of the second jab was threatened in many African countries – citing then the case of Rwanda, which had already used up all of its vaccine doses.

The shipment delivery plans of vaccines were disrupted by the government of India’s decision  to direct the Serum Institute of India (SII) to halt the export of vaccine doses as a result of the country’s burgeoning COVID-19 pandemic.

At that point, Africa CDC recommended that countries vaccinate as many citizens as possible with their initial shipments of doses – without holding back reserves for a second dose. While Dr John Nkengasong, Director of the Africa CDC said implications of the delay in receiving the second vaccine dose was unknown, he assured recipients of the first dose that they already would have acquired some form of immune protection against the virus.

“We don’t know that delay by a couple of months or weeks, will impair the ability to boost it (immune system) when you get a second dose. I don’t think so. It’s just that it doesn’t give you that full range of your immune system reacting and getting ready to fight the virus once you get exposed to it. But they can be assured that with the first dose, they are already getting some protection from developing disease,” Nkengasong said.

The WHO’s position on maximising vaccinations with available doses is similar to that of Africa CDC. Dr Richard Mihigo, Immunisation and Vaccine Development Programme Coordinator at the WHO Regional Office for Africa, said: “African countries, I must say, took the right decision with the limited supply, to use most of their doses as the first dose with the expectation that the second dose will come quite soon.”

To date, 1,748,242 Nigerians, out of a population of 200 million, have been vaccinated with one dose of the AstraZeneca vaccine. But even though the total proportions are small, they still represent 86.9% of the high risk groups of frontline health workers and older people, particularly those with underlying conditions who were targeted first, according to Shuaib. The successful roll out of the COVID-19 vaccine could play a major role “in helping the country to better cope with the pandemic”, he said.

“We have rolled out a digitised registration and immunisation data system. This is the first of its kind in Nigeria. This is to help ensure efficiency and accountability in our initial rollout. We are continuing to optimise the system, and we are seeing its benefits,” Shuaib said.

Steady Decline and Plateauing of the COVID Pandemic

After peaking in mid-January at around 1,400 reported cases a day, new COVID-19 infections  in Nigeria have been in a slow decline, plateauing at a few dozen new cases daily in May, with just 38 cases reported on May 10.

Official data released by the Nigeria Centre for Disease Control (NCDC), show that 165,515 cases of COVID-19 have been confirmed in Nigeria, Africa’s most populous country, with 2,065 deaths. However, recent global estimates have documented how many cases in African countries also go under-reported, escaping  the radar of official data.

Risk of Imcomplete Immunisation “Too High”

Despite the reassuring statistics, Nigeria is not taking any risks, Shuaib told Health Policy Watch.

And incomplete immunisation of highly vulnerable groups that already got the first AstraZeneca vaccine dose, is one such risk that was “too high”, and which the country wants to avoid, he said.

“What we did in Nigeria was to actually divide the four million doses we got into two compartments. We have around two million doses that we plan to give exactly the same people that have gotten their first doses.” he said.

Moreover, Nigeria had already started administering the second dose of the vaccine to those who have received the first dose – before the latest Africa CDC advance, as well as information about vaccine supplies was available, he said. Continuing one course with the plan will reinforce confidence in the overall vaccination programme, he added:

“Nigerians have shown incredible interest in receiving the vaccine and cooperating with our health teams to have the system succeed. This is incredibly important because, to move beyond COVID-19, this must be a national effort.”

Preparing for a Third Wave 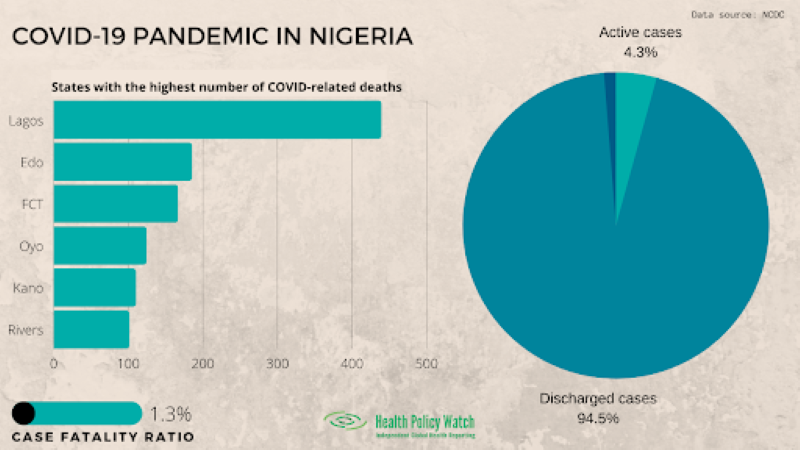 With a case fatality ratio of 1.3%, Shuaib said Nigeria is taking other key  measures to improve its health system’s ability to withstand a third wave of the COVID-19 pandemic, should one occur, and this includes expanding the country’s medical oxygen capacity nationwide.

In Lagos state, which has been the epicentre of the pandemic in Nigeria, accounting for over 35% of all confirmed cases in the country, Shuaib announced up to four oxygen producing plants are being established to enable the country to combat oxygen shortage.

“There’s no doubt about the fact that we need to ramp up our capacity to provide oxygen, because this is something that can happen anytime, oxygen shortage can happen in any country,” he said.

Also speaking at Thursday’s briefing, hosted by the WHO’s African Regional Office, Nkengasong said the Africa CDC is supporting African countries to expand their oxygen supply chain as a key component of the continent’s response strategy to combating COVID-19 and ensuring that African countries do not get complacent with their disease response.

“This is part of the adaptive strategy which calls for enhanced prevention, enhanced monitoring and enhanced treatment—especially making sure that oxygen is available, and that we do not get complacent with where we are with the pandemic. We saw what happened in India,” he added.

While Shuaib was addressing journalists from his office in Nigeria’s capital city of Abuja, a development of public health importance was ongoing across the country – which was observing a public holiday to commemorate Eid al-Fitr at the end of the Ramadan fast—in a country that is home to the world’s fifth-largest Muslim population – and where Muslim’s make up about one-half of Nigeria’s population.

To avert a possible surge in the number of COVID-19 cases as a result of the Ramadan festivities, the Nigerian government reintroduced nationwide curfews and other movement and public gathering restriction measures this week.

“We shall maintain restrictions on mass gatherings in and outside work settings with a maximum number of 50 people in any enclosed space, approved gatherings must be held, maintaining physical distancing and other non-pharmaceutical measures,” said Nigeria’s National COVID-19 Incident Manager, Mukhtar Mohammed.

Related
How Do You Define ‘Diversity’ and ‘Dignity’ in Global Health?
TDR Supported Series
After Declaring Emergency – US Weighs Intradermal Monkeypox Vaccine Injections to Stretch One Dose into Five
Monkeypox
Thanks to COVID-19, Alarm Grows Over Drug Resistant Infections
Antimicrobial Resistance

Related
How Do You Define ‘Diversity’ and ‘Dignity’ in Global Health?
TDR Supported Series
After Declaring Emergency – US Weighs Intradermal Monkeypox Vaccine Injections to Stretch One Dose into Five
Monkeypox
Thanks to COVID-19, Alarm Grows Over Drug Resistant Infections
Antimicrobial Resistance