Child vaccination targets of at least 80 percent coverage in low- and middle-income countries, are regularly being missed. To better understand why this is happening, a new study created high resolution maps of vaccine coverage to identify disparities within countries and to inform effective strategies to increase coverage and access.

The study, Mapping vaccination coverage to explore the effects of delivery mechanisms and inform vaccination strategies, led by the University of Southampton-UK and published in the journal Nature Communications, found that immunization targets were regularly being missed due to a range of constraints that varied between countries. 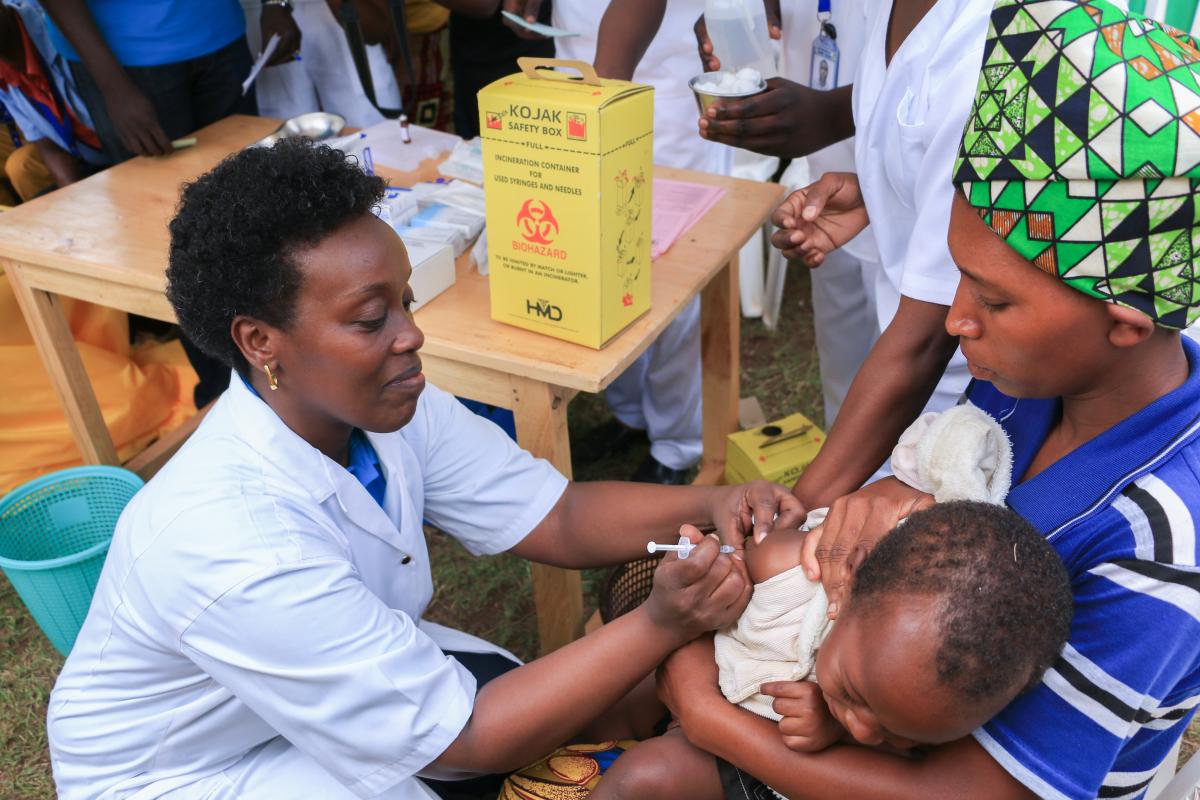 It found that poverty, remoteness of target areas in relation to distance between settlements and major urban areas, population density, availability of infrastructure including roads and electricity all affected success rates in delivering vaccines, with impact varying from one country to the other.

Other factors included literacy levels, availability of the vaccines and at times willingness by the populations to have their children vaccinated.

The study focused on the five countries of Nigeria, Ethiopia, the Democratic Republic of Congo (DRC), Cambodia and Mozambique, and used data collected from national demographic surveys conducted between 2011 and 2016.

“The recent increasing call for subnational health metrics as part of monitoring equity has generated substantial interest in producing high-resolution maps of vaccination coverage and the associated uncertainties to support program planning and implementation,” the study says.

The geographers from the University of Southampton’s WorldPop group map-predicted coverage at 1 × 1 km “spatial resolution” in the five countries, to identify areas that are under-vaccinated through each delivery method using the data from the demographic and health surveys.

“The success of any vaccine delivery strategy lies not only with a good geographical spread, but also in ensuring coverage level among the population is high enough to stop the spread of the disease. We hope our fine spatial scale and regional maps will help countries to understand in greater detail where coverage is low and decide what further interventions are needed in specific areas to work towards disease elimination,” Chigozie Edson Utazi, lead researcher for the study, said in a press release.

The WHO’s Expanded Programme on Immunization established in 1974, with the core being routine immunization (RI), has become a critical component of health systems, ensuring regular provision of immunization services to populations, the authors observe.

The focus of the mass vaccination campaigns lies in interrupting disease circulation and “generation of herd immunity” helping in disease control and elimination efforts.

However, periodic supplementary efforts have become a mechanism for boosting immunization coverage and filling immunity gaps in many low- and middle-income countries with weak health systems, it notes.

While routine immunization (RI) for most conditions is administered at infancy before a child attains the age of one year, supplementary immunization activities (SIAs) are usually mass vaccinations later in life to complement RI, and prevent possible epidemics of preventable diseases.

In Africa, SIAs against polio led by the WHO have become a common feature in recent years, after cases of the crippling disease were reported in Nigeria and Somalia, among other countries.

Being critical for the control of diseases that threaten public health, SIAs are usually well-publicized and well-funded campaigns that, unlike RI, are usually delivered to families at home rather than in health facilities, to ensure maximum reach.

The report concludes that because SIAs had boosted coverage rates in areas where RI had recorded poor coverage rates, intensified and more targeted strategies will be required to improve coverage levels in all underperforming areas, particularly where there is a coincidence of poor RI and SIA performance, if disease elimination goals are to be reached.

The report analysed the results of data collected in each of the five countries of Nigeria, Cambodia, Mozambique, the DRC and Ethiopia, as illustrated in Figure 3 below. It considered a range of vaccines with different delivery mechanisms, and observed differing patterns and probable causes for unimpressive immunization coverage. 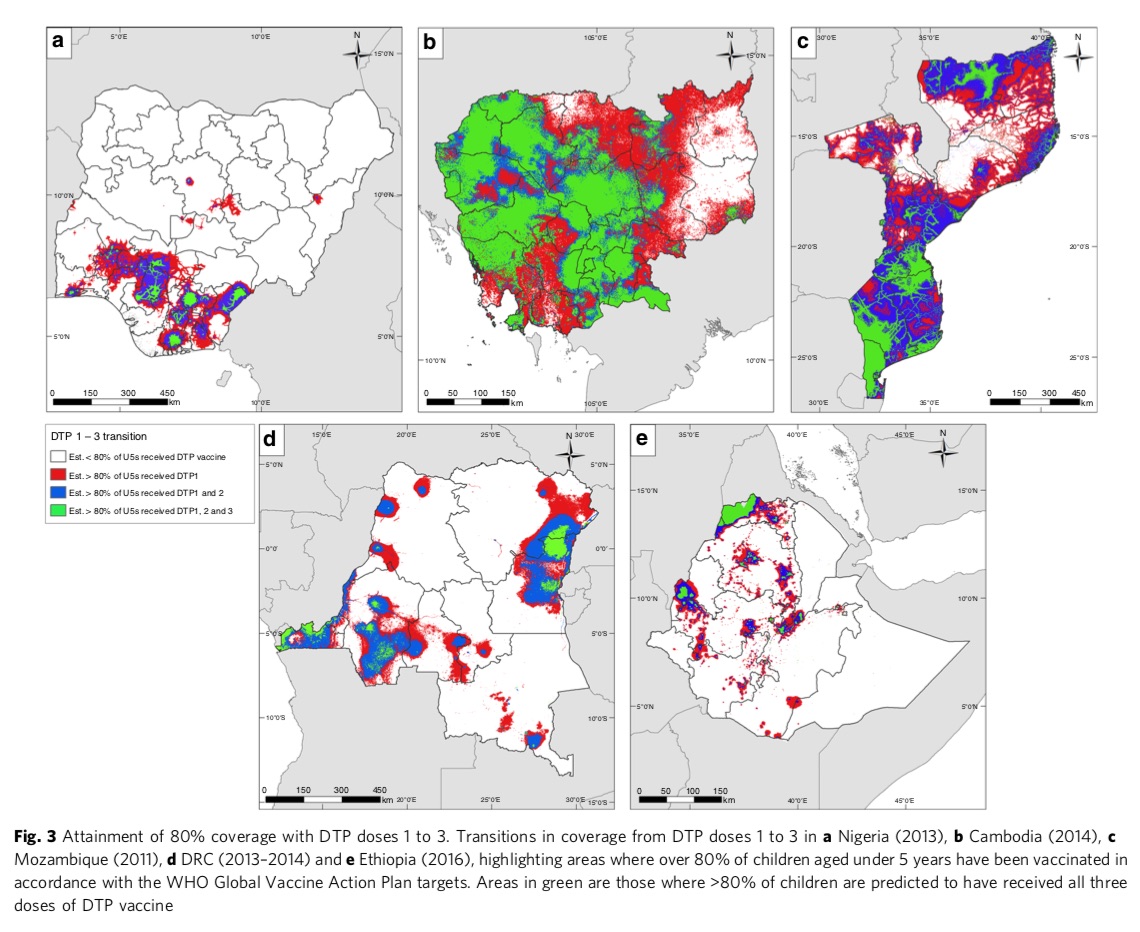 In Nigeria, for example, a major north–south divide was observed, with coverage levels for all vaccines remaining “consistently low” in most of the northern region, and high in some parts of the south.

In Ethiopia, a significant east–west divide was observed with regard to the Diphtheria-1 vaccine, with higher coverage levels in the west compared to the less densely populated east of the country. Similarly, coverage for Diphtheria-3 for the East African country was low in remote rural areas.

“In contrast, coverage levels in Cambodia and Mozambique were generally higher and more homogeneous, although some underperforming areas persist. These can be found in eastern Cambodia and central and northern parts of Mozambique and are more visible in the Diphtheria-3 coverage,” it notes.

The results suggested that repeated targeted campaigns can make a big difference to immunization service delivery, especially in areas with poor routine immunization coverage, according to lead researcher Utazi.

Despite the long history of routine and supplementary campaigns in control and elimination programs, little is known about spatial variation in their relative effectiveness in many countries, the authors say.

The researchers hope to build on their work by extending it to other countries, and conducting further studies to incorporate data on treatment-seeking behavior, travel time to health facilities and mobile phone network coverage, hoping that this could lead to the design of more tailored and effective vaccination delivery programs.

The study was funded by the Bill and Melinda Gates Foundation, and also involved scientists from Penn State and Princeton universities, Johns Hopkins Bloomberg School of Public Health-US, and London School of Hygiene and Tropical Medicine.