CAPE TOWN – A new COVID-19 variant with a “very unusual constellation of mutations” – currently referred to as B.1.1.529 – has been identified in southern Africa, South Africa’s Health Ministry announced on Thursday.

On Friday, WHO dubbed the variant “Omicron”, adding it to its list of variants of concern – even as the European Union, the United Kingdom, the United States and Israel slapped a new round of restrictions on incoming travelers from South Africa and other southern African countries where it has been identified.

The variant has over 30 mutations in spike protein, the site usually targetted by COVID-19 vaccines, according to Professor Tulio de Oliveira, Director of South Africa’s Centre for Epidemic Response and Innovation.

“The mutation profile is predicted to give significant immune evasion and enhanced transmissibility, and urgent work has already started to understand its full significance,” said De Oliveira.

Some of the mutations are associated with resistance to neutralizing antibodies (and therapeutic monoclonal antibodies from vaccines), more efficient cell entry and the evasion of innate immunity, which could enhance transmissibility, as well as increased infectivity, De Oliveira told a health ministry media briefing on Thursday. 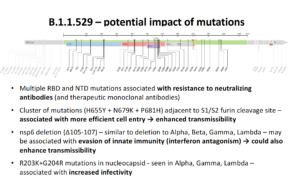 South African officials are meeting with the World Health Organization (WHO) on Friday to brief it about the development.

The first case of this variant was identified in Botswana while a man who arrived in Hong Kong from South Africa recently also had the variant.

“Twenty-two positive cases of variant B.1.1.529 have been recorded in [South Africa] following genomic sequencing collaborations between the National Institute for Communicable Diseases (NICD) and private laboratories,” the NICD reported.

“Although the data is limited, our experts are working overtime with all the established surveillance systems to understand the new variant and what the potential implications could be,” said Professor Adrian Puren, NICD Acting Executive Director.

“Developments are occurring at a rapid pace and the public has our assurance that we will keep them up to date.”

Cases in South Africa have been low until two weeks ago when an outbreak traced to a student gathering in Gauteng province was identified as a super-spreader.

Detected cases and percent testing positive are both increasing quickly, particularly in the north of South Africa, according to the NICD.

“The new variant has been detected in multiple samples from across Gauteng, and public and private testing laboratories in Gauteng have noticed a significant and rapid increase in detection of variant (which can be identified via a PCR proxy), and is now increasing in other provinces.”

Dr Michelle Groome, Head of the Division of Public Health Surveillance and Response at the NICD, said that provincial health authorities remain on high alert and are prioritising the sequencing of COVID-19 positive samples.

She stresses that regardless of the emergence of new COVID-19 variants, the importance of non-pharmaceutical interventions remains unchanged and the public are urged to be responsible.