At least 70% of women should be screened for cervical cancer via high-performing DNA-based tests to identify the human papillomavirus (HPV), not a visual inspection with acetic acid or a Pap smear, which are more common.

The HPV DNA test is not only more accurate, but it is also more cost-effective, according to the World Health Organization (WHO), which launched new guidelines on screening and treatment to prevent cervical cancer on Tuesday.

“Effective and accessible cervical screening and treatment programmes in every country are non-negotiable if we are going to end the unimaginable suffering caused by cervical cancer,” said Dr Nono Simelela, WHO Assistant Director-General for Strategic Programmatic Priorities: Cervical Cancer Elimination.

“This new WHO guideline will guide public health investment in better diagnostic tools, stronger implementation processes and more acceptable options for screening to reach more women –  and save more lives,” she told a webinar to launch the guidelines.

Last year more than half a million women contracted cervical cancer, and about 342 000 women died as a result – most in the poorest countries.

The guidelines recommend important shifts in care, including more access to self-sampling to achieve the goal of having 70% of women aged between 35 and 40 tested by 2030 and at least 90% of people who need treatment to receive it.

“Studies show that women often feel more comfortable taking their own samples, for instance in the comfort of their own home, rather than going to see a provider for screening. However, women need to receive appropriate support to feel confident in managing the process,” WHO said in a statement.

This, said WHO, paired with screening women for HPV and vaccinating girls against HPV, may help prevent more than 62 million deaths from cervical cancer in the next century. 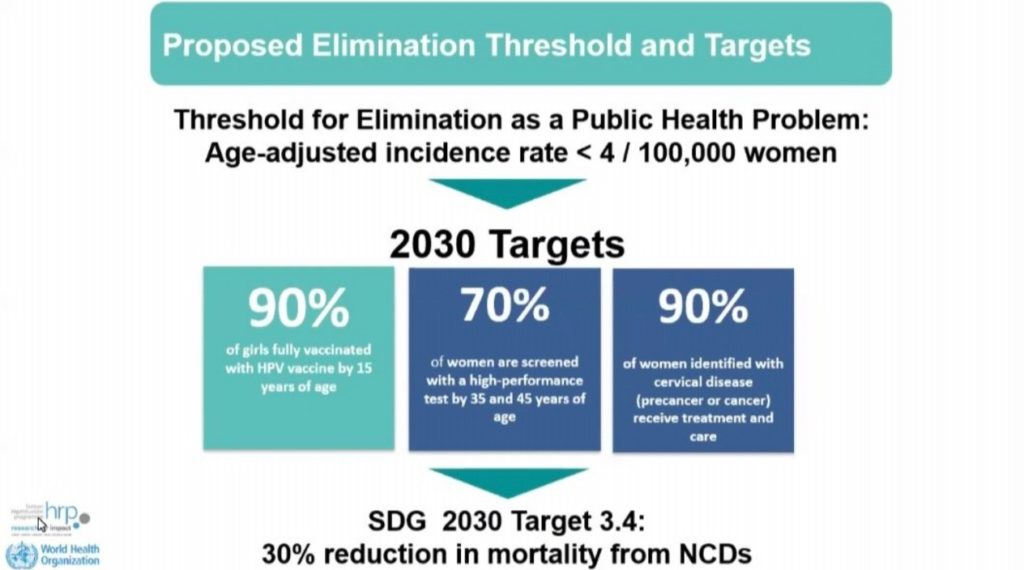 Several experts also highlighted the need for more research, training of health professionals and destigmatising the disease to combat one of the biggest killers of women, particularly those in poor countries.

They said research into HPV should not only be focused on medical objectives, but should include social and political activism if deaths are to be prevented.

“It’s a disease of saving some lives over others,” said Denny who called on research to be extended to patients’ history and the social impacts of women post HPV-diagnosis.

“When we talk about research, we have to talk about where are our patients coming from. What are they experiencing on a day-to-day basis and what are we as researchers, and healthcare professionals hearing,” said Denny.

“There have been some studies [that show] that if a woman dies and her child is under the age of 10, the chances that that child will live to 10-years-old are about 25%. And this is what’s happening in many, many countries as well where women are dying, and have young children in communities that often are unable to take care of these children without the support of the mother.”

Responding to the Link Between HPV and HIV 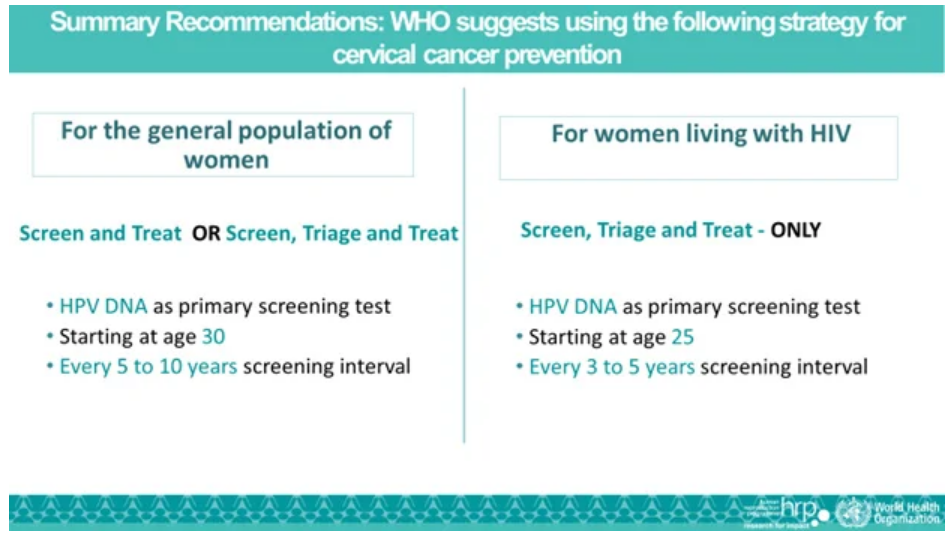 And while experts called for more research into HPV, WHO said more emphasis needs to be made on the link between HPV and HIV, as women with HIV are six times more likely to get HPV than those without HIV.

With HPV being the main driver behind most cervical cancer diagnoses, this cannot be overlooked.  The guidelines state that women with HIV should start cervical cancer screening at an earlier age (25) as opposed to the general population recommendation of 30 years.

“With these new guidelines, we must leverage the platforms already developed for HIV care and treatment to better integrate cervical cancer screening and treatment to meet the health needs and rights of the diverse group of women living with HIV to increase access, improve coverage, and save lives,” said Dr Meg Doherty, Director of WHO’s Department of Global HIV, Hepatitis and Sexually Transmitted Infections Programmes.

WHO recommends that all women who test positive for cervical cancer should receive treatment soon after diagnosis.

“Cost-effectiveness of screening tests is important for scaling up programmes, but other aspects of the public health approach to eliminating cervical cancer are also vital,” said Dr. Nathalie Broutet, WHO Department of Sexual and Reproductive Health and Research and HRP. “What matters most is the coherence of every country’s programme in ensuring the continuum of care: that all women have access to screening, health care providers are informed in a timely manner about the results of the screening test and can in turn share this information with their client, and that women can access appropriate treatment or referral if needed.”

Professor Groesbeck Parham, Director of the CIDRZ Cervical Cancer Prevention Program, professor of gynaecological oncology at UNC-Chapel Hill, agreed with Denny and said that despite technological advances in trying to understand cervical cancer, “we won’t get very far unless we put this disease in the women who have it in the proper social context”

“That’s the only thing that’s going to drive this off the planet as a social movement, because it is a social disease. Women diagnosed with HPV are often stigmatised and live in shame, and this needs to be addressed, said Parham.