Malawi on Wednesday burned nearly 20,000 doses of expired AstraZeneca COVID-19 vaccines. The government move happened shortly after the Serum Institute of India (SII) announced that it would only resume its export of the precious vaccines to the rest of the world at the end of 2021 – due to the still burning pandemic crisis on the Indian subcontinent.

Malawian health authorities said that they had incinerated 19, 610 doses of the vaccines, produced by the SII, at the Kamuza Central Hospital in the capital Lilongwe – which the country had been unable to administer prior to expiration.

The vaccines were the remainder of a batch of 102, 000 doses that arrived in Malawi on 26 March – with some doses marked with an expiration date that was just 18 days later, or 13 April, said health secretary Charles Mwansambo in a statement. 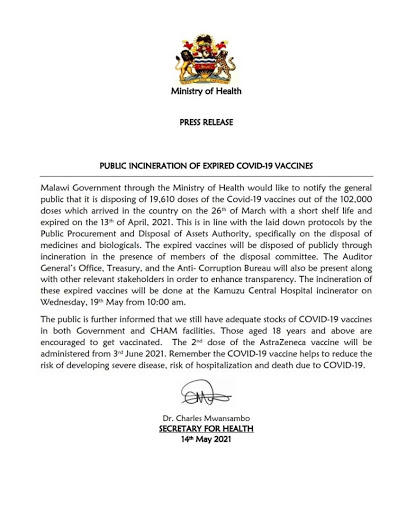 The decision to destroy the vaccines goes against early pleas by the Africa CDC and the World Health Organization. Last month the two organisations urged African countries not to destroy COVID-19 vaccines that had passed their expiration dates, saying they were still safe to use.

Africa CDC director, John Nkengasong, citing the example of the Democratic Republic of Congo, said that instead of destroying vaccines, countries should redistribute vaccines that they cannot use to other Member States.

“During a time where access to COVID-19 vaccines is particularly difficult for Africa, utilising an entire vaccine consignment could have been accomplished without much challenge,” said director Africa CDC, John Nkengasong said on 6 May during a weekly briefing.

If, for example, governments set a goal of administering a minimum of 5, 000 vaccine doses per day for just 10 days, an entire consignment of vaccines would be fully utilised well before the listed manufacturer expiration date, said Nkengasong.

Malawi’s destruction of the vaccine should be a lesson to other countries to better plan their vaccination programmes, said Professor Pontiano Kaleebu of the Uganda Virus Research Institute and London School of Hygiene and Tropical Medicine

“What happened in Malawi is a learning experience and should be used to encourage people to get vaccinated so that the vaccines do not expire elsewhere. Many people in Africa have not come to get the vaccine, which is not what we expected. It is a big problem that needs to be addressed,” Kaleebu added.

Said Nkengasong: “Given the urgent need to save as many lives as possible, countries were informed by the Africa CDC to vaccinate quickly. It is indeed, critical to use such donations in a timely fashion in order to save lives and bring the pandemic to an end on the continent”.

Message To Not Destroy Came Too Late

The Malawian government however contends that the communication from the WHO and Africa CDC came too late.

Health Ministry spokesperson Joshua Malango telling Health Policy Watch that by the time they received communication they had already removed the vaccines from the cold storage systems and it was deemed unfit for use.

“By the 14th of April we had already removed the unused COVID-19 vaccines from the refrigerators,” said Malango, adding that the communication from WHO came in after Malawi had sought clarity from the SII, from which the vaccines were procured. The SII, said Malango, had formally responded , indicating an approved “shelf-life extension” for an additional three months, through 13 July 2021.

Out of a population of about 18 million people, the country has recorded 34,232 confirmed coronavirus cases and 1,153 deaths. To date,  the country has vaccinated 330,336 people. 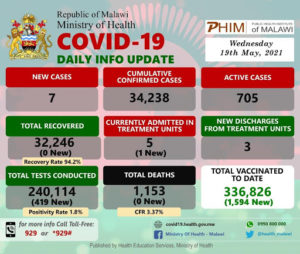 The country received  360,000 AstraZeneca doses from the COVAX facility in March and received another batch of 50,000 of the same dose from the Indian government.  The expired doses were part of a donation from the African Union.

At a media briefing, Mwansambo assured Malawians that “we still have adequate stocks of COVID-19 vaccines”, and that a second dose of AstraZeneca would be administered  to high-risk groups that had received their first dose, beginning on 3 June. Mwansambo also told reporters that health officials had been concerned that using expired vaccines could scare off people from getting vaccinated.

WHO and partners released guidance on COVID-19 vaccination planning and deployment for national governments, with the aim to help them design strategies for the deployment, implementation, and monitoring of COVID-19 vaccines and better integrate their strategies and financing to boost efficiency.

The global health body advised countries that prior to receiving the vaccines they should thoroughly prepare and ensure the logistics including cold chain maintenance, training of health workers, a system to manage the demands of injections devices-syringes and needles, and to follow adverse events. Countries also have to pre-register and create databases for vaccine uptake.

Exports of AstraZeneca from SII by End of 2021

Meanwhile, in a statement on Tuesday, Serum Institute of India chief Adar Poonawalla said that SII is scaling up its manufacture of vaccines, but would be prioritising India for the remainder of 2021.

“We also hope to start delivering to COVAX and other countries by the end of this year,” he said in the statement.

Poonawalla said there has been intense discussion between SII, the Indian government and other vaccine manufacturers in the past few days on the export of vaccines.

Although SII had commitments to the COVAX facility, he said that the domestic needs still take precedence and the vaccination drive in India “cannot be completed within two to three months, as there are several factors and challenges involved”.