Nine months after a historic high-level UN meeting where countries pledged to end the global tuberculosis epidemic by 2030, a chronic lack of R&D financing jeopardises that ambitious goal, said expert panelists at a briefing on the TB R&D landscape last week in Geneva, hosted by South Africa’s Permanent Mission to the UN.

While there are now more TB drugs in the development pipeline, massive funding as well as other types of policy and institutional support are needed to support the large and decentralized network of small and medium enterprises, research groups, and public-private partnerships aspiring to bring new tools to market, said panelists at the event on “The Way Forward for TB: Innovation and Research.”

Tuberculosis remains among the top 10 causes of death worldwide. In 2017, TB caused an estimated 1.6 million deaths, including 300,000 deaths among HIV-positive people, according to WHO’s Global Tuberculosis Report 2018 [pdf]. The situation is aggravated by growing incidence of multi-drug resistant TB (MDR-TB), where strains of Mycobacterium tuberculosis fail to respond to the most common forms of antibiotic treatment.

To meet the longstanding challenge of inadequate drugs and vaccine tools, the September, 2018 political declaration [pdf] of the UN High Level Meeting on the Fight to End Tuberculosis, was a milestone.  Notably, the UN declaration committed to increase global TB research investments to US$ 2 billion annually, closing an estimated $1.3  billion annual research funding gap.  Other assessments have concluded that $2.5 billion annually is in fact needed to make up for inflation and funding shortfalls in previous years. 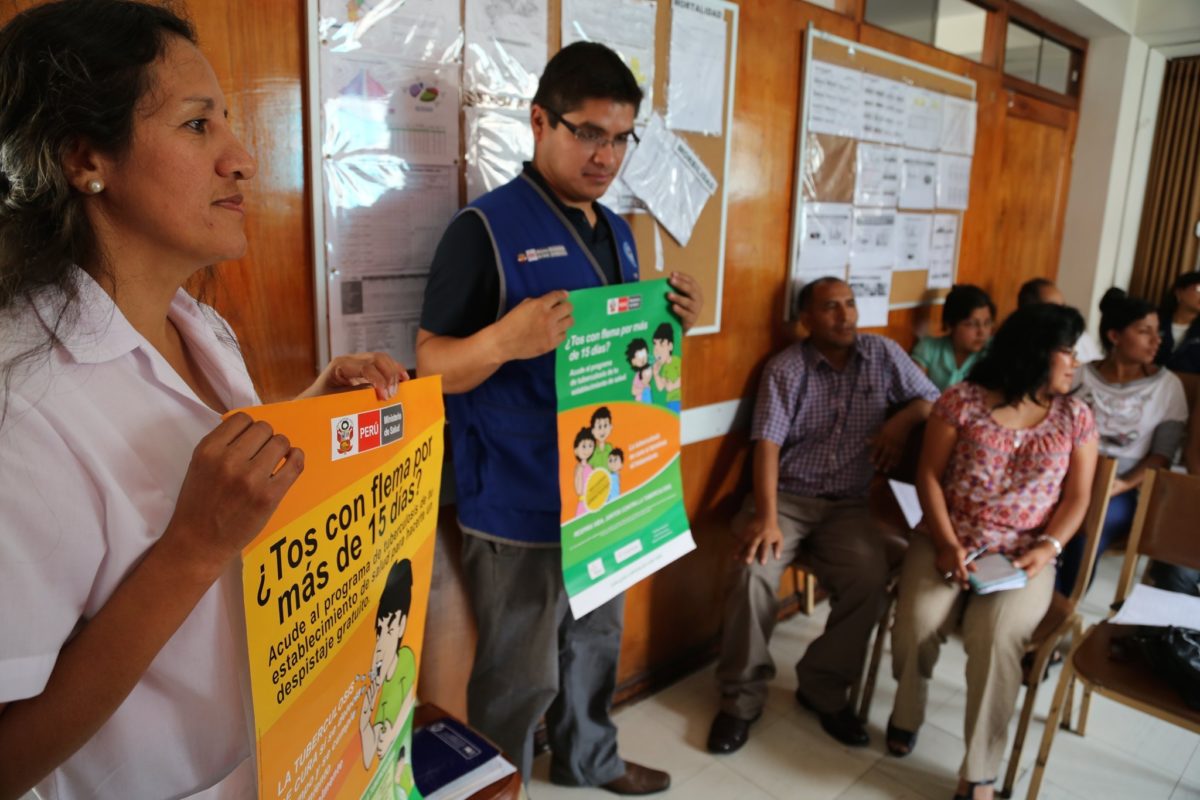 TB and TB-MDR Detection and Treatment in Lima, Peru

Funding is needed to speed up development for some of the most promising solutions, said Ezio Tavora dos Santos Filho, of REDE-TB, a Brazilian based NGO, and a member of WHO’s Civil Society Task Force on TB. As one example, Tavora referred to a new TB vaccine candidate that yielded positive results in a Phase IIb trial and, “urgently needs to be advanced into a Phase III trial.” The existing BCG vaccine for TB, the only one currently available, is often administered to infants in settings with high TB prevalence. But it is only partially effective and does not confer lifelong immunity.

Compared to the past, the TB R&D pipeline is looking better, said Estaban Burrone, head of policy at the Medicines Patent Pool (MPP). However, there remains an acute need for more affordable oral and short-term TB regimens.

Overall, the R&D landscape remains “very weak” in terms of new drugs, treatment regimens and diagnostics, asserted Viviana Munoz-Tellez, of the South Centre. Besides funding, another barrier is the lack of agreed-upon criteria for making choices about compounds and vaccine candidates to advance, she said, when such choices also involves taking calculated risks about what to move forward.

To address chronic under funding of TB strategies, Erica Lessem, deputy executive director, Programs, at TAG suggested that countries worldwide should each divert 0.1 percent of their research spending to tuberculosis. That “very realistic strategy” would close the funding gap, she said. She added that research should be guided by core principles of affordability, efficiency, and equity; end-user prices should also be “delinked” from the costs of R&D and production.

In fact, the TB research incentives landscape needs deeper reform, in particular for later-stage R&D, according to Suerie Moon, director of research at the Global Health Centre of Geneva’s Graduate Institute of International and Development Studies.

She noted that such R&D had  historically been focused in a cluster of large companies based in high-income countries, but TB research is now being carried out in dozens of middle-income countries as well. And critical TB research initiatives are increasingly led by small and medium-sized enterprises, as well as publicly-funded product development partnerships, and academic research institutions. Since TB research cannot often compete with more lucrative drugs, such as cancer treatments, in the portfolios of large pharmaceutical firms, an even greater focus on funding distributed to this broader network of actors, would be more effective, she said.

Encouraging transparency around R&D processes is also important,  Moon added. “In policy debates and in the public imagination,” R&D is a black box, with the assumption that R&D is complicated, extremely expensive, and takes forever, she said. Opening the black box would ensure that people understands how it really works, and see that it is “very feasible to do it in a different way.”

Other speakers, such as the South Centre’s Munoz-Teller, contended that patents are an insufficient driver for industry innovation when it comes to TB research. If and when patents are obtained, they can also limit access and delay competition for TB drugs, she said.

With close to 80 percent of research funding coming from a range of public or philanthropic sources, funders have considerable leverage to impose price and marketing conditions on new health products that reach regulatory approval so that they can be more accessible, MPP’s Burrone agreed. According to the 2018 Tuberculosis Research Funding report, by Stop TB and TAG, some 66 percent of global TB funding in 2017 came from public sources, 19 percent from philanthropies, 11 percent from private industry, and 4 percent from UN and other multilateral organizations.

Data sharing is another key to unlocking the potential of TB research and innovation said Brigden. Data sharing allows for wider collaboration, helps decision-makers in their choices, and is directly linked to access to products. For example, data from failed trails is very important in guiding successful design of further trials. Data also serves to accelerate registration of new tools, promote good scientific practices in a cost effective and timely manner, and facilitate meta-analyses that further synthesize data useful to the development of global guidelines as well as market access analyses, she explained.

Contrary to some preconceptions, the academic world can be even more protective of its data than industry, said Pauline Beattie, operations manager for the European & Developing Countries Clinical Trials Partnership (EDCTP), which recently forged a partnership between the European Union and sub-Saharan African countries to accelerate clinical research on poverty-related diseases such as TB. Beattie also noted that low- and middle-income countries are sometimes reluctant to share their data, if in the past such data were used by others without their consent.

WHO Global Strategy on TB R&D In Progress

In order to meet the 2030 target to end the TB epidemic, WHO is meanwhile working on the development of a Global Strategy for TB Research and Innovation.  The strategy is currently open for consultation and comments by member states, said Teresa Kasaeva, director of WHO’s Global Tuberculosis Programme.

The strategy aims at creating an enabling environment for TB innovation; increasing financial investments in TB research and innovation; ensuring equitable access to the benefits of research; and promoting and improving approaches to data sharing. The draft global strategy will be presented to the next WHO Executive Board in January 2020.

According to Munoz, the draft strategy offers a useful approach insofar as it covers the whole value chain, and it also considers a wide range of actors in the arena of diagnostics, vaccines, and treatment.

However, she said, the access to treatment safeguards in the draft strategy should be more specific, including: recommendations for clear provisions in drug development contracts ensuring broad access to medicines thus developed, as well as more open innovation, collaboration and data-sharing.

Another bright spot in the funding landscape is the recent investment of BRICS countries (Brazil, Russia, India, China and South Africa) into TB research that would yield safe and affordable drugs and diagnostics.  This includes the BRICS TB Research Network, said Tavora, an initiative to which Brazil has also made a major funding commitment. Such investments are significant insofar as BRICS countries represent some 40 percent of the global population and bear 50 percent of the TB burden, including 60 percent of multi-drug resistant TB incidence, Tavora noted.