These powerful industrial interests – ranging from cement to mining – account for one-third and one half of the country’s urban air pollution – and a large part of pollution of the country’s  lakes and streams, including the iconic Ganges.

In issuing the directive on data collection and sharing, the Green Tribunal – established 11 years ago for the expeditious legal review of appeals on environmental pollution issues –  was following up on a 2017 Supreme Court order directing all states to ensure that polluting industries instal OCEMS and make industrial emissions data publicly available.

In an assessment of state inaction and industry non-compliance,  the Indian non-profit Legal Initiative for Forest and Environment (LIFE) last year reported that of the 32 state-managed pollution control boards, one-half had not even bothered to create online continuous emission monitoring portals – as per the Supreme Court directive.

And of the 16 Indian states that had complied with the original Supreme Court judgement, only 38% allow public users to access and assess the data generated, LIFE noted.

The rest is hidden away behind passwords, something the petitioners want to unlock to force transparency.

In the recent case, the southern regional bench of the Green Tribunal, directed the states of Tamil Nadu, Karnataka, Andhra Pradesh, Kerala and the union territory of Bunchberry to comply with the Supreme Court  directive by April 9.

Air pollution leads to almost 1.7 million premature deaths a year in India, as a result of cardiovascular and respiratory diseases, lung and other cancers, strokes, pre-term birth, type-2 diabetes, and several other neurological and cognitive illnesses.

The ruling was welcomed by citizen scientists and clean air advocates, who said that making data on emission and effluents more transparent and accessible will help empower the public and drive change.

“Brilliant directive,” tweeted Ronak Sutaria, data scientist and urban policy researcher who has been following this data – or lack of it – since the Indian government started monitoring industrial emissions and effluents that flow into rivers and lakes across the country in 2014.

“Industrial pollution from notified high-polluting industries typically accounts for 30% to 50% of the total pollution experienced in most urban cities and towns,” said Sutaria, who runs urbansciences.in, a low-cost real-time air quality monitoring network. “The OCEMS systems are the last checkpoints before these pollutants escape into our environment.”

Another issue is the overall lack of OCEMS device and thus monitoring at many industrial sites. In the heavily industrialised western state of Maharashtra, for instance, in just one region,  there are nearly 23,500 high pollution potential industries. In contrast,  the total number of OCEMS installed in the entire country is only about 4,000. This is a problem of industry compliance.

Most data generated by even these is largely inaccessible to the public, added clean air expert, Chetan Bhattacharji, a board member of the advocacy group Care for Air.  “The data the OCEMS collects—inarguably vital for public health—remains opaque. It is either faulty, insufficient, complicated or difficult to access,” says Bhattacharji.

What would PM2.5 observations depicted in 3D look like?

North India is equally non-compliant. A news story in March reported that the Central Pollution Control Board (CPCB) itself cracked the whip on the 1,631 “grossly polluting industries in the Yamuna basin,”  80% of which are non-compliant, asking them to share their pollution data and connect to the CPCB server within 3 months.

These industries are supposed to share the data they generate with the pollution control boards in the states where they are located –  uploading it in 15-minute intervals.  Those boards, in turn, are supposed to create a repository under the supervision of  the CPCB – but they don’t always do so.

So while the monitoring equipment is owned by industry, the data it generates is intended to be shared with the government, at state level and nationally.

The petitioners are trying to ensure that this, by default, is also shared with the public. This, they say, should also include public access to historic data, location coordinates of air quality monitoring stations, and more. Made public, such data would flow into a central repository of OCEMS data, paid for by industry, but owned by the public via the CPCB, which oversees and reports on air pollution nationally. 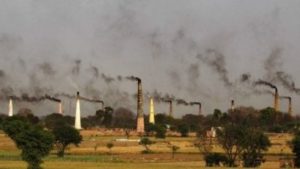 While the recent Green Tribunal ruling, issued in March, focuses on industry compliance and public accessibility of data,  what it doesn’t address is an inherent and clear conflict of interest: The commissioning and operations of the monitoring systems are left to the same industries which are themselves being monitored for their emissions. This means polluting units themselves self-monitor and upload pollution data to the pollution control boards directly.  This is akin to asking students to grade their own exam papers.

Thus, the recent ruling only goes part-way in making most effective use of the considerable data-generation potential inherent to the OCEMS systems. But even if the ruling ends up solving the problems of compliance and accessibility, that would be a good first step.

In fact, Sutaria and Bhattacharji have argued that these thousands of monitors be immediately brought under a transparent regime where the data can be analysed, verified and reported. The two sought greater air pollution data transparency in a report published by an Indian research foundation.

“Understanding of city-level air quality could be strengthened if residents who live in spaces where industries are present, are able to access information about industrial emissions in their areas,” the report by Sutaria and Bhattacharji stated.

Developed countries such as the United States and countries in the European Union make similar data freely available to the public enabling citizens to track industrial air pollution across the country. In India, this is not the case, they observe.

“Environmental groups have used such data to identify the air polluters in a region and have held them accountable, such as the Tata Steel plant in Netherlands. Overall, in the European countries, industrial pollution emissions have steadily gone down since 2007, when the datasets were first made available across the Union.”

“This data enables citizens to track industrial air pollution data across Europe, including who the top polluters are and the spatial and temporal trends of the emissions for each of those industrial locations. If 33 countries can collaborate to do this, one country, India, should easily be able do this across all its states,” adds Sutaria.

If all the OCEMS data was publicly and transparently available, it could give enough raw data to create a robust environmental monitoring ecosystem, a first step towards transparency, accountability and control. Such a system would not just empower the populations most vulnerable to health harm from industrial pollution, but also strengthen the government’s own monitoring, helping it to geolocate where industrial pollution is coming from.

Until now, however, the government’s pollution boards in fact fail to have any impact on pollution mitigation, says one researcher, Dharmesh Shah.

“Empirically speaking, the Central and state pollution control board across India have effectively, and for all practical reasons, abandoned the notion of “controlling” pollution,” he tweeted.

Empirically speaking, the Central and state pollution control board across India have effectively, and for all practical reasons, abandoned the notion of “controlling” pollution.@lifeindia2016@rsutaria @NityJayaraman @CemShwetahttps://t.co/cZYcR4yph1

If industry shared its data cleanly and ethically, that data would also fill existing gaps in ambient air pollution monitoring systems, says Bhattacharji. The breadth of health harm triggered by air pollution makes this real-time data from these OCEMS of critical importance.

In comparing sheer numbers of monitoring devices, industrial monitoring is about ten times as dense as government-controlled ambient air quality monitoring systems, he notes, saying, “By this yardstick, it is apparent that the scale of monitoring of pollutants is bigger in the country’s industrial sector.”

CAAQMS and OCEMS differ only insofar  as the first tracks ambient air quality levels, while the OCEMS track industrial  emissions at source.

Health advisories are made based on CAAQMS. Industry in most places contributes anywhere from 30%  to 50% to ambient pollution, explain experts. However, at the same time, OCEMS systems are critical to identifying the actual sources of air pollution – and then acting to limit them.

“The OCEMS network is regulated by the same regulatory body, the CPCB, and monitors similar parameters as those covered by the CAAQMS,” says Bhattacharji – arguing that the two need to be linked directly under the control of the national pollution control board.

With data as key, if such linkage was ever made, the nemesis for industry’s rampant pollution may yet be around the corner.