After donating over 6 million Covid vaccines to more than 13 countries, the Indian government suggested the creation of a regional pandemic platform for preparedness and medical emergencies with its 10 neighbouring countries.

At a meeting with health officials, Indian Prime Minister Narendra Modi proposed creating “a special visa scheme” for doctors and nurses to enable swift travel during health emergencies,coordinated air ambulances, a regional platform for “collating, compiling and studying data about the effectiveness of Covid-19 vaccines” and a network for “promoting technology-assisted epidemiology for preventing future pandemics.”

India has reported more 11 million COVID-19 cases and over 156,000 deaths. Although cases have been declining since September last year and had considerably reduced by January, there has been an increase of about 31% in the past week, mostly in the Western state of Maharashtra.

“Through our openness and determination, we have managed to achieve one of the lowest fatality rates in the world,” said Modi. “This deserves to be applauded. Today, the hopes of our region and the world are focused on rapid deployment of vaccines. In this too, we must maintain the same cooperative and collaborative spirit.”

Modi was referring to the Indian government’s “Vaccine Maitri” (meaning vaccine friendship) initiative, through which the Indian government has donated more than 6.27 million doses of COVID-19 vaccines to  more than 13 countries, including neighbours Bangladesh, Afghanistan, Bhutan, Myanmar and countries such as Oman, Barbados and El Salvador. It also commercially exported 10.5 million doses of vaccines to 8 countries. 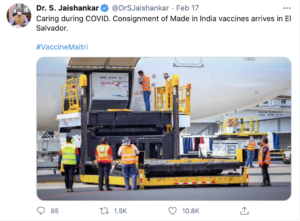 Evoking the “spirit of collaboration” among these countries, Modi said that India and these countries have a lot in common and should share their successful health policies and schemes.

“We share so many common challenges – climate change, natural disasters, poverty, illiteracy, and social and gender imbalances. But we also share the power of centuries old cultural and people-to-people linkages. If we focus on all that unites us, our region can overcome not only the present pandemic, but our other challenges too,” he said.

Variants May be Associated With Surge in COVID Cases

In the last few days, the Maharashtra state government reported a sudden burst of cases in the Vidarbha region, closer to Central India. The genome sequencing of a few cases in Amravati district showed “unique mutations” including E484Q, which is similar to a mutation (E484K) found in South African and Brazilian variants, according to a Times of India report.

Maharashtra and Kerala account for more than 74% of the cases in the country while  Chhattisgarh and Madhya Pradesh are also seeing a rise.

This is in contrast to the steady downward trend of the pandemic in India since last September last year. The country is reporting an average of 12,000 cases a day, as compared to more 90,000 cases in a day in September.

Experts have attributed the overall fall in COVID-19 positive cases over the past few months to herd immunity caused by widespread infection, especially in cities such as Mumbai, Pune, and Delhi which saw the largest outbreaks in the country.

A recent round of sero-surveillance in Delhi between January 15 to January 23 among 28,000 people found that 56% of those surveyed had antibodies against COVID-19. 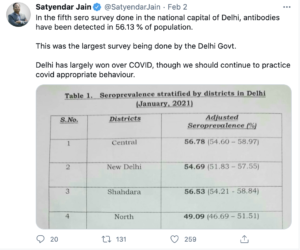 “Those infected with Covid will only protect themselves but also protect others. Half the population will not transmit to others. Besides, the susceptible population is reduced by 50%,” explained Dr Sanjay Rai, from Delhi’s All India Institute of Medical Sciences.

Citing a recently published study in the New England Journal of Medicine, Rai said that those who are infected are protected from disease for at least six months. The study which was conducted with more than 12,000 health workers in the UK, showed that presence of antibodies was associated with a substantially reduced risk of reinfection in six months.

However, a nation-wide survey showed only one out of 5 people have been exposed to the virus.

“The message is that a large proportion of the population remains vulnerable,” said Dr. Balram Bhargava, who heads Indian Council of Medical Research, that helmed the national-wide sero-survey.

Meanwhile, there is some evidence that people who have already had COVID-19 can become reinfected with variants.