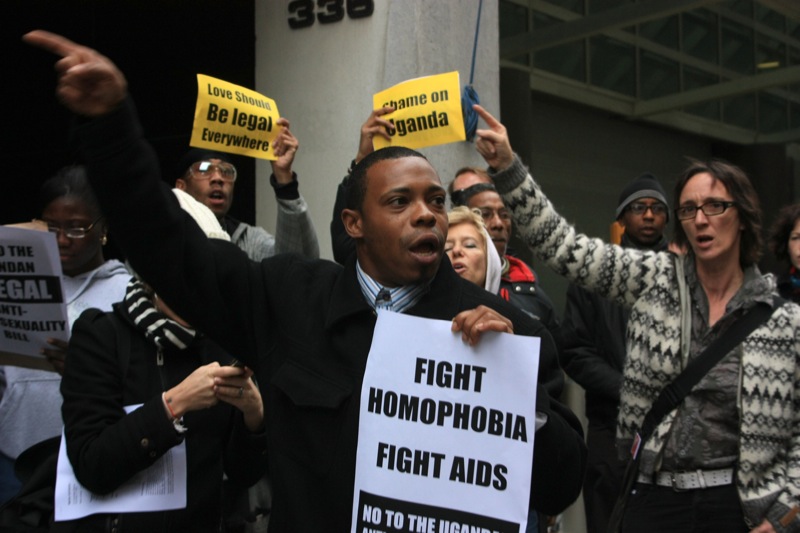 KAMPALA – A chorus of human rights organizations, joined by the United Nations, have condemned Uganda’s controversial law that criminalizes same-sex relationships, sex work and imposes mandatory HIV testing on people accused of rape – calling on the east-central African country to amend the law as it would violate human rights standards and undermine public health.

The UN High Commissioner for Human Rights, Zeid Ra’ad Al Hussein, said in a statement that Uganda’s Sexual Offences Act 2019 raises serious human rights concerns and called upon President Yoweri Museveni to adopt a “legal framework that can support victim-centered approaches in the investigations and prosecution of sexual violence, including rape, in compliance with international law and standards.”

Other human rights campaigners, including UNAIDS, described the new legislation, which was passed on 3 May, as “unjust laws” that will discriminate against vulnerable groups including LGBTQ+ people, sex workers, and those living with HIV.

In the amended bill, punishment for engaging in consensual same-sex relations has been reduced to 10 years in jail instead of life imprisonment, but UNHCR spokeman, Rupert Colville said: “The fact remains that such relations are still criminalized”.

“This, in a country where stigma, discrimination, and violence against people based on their sexual orientation and gender identity is widespread and often committed with impunity, given that victims are frequently too afraid to report any attack against them,” he said.

UNAIDS Executive Director, Winnie Byanyima said in a statement on 6 May said she was “deeply troubled” by parts of the bill as it “marginalized vulnerable groups of fellow citizens and denied them their human rights, including their right to health”.

“Targeting people living with HIV, lesbian, gay, bisexual and transgender communities and sex workers increases stigma and discrimination, said Byanyima, adding that the bill further “undermines the HIV response by preventing people from receiving the HIV treatment, prevention and care services that they so urgently need”.

President Museveni must still sign the bill before it can become law, but human rights campaigners are urging Ugandan parliamentarians to reconsider the contentious provisions.

In January this year, Museveni said that LGBTQ+ people are “deviated from the normal”.

The bill criminalizes homosexuality, bisexuality, and the transgender communities. It also criminalizes same-sex sexual relations, imposes mandatory HIV testing for sex offenders, and harsher sentences on people living with HIV than the general population accused of some similar crimes.

Adrian Jjuko, executive director of Human Rights Awareness and Promotion Forum (HRAPF),  slammed the law as unconstitutional and an “affront to basic human rights”, while Sylvia Nakasi, acting Executive Director of Uganda Network of AIDS Service Organisations (UNASO), said it was “not legally friendly” and “infringed on human rights”.

“If this bill is passed into law, it will erase many gains already attained. That said, the bill has clauses that will be hard to prove in case someone is sued. I wonder how it will be implemented,” Nakasi told Health Policy Watch.

In a statement condemning the passage of the bill, the group expressed concerns that some of its language “will enhance the already homophobic environment in Ugandan and consequently lead the way for further violation of the rights of sexual and gender minorities, including violations such as ‘corrective rape’ and other acts of violence.”

The Ugandan parliament’s adoption of the new law comes just weeks before the United Nations General Assembly High-Level meeting due to take place from 8 to 10 June 2021.

Initially described as a way to crack down on sexual violence, the bill doubles down on already-enacted laws that criminalize LGBTQ sex.

It also doesn’t recognize marital rape and provides for the death penalty for HIV-positive rape accused.

Human rights activists say the creation of different punishments for people living with HIV/AIDS is discriminatory and against public policy which promotes stigma and discrimination that PLWHIV already facing.