Madrid, Spain – Heart attacks, respiratory illnesses, and asthma attacks dropped significantly in places as diverse as the United States, China and Europe after new policies reducing air pollution were adopted, and health benefits were sometimes evident in as little as one week after the new policies took effect, according to a new study in the Annals of the American Thoracic Society.

The study Health Benefits of Air Pollution Reduction, was released to coincide with the COP25 Climate Conference in Madrid, where teenage activist Greta Thunberg arrived in Madrid on Friday, to carry her message about climate change’s looming impacts on the next generation to the thousands of delegates gathered here.

After crossing the Atlantic by a catamaran to Lisbon, Portugal, and then reaching the Spanish capital via an overnight train, Thunberg made a surprise appearance at the COP25 conference center, before joining a planned climate march in the capital this evening.

Speaking at a press conference at a Madrid cultural center on Friday afternoon, Thunberg blasted politicians for dragging their feet. “We are getting bigger and bigger, and our voices are being heard more and more, but of course that does not translate into political action,” Thunberg said. “I sincerely hope that world leaders, that the people in power, grasp the urgency of the climate crisis because right now it doesn’t seem like they are.”

The release of the new study on air pollution’s health impacts was timed to coincide with the COP25 conference, said lead author Dean Schraufnagel of the University of Illinois-Chicago, Department of Medicine, in an interview with Health Policy Watch.
He said that the study underlines the immediate gains politicians can obtain if they cut air pollution, which also reduces climate emissions.  “Air pollution and global warming are tightly linked, with common causes and interactive molecules and temperature, as we outline in the .. paper,” Schraufnagel said.
“Our message is that air pollution is an avoidable health risk and we can expect good health outcomes in short periods (during a legislator’s term in office) if we enforce pollution standards.”

While thousands of studies have demonstrated the close relationship between increased air pollution levels and a diverse range of health impacts, including more premature deaths from a range of non-communicable diseases, this study retrospectively at what actually happened – once improved policies took effect. The review looked at peer reviewed studies worldwide to compare findings on if air pollution reductions also reduced illnesses, which ones, and to what extent.

“We knew there were benefits from pollution control, but the magnitude and relatively short time duration to accomplish them were impressive,” Schraufnagel also said in a press release.  “Sweeping policies affecting a whole country can reduce all-cause mortality within weeks. Local programs, such as reducing traffic, have also promptly improved many health measures.”

While benefits of air pollution reductions have been more widely studied in the United States and Europe, studies from Asia where air pollution levels were traditionally much higher, also revealed the same set of relationships, Schraufnagel said, adding that in fact “there strong evidence that the interventions have a greater [health] impact when the pollution burden is greater.” 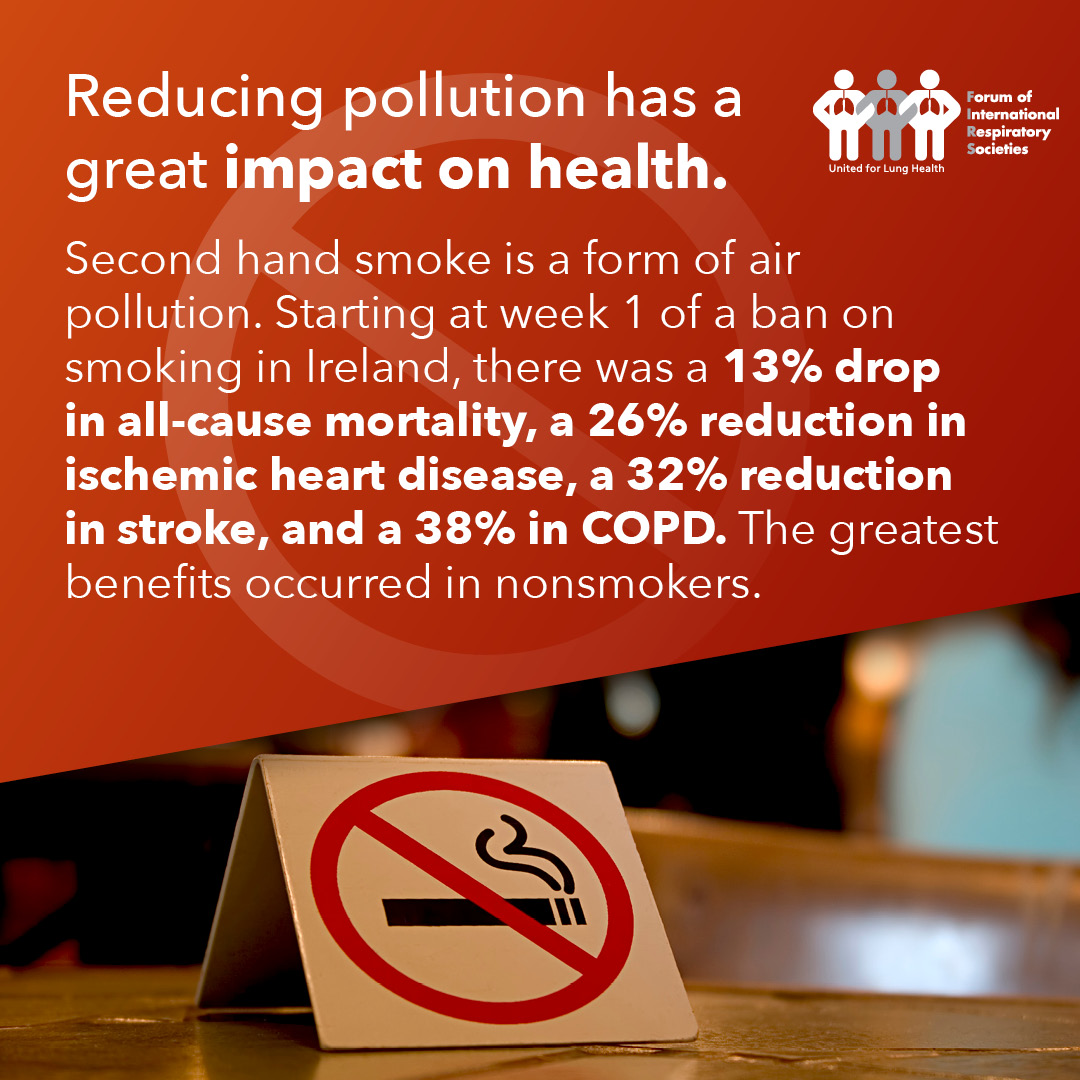 As an example of how dramatic the results can be, one study found that a nation-wide smoking ban enacted in Ireland in 2004 led to a 13 percent drop in all-cause mortality, a 26 percent reduction in ischemic heart disease, a 32 percent reduction in stroke, and a 38 percent reduction in chronic obstructive pulmonary disease (COPD) – with reductions starting in week 1 of the ban. The benefits were seen most dramatically in non-smokers and young children.

Outside of direct health benefits, the researchers also found that better air quality was associated with lower school absenteeism, and clean air policies have economic benefits. For example, the review cites one study that estimated the Clean Air Act of 1970 has saved United States US$ 2 trillion since it was first enacted. In another case, the 13-month closure of a steel mill in Utah was associated with a 40 percent drop in school absenteeism in the surround city.

Although the review cites some studies from China and Nigeria, data is lacking for many rapidly developing countries, where air pollution is becoming a more visible health problem. Just last month, a “public health emergency” was declared in Delhi, India, shutting down schools and workplaces for several days, as levels of dangerous small PM10 and PM2.5 particles soared to record-breaking heights.

“it is important for countries to do their own research of the health effects of stopping a point source of pollution… They could stimulate the public and research community,” Schraufnagel told Health Policy Watch.

“For example, Indian studies could have a powerful effect on policy in India… The studies would also take into account variations within countries; for example, if Delhi’s pollution mainly resulted from burning trash rather than automobiles, it would be most fruitful to stop the trash burning rather than ban cars,” he said.

The World Health Organization estimates that  7 million deaths annually are directly attributable to outdoor and ambient air pollution. Following the WHO air quality guidelines, the study authors say, could lead to “prompt and substantial health gains.”

“Air pollution is an avoidable health risk,” said Schraufnager. He added that “good health outcomes” could be seen even within a politician’s term in office if pollution standards are enforced and WHO air quality guidelines are followed.

This story was published as part of Covering Climate Now, a global collaboration of more than 250 news outlets to strengthen coverage of the climate story.