In a suspense-filled finale that carried trappings of an elegant auction cum-political celebrity show, The Global Fund to Fight HIV/AIDS, Tuberculosis and Malaria brushed tantalizingly close to its $US 14 billion funding target – rallying some US$13.92 billion in commitments at its Sixth Replenishment Conference,in Lyon, France.

Speculation about whether the goal for the next 3-year funding cycle would in fact be met continued right up until the end of the pledging session, after a late afternoon tally showed that the collective pledges of the  government, private sector and civil society actors gathered for the event totaled $13.8 billion.

With the prize in sight, French President and conference host Emmanuel Macron touched the finish line and declared victory. Macron added another €60 million of French funds into the pot in the closing minutes of the conference – followed by an additional €60 million contribution from the Bill and Melinda Gates Foundation (BMGF). The French president  declared that he would raise the final $US 80-100 million within the next weeks.

“So, we are at $US 13.92 billion. I can say that we will reasonably reach the $US 14 billion in the coming weeks, so we will be there,” said the French president, standing alongside philanthropist Bill Gates and Global Fund Executive Director Peter Sands at the closing session.

“It’s a fantastic result that everyone in the world should feel extraordinarily proud of, and tomorrow we will look at how to make the best use of these resources in a way that will end these epidemics and transform the world,” said Sands. A former banker, Sands was widely acknowledged for his behind-the-scenes work recruiting contributions from governments and the private sector, but he spared only a few words on the stage during the conference’s day-long high-level meeting.

The two-day conference capped months of lobbying, of donors large and small, rich and less so. In fact, a large number of African countries made first-ever pledges to the Global Fund’s activities – the world’s largest channel of aid to health systems to tackle the world’s three biggest infectious diseases.

A lineup of developed country donors increased their pledges for 2020-2022 by 15% over the previous three-year cycle – in response to repeated calls from Macron and the Global Fund leadership.

A Meeting with History

Macron set the tone in his opening presentation Thursday morning, in which he appeared on stage with Amanda Dushime, an adolescent HIV/AIDs survivor from Burundi, to tell his fellow heads of state and ministers that had gathered for the event that they had a “meeting with history.”

“The actions of the Global Fund have achieved what was thought to be impossible,” Macron said, recalling how the way in which the HIV/AIDS epidemic was rampaging through Africa and malaria claiming the lives of millions of children annually at the time the Fund was created in 2002.

Today, deaths from malaria have plummeted by 60% over the past 20 years.  New HIV infections have declined by one half since 2005, and some 30 million lives have been saved, he said, citing data from a recent Global Fund review of its activities.

“The end of HIV/AIDS, TB and malaria is possible in our generation,” Macron declared.  “Twenty years ago, these number were thought of as being impossible.  It happened because the Global Fund worked with the governments, with the NGOs, with the stakeholders, to show by example what the international community can do when we have the will.”

However, he warned that the gains that have been made could also be erased if the push against the three killer diseases does not continue. “The next three years will determine if we win or not,” asserted Macron.

“I talked about 30 million lives saved. But there are regions and zones where the battle is not over; new HIV infections are resurging in 50 countries, including in Africa and the Americas.  Resistance to malaria medications and insecticides is gaining territory. So today, the situation is critical. If we don’t win the battle, we can lose everything that we have gained.  If we uphold our commitments there are 16 million lives that can be saved in the next 3 years. … We have a meeting with history and with our responsibilities.”

In the pledging conference dubbed “#StepUpTheFight”, Macron unabashedly challenged countries ranging from Japan to Australia and Norway to increase their pledges by 15% or more over the previous three-year cycle. And he invited oil-rich Gulf countries such as the Emirates, Qatar and Saudi Arabia to “join the club of donors” with new or bigger contributions than before.

“Multilateralism is still standing tall,” Macron told the crowd. “In the 3 hours that come, we have to get to the 14 million. Have you understood, the pressure is going to be maximal.”

Ultimately, most countries responded – inspired, led or dragged by France. As the Global Fund’s second largest donor, the French pledge ultimately topped US $2.1 billion, for a 20% increase over the past funding cycle.

US Global Ambassador for HIV/AIDs, Deborah Birx also announced an imposing $US 4.68 billion commitment, a 15% increase over the past three years. She said that it reflected the “compassion of the American people that transcended political parties,’’ for a mission that had earned the “unwavering support of three US administrations.” The US has historically been the Fund’s largest donor, contributing some $104 billion in total since its creation in 2002.

It was Macron, however, not US President Donald Trump, who won the biggest rounds of political acclaim on the funding stage as the champion of compassion – and of multilateralism.

“Every time I listen to him, my energy and idealism has been renewed, he has been a perfect host, and everyone has stepped up,” said Gates, heaping praise on the French Prime Minister while announcing a BMFG commitment of US $700 million midway through the day.  “Although we don’t know the exact total yet, it is clear we have been able to do far more than we were able to do three years ago. This is particularly significant when we see countries turning inwards. But here we see that to solve the toughest problems, whether it is diseases, climate change or terrorism, we really have to work together.”

Rock star Bono [Paul David Hewson] was even more blunt in his remarks:  “If you want to know what leadership is, it looks like Emmanuel Macron. He’s fighting for our humanity,” said the U2 lead singer who also heads (RED) a foundation that recruits private sector support to the Global Fund through product sales.

As the ultimate count of total donations got underway behind the scenes in the waning afternoon hours, Bono reflected on the wider meaning of the replenishment event.

“Although we only need to count to 14, remember these are not just numbers, these are people.  This is saying, where you live cannot decide whether you live. We are putting down a marker for the populists, the cynics and the nativists who breed dispute and division. You demonize the other, we enlarge the concept of neighbourhood,” Bono said.

“We have made great advances but there are still 14 million HIV carriers who cannot get access to ARVs.  For 14 million people who can’t get the medication it’s still San Francisco in 1985, it’s Johannesburg in 2000.  14 million lives are in our hearts.  [US$] 14 billion is what we have in our minds.”

A number of leading foundations also joined the Global Fund drive for the first time, including – the Rockefeller Foundation (US$ 15 million) and the Children’s Investment Fund Foundation (US$ 25 million).

Also receiving praise from the stage Thursday were the countries in Europe and elsewhere in the developed that announced increases of 15% or more over the previous funding cycle – including Canada, Italy, The United Kingdom, The United States, Germany, Portugal, the European Union, Ireland, and New Zealand.

Japan increased its pledge by 5%, making it the only G7 country that did not increase its commitment by at least 15%.

Some donors also upped their commitments in the morning round of announcements; Norway doubled their planned increase, from 2.02 billion NOK to 2.04 billion “after the president [Macron’s great speech],” according to the Norwegian envoy, Axel Jacobsen, of the Minister of Foreign Affairs.

Jacobsen noted that moving forward “it will be important to continue to foster synergies” between the Global Fund and some eleven other global health organizations, referring to a new Global Action Plan that is supposed to improve coordination, which was initiated by Ghana, Germany and Norway and recently launched on the margins of the 74th United Nations General Assembly.

“If we are to reach our goal of Universal Health Coverage, the Global Fund is essential and the Global Fund remains a pillar in Norwegian development efforts. We are the largest per capita contributor,” he said. 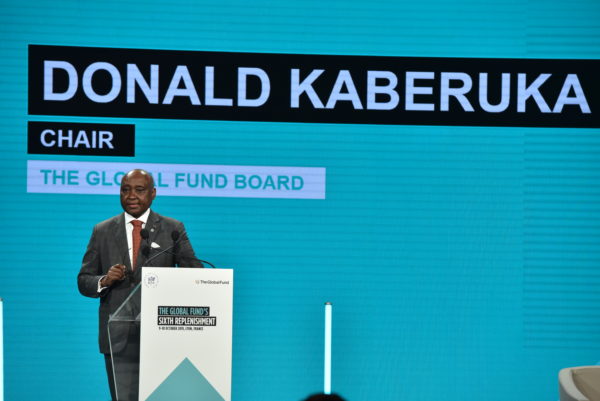 Indeed, the next three years will test the organization’s commitment to use funds more efficiently and to support the development not only of better disease control programmes but of more sustainable health systems in low- and- middle income countries, leading speakers asserted.

“It is time to go beyond speeches,” said Donald Kaberuka, Global Fund Chairman of the Board. “We have to do things differently and we have to do things with countries in the leadership role.. it is time to change the gears. We have promised value for money.  Our board leadership is aligned on this. We are trying to get countries to do a bit more. Our countries have to commit to better policies, inclusion and more money for health systems.

“Money alone doesn’t solve the problem. It is money plus policies,” he said.

WHO Director General Tedros Adhanom Ghebreyesus, himself a former chairman of the Global Fund Board, also called on the Global Fund leadership to use its newfound resources to support stronger health systems development and greater collaboration between agencies.

“In each of the three experiences that I have had, I have seen the impact…The essence of the Global Fund is partnership. We succeed or fail together …we still have a lot of work to do,” said Dr Tedros.

“We have to continue to strive for universal health coverage. We have pledged to work more collectively with countries at the centre,” he added.

“This is why the replenishment of the Global Fund is so important. It is an investment in our shared vision of a healthier, safer and fairer world. We have come far, but  we have not achieved our goal; every death is one too many. Now is not the time to lose focus. Now is the time to achieve our ends together.”