The global anti-abortion movement will get a boost if the US supreme court dismantles the 1973 landmark court case, Roe v Wade, that legalised abortion – but bans are ineffective in stopping abortions, succeeding only in making them unsafer.

“Any regression in protection of the right to abortion would not only stand to damage the global perception of the United States; it would also set a terrible example that other governments and anti-rights groups could seize upon around the world in a bid to deny the rights of women, girls and other people who can become pregnant,” said Agnès Callamard, Amnesty International’s Secretary-General.

Callamard added that even predominantly Catholic countries like Argentina, Ireland, Mexico and Colombia had decriminalised and legalised abortion, but there “are grim signs that the US is out of step with the progress that the rest of the world is making in protecting sexual and reproductive rights”.

"Criminalizing abortion does not make abortion disappear, it just drives it underground" —Ipas President and CEO @AnuKumarIpas speaking to @TrevorLAult at @ABCNewsLive. https://t.co/NwR5UIt7w9

However, Catholic Poland restricted access to abortion in 2020. And if Roe v Wade is overturned, US women and girls in states that do restrict abortion will be in a similar position as women in most countries in Africa, the Middle East, Latin America and South-East Asia. 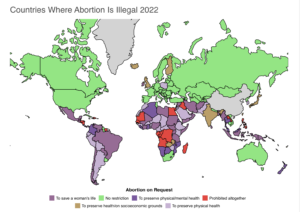 Nearly half of all pregnancies, totalling 121 million each year, are unintended, according to the State of World Population 2022 report, released last month by UNFPA, the United Nations sexual and reproductive health agency.

Over 60% of unintended pregnancies end in abortion and an estimated 45% of all abortions are unsafe, accounting for five to 13% of all maternal deaths recorded, according to the report.

Yet attempts to ease restrictions on abortion – even when a pregnancy threatens the health of a woman or girl or it was the result of rape – face fierce opposition in poorer countries, often with the support of the same US rightwing Christian evangelical and Catholic groups that have mobilised against Roe v Wade.

These anti-abortion organisations are also often against contraception, comprehensive sexuality education for children and LGBTQ rights.

Malawi in sub-Saharan Africa, is an example. It has a high maternal mortality rate, and an estimated 6-18% of these deaths are the result of unsafe abortions. But when Members of Parliament tried to introduce a Bill to expand access to abortion in 2020, US-based Catholics sponsored campaigns to stop this.

US global funding under threat?

The US is a major global funder of sexual and reproductive health (SRH) services – but the Helms Amendment has prohibited any US foreign aid for abortion since 1973.

But US support for SRH tends to yoyo widely, depending on which party is in power.

In 1984, Republican US President Ronald Reagan introduced what has become known as the global gag rule, which outlawed US funding to any non-governmental organisations that provide abortions, information, counselling, referrals or advocacy.

While every US Democratic Administration has rescinded the gag law when coming into power, the huge policy swings have badly affected sexual and reproductive services in countries that are dependent on foreign aid as they are unable to maintain consistent services.

The anti-abortion movement was massively boosted during the Trump Administration, with key posts going to officials that opposed abortion – and this momentum also propelled the Trump appointment of anti-abortion supreme court judges who are due to strike down Roe v Wade.

The Trump administration’s anti-abortion stance was a point of commonality with Russian arch-conservatives.

In October 2020, two weeks before the US election where it was ousted, the Trump Administration mobilised 34 of the world’s most conservative countries to support the Geneva Consensus Declaration.This declares that “there is no international right to abortion, nor any international obligation on the part of states to finance or facilitate abortion”.

While Trump’s defeat has taken the wind out of the Declaration, it has provided a rallying platform for anti-abortion countries – supported by a host of conservative largely US-based Christian organisations.

The arch-conservative Catholic organisation, Ordo Iuris, based in Poland appears to have taken over co-ordinating the Declaration and activities seem to have dried up since Russia’s war in Ukraine.

However, the removal of abortion rights in one of the biggest democracies in the world is already galvanising right-wing groups opposed to abortion who are poised to enjoy their biggest victory in decades.