A new plan to improve collaboration across 12 United Nations and multilateral agencies to support UN member states to reach 2030 targets on health includes not only the ambitious aim of reducing bureaucracy and increasing efficiency, but of working better across sectors to address environmental, commercial and social factors that harm health.

These factors, which lead to serious health risks such as air pollution exposure and unhealthy foods, as well as health inequalities such as gender discrimination, pose a formidable barrier to reaching many targets of the 2030 Sustainable Development Goals (SDGs). The new plan, rooted in national strategies and leadership, aims to address these complex challenges and accelerate progress on SDGs.

The Global Action Plan for Healthy Lives and Well-being for All, or GAP, “is the key vehicle for greater collaboration, and a good example of how countries and agencies can work together to accelerate progress,” a representative of Norway said yesterday at a side event of the UN High Level Political Forum on Sustainable Development.

“Not surprisingly, some of the biggest gaps are in the targets that need action across sectors,” she said, “and that is why we are here together.” 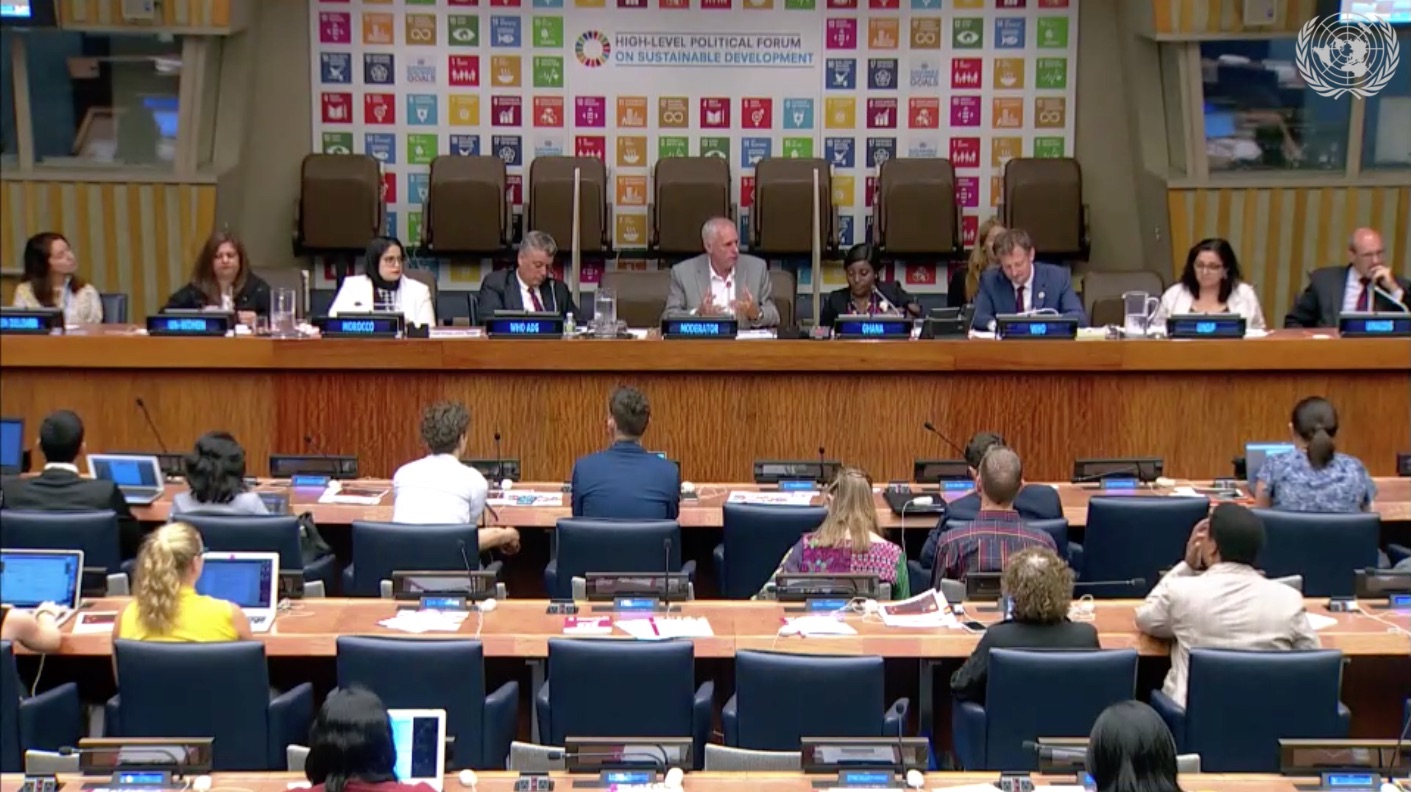 Led by the World Health Organization, and spearheaded by the governments of Ghana, Germany and Norway, GAP aims to accelerate progress to reach SDGs by 2030, in what has been dubbed the “decade of delivery,” to make up for the shortfall on progress since the SDGs were launched in 2015.

The plan, which is flexibly structured to respond to country demand and to build on existing interagency collaboration, identifies seven cross-cutting areas where collective action has a high potential to accelerate country progress on the health-related SDGs.

Developing this plan involved an extensive consultation process with member states, including discussions at the World Health Assembly in May along with country dialogues, as well as a public consultation process during which other stakeholders were invited to provide feedback on the draft plan.

The Global Action Plan will be launched this September in New York as part of the UN General Assembly’s High-Level Week, during which the UN High-Level Meeting on Universal Health Coverage will also take place.

“Health is a broader concept than healthcare,” one of the coordinators of the GAP process said at the side event. It includes environmental, commercial and social “determinants,” which are those factors that, in turn, can lead to specific health risks and disease threats.

A number of the panelists also cited that 7 million people die each year from air pollution, which one noted is equivalent to the entire population of Switzerland dying each year.

Mandeep Dhaliwal, Director of UNDP’s HIV, Health and Development Group highlighted at the event that throughout the GAP consultation process, there has been a lot of feedback on accelerator 4, “Determinants of health.”

One of the major complications of this accelerator in particular are the competing policies which play out at the national level and limit progress on health-related SDGs.

Dhaliwal asserted that GAP will help member states to deal with these “unhealthy contradictions,” which include: committing to health and wellbeing while providing fossil fuel subsidies; promoting gender equality while criminalizing LGBT communities; committing to health and wellbeing while not creating awareness of healthy diets and prevention of noncommunicable diseases (NCDs).

Taking a multi-sectoral and multi-stakeholder approach has proved successful in the AIDS response, particularly in addressing the broad social determinants of infection and transmission, Simon Bland of UNAIDS noted at the event. But such collaboration doesn’t come easy, he said; it requires “the leadership, incentives, and demands that force determination.”

Dhaliwal noted that such determination has already been put in writing in a number of high level declarations including the Rio Declaration on Environment and Development, the recent political declarations on HIV/AIDS, tuberculosis, and NCDs, as well as in the draft declaration on universal health coverage, to be issued this September.

Effectively addressing these determinants will require multi-stakeholder and multi-sectoral responses, but also inclusion, which she clarified as meaning “women and men in all their diversity.”

Addressing determinants of health, such as gender equality, has the potential to advance multiple other SDGs, a representative from UN Women said, stressing that achieving gender equality requires strengthening comprehensive healthcare, which includes sexual and reproductive health and rights (SRHR). “By 2030 and beyond, we want to see more women and girls with greater control of their bodies.”

The representative of Women Deliver clarified that addressing determinants of health is not a new agenda, noting that “these issues have been longstanding and under-addressed because they are sticky.” She then strongly advocated for a gender lens for health to be included throughout the entire action plan, which she said should include gender budgeting and auditing, health data collection disaggregated by gender, and research and development (R&D) of health products to meet the needs of girls and women throughout the life course.

“In order to make progress, we need to address the intersectionality of all the SDGs – that is why we can only succeed if we work together,” Norway’s representative said.

GAP Designed to Improve Efficiency, Not to Develop New Policies

Concerns were raised by member states during the side event regarding the accountability of the Global Action Plan, and whether or not it has a role in developing new policies.

A representative of the United States clarified that it is important to recognise that GAP is not a member state-negotiated document, and that the plan is not the outcome of member state consensus. The representative noted that the US does not agree with particular aspects of the plan, which include references to sexual and reproductive health and rights (SRHR) and drug decriminalisation.

A representative of Russia echoed the US concern that the plan does not represent member state consensus, but did not clarify the aspects of the plan with which Russia disagrees. The representative also raised concern regarding the accountability of GAP, in particular to the governing boards of its agencies and to member states, as well as whether or not GAP will play a role in determining policies.

A WHO representative involved in process of developing the Global Action Plan responded to these concerns. He clarified that there is broad agreement that this is not a policy-creating mechanism, but that it is designed to help countries implement already agreed-on policies at the country level.

“There’s a wide recognition that each of the agencies have their strategies which have been adopted by their respective governing boards… and the Global Action Plan is not meant to supersede, but to spell out how collaboration in implementing these strategies will happen, to really enhance the impact of working jointly,” which he said “is very much in line with the efforts of UN reform, to provide coherent support for member states in driving the SDG agenda.”

The WHO representative also took note of the US request for more positive references to the private sector in the GAP document.

A representative from Morocco, one of the countries actively embracing the Global Action Plan, underlined that the plan will help to prevent “doubling work.” There are many UN agencies represented in Rabat, she said, and the government had to work with each agency bilaterally; but now, “this platform will prevent extra work and achieve efficiency.”

The political declaration on UHC is now being negotiated, she said, stressing that what comes after the declaration is the most important step. “Implementation is always hard,” she said, and “GAP will help with implementation at the national level.”