Nearly 200 health organizations and more than 1,400 health professionals have signed  a letter published on Wednesday calling on governments to negotiate a legally binding international treaty that would phase out fossil fuels, which they blame for “severe threats to human and planetary health.”

Among the treaty’s supporters is the World Health Organization (WHO), a significant step and an indicator of how urgent the climate question has become.

“The modern addiction to fossil fuels is not just an act of environmental vandalism. From the health perspective, it is an act of self-sabotage”, said Dr Tedros Adhanom Ghebreyesus, Director-General of the World Health Organization.

Initiated by the Global Climate and Health Alliance and Physicians for Social Responsibility, the treaty would be modelled on the WHO’s Framework Convention on Tobacco Control (FCTC), the first global public health treaty. It took effect in 2005 in response to decades of concern over the increasing death toll from tobacco use.

“The proposed Fossil Fuel Nonproliferation Treaty would be an evidence-based international agreement to control a category of substances well-known to be harmful to human health”, the group stated.

That the term “nonproliferation” is more often used in connection with nuclear weapons is no accident. To the treaty’s supporters, the threat of nuclear war is no more existential than that of climate catastrophe.

“The two overriding issues of our era — the climate crisis and the danger of nuclear war — are deeply intertwined,” said Dr Ira Helfand, a 1985 Nobel Peace Prize winner and immediate past president of the International Physicians for the Prevention of Nuclear War.

“The climate crisis is leading to greater international conflict and a growing risk of nuclear war, and nuclear war will cause catastrophic abrupt climate disruption. The world must come together to prevent both of these existential threats.”

But in the way of emulating the success of the FCTC — and to a lesser degree the 1970 Nuclear Nonproliferation Treaty, a cornerstone of global nonproliferation — stands a significant obstacle: climate transition funding.

“Clean energy alternatives to burning fossil fuels exist, but many countries do not have the means and technical expertise to make the transition,” said Jeni Miller, executive director of the Global Climate and Health Alliance.

“High-income countries have benefited from the last hundred plus years of fossil fuel use,” Miller said. “These countries have the resources and moral responsibility not only to make the clean energy transition, but to support developing countries to do the same.”

The current roadmap for low- and middle-income countries to move straight to green energy depends on substantial investment from development banks, rich countries, and the private sector that is falling short.

Rich countries failed to close a $10 billion climate finance shortfall ahead of the last round of UN climate talks and failed to mobilize $100 billion a year in promised climate aid by 2020 to help low- and middle-income countries deal with global warming and transition to cleaner-burning energy sources.

Most of the world’s biggest greenhouse gas emitters have also yet to meet pledges to strengthen the emissions-cutting targets that they made at the COP26, the UN climate talks in Glasgow, Scotland last year.

This schism is further exacerbated by Russia’s war in Ukraine, which in Europe has prompted a race to import as much natural gas from Africa as possible but no additional funding for projects that would allow the world’s poorest continent to burn more gas at home.

This comes despite recent IEA findings that estimated the exploitation of all proven natural gas reserves in Africa would amount to an increase of just 0.5% in Africa’s global emissions burden, to 3.5% up from 3.0%. 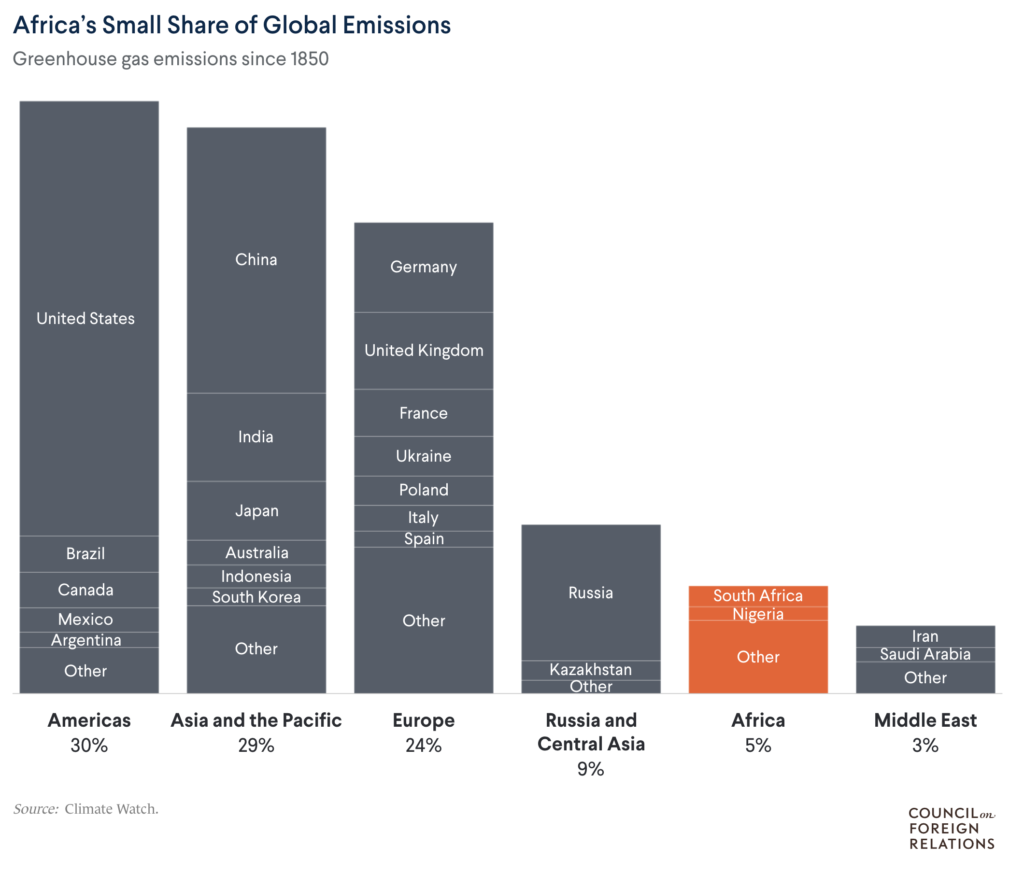 “The whole of the West developed on the back of fossil fuels — even as we speak, some Western nations are deciding to bring coal back into their energy mix because of the war. So when the world wants to transition to zero carbon emissions, who has to do more?” Matthew Opoku Prempeh, energy minister for Ghana, told Bloomberg in July. “Is the West saying Africa should remain undeveloped?”

While low- and middle-income country leaders are keenly aware of the threats posed by climate change, the question of how to balance emissions targets with lifting people out of poverty has no easy solution.

“For Africa, the problem of energy poverty is as important as our climate ambitions,” Nigerian Vice-President Yemi Osinbajo said in a video address announcing his country’s aim to raise an initial US$10 billion in funding to implement its energy transition plan ahead of the next round of UN climate talks, known as COP27, slated for November in Egypt.

“Energy use is crucial for almost every conceivable aspect of development — wealth, health, nutrition, water, infrastructure, education and life expectancy,” he said.

When African leaders from 21 countries gathered in Gabon for Africa Climate Week earlier this month to set a united agenda ahead of COP27, to be held in Egypt in November, the focus was clear: this COP is not about bold new sets of commitments. It is about achieving implementation of what’s already been committed.

In her opening address, the Commonwealth of Nations Secretary-General, Patricia Scotland, emphasized the importance of COP27.

“We are at code red for humanity, and the window for action is rapidly closing,” she said. “Tackling climate change will require the most significant political, social, and economic effort that the world has ever seen. It is up to us to set the tone and shape the quality of that effort.”

Kevin Chika Urama, chief economist at the African Development Bank, told Reuters this week that Africa faces a climate financing gap of about US$108 billion each year.

For scale, the World Economic Forum estimates India’s transition to net-zero emissions will require $10 trillion in investment. It’s a staggering figure, but the anticipated payoff is even bigger.

Stanford University researchers said in a 2019 report that a global transition to 100% renewable energy sources would cost countries US$73 trillion upfront, but it would pay for itself in less than seven years and create 28.6 million more jobs.

Ruth Etzel, co-chair of the International Pediatric Association’s environmental health group, described the consequences of inaction in no uncertain terms.

“Our message to government leaders is this,” said Etzel. ”The health of everyone alive today, and of future generations, depends on phasing out fossil fuels rapidly, justly, and completely.”