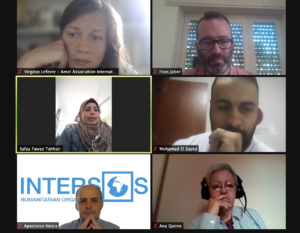 Overcrowding in refugee camps, mistrust of authorities including vaccination registration processes, and lack of access to vaccines are some of the most pressing problems preventing migrants, refugees and other “uprooted people” from getting COVID-19 vaccines.

A diverse, but also common set of issues are faced in refugee camps, informal settlements that house an estimated 79.5 million people living around, or fleeing the world’s conflict zones in Asia, the Middle East, Europe, and Latin America, panelists said at a Geneva Global Health Hub (G2H2) panel on Tuesday.  Among those, only about 26 million are officially registered as refugees according to UNHCR, The UN Refugee Agency.

Local and regional conflicts, such as the recent flareup of violence in Israeli-occupied East Jerusalem, further impede an already halting supplies of vaccines to Palestinians in the Israeli-occupied West Bank and Hamas-controlled Gaza, the latter now locked in a bloody battle with Israel, said Firas Jaber of the Palestinian social and economic policies monitor, Al-Marsad.

“Today in the uprising against the settlers in Jerusalem, and the rest of the West Bank and Gaza, the situation is now a triple crisis: the occupation, COVID-19, and also the inability of providing the vaccination to our people,” said Jaber.  Power outages in health facilities, damaged or depleted hospitals, and an overall lack of health personnel also are contributing to low Palestinian vaccination rates, Jaber contended.

In neighboring Lebanon, there is a high level of misinformation about vaccines among refugee communities, says Safaa Fawaz Tahhan, a Syrian refugee who works as an health outreach officer. It is difficult for people to register for vaccines on the Lebanese online platform, and vaccination centres are far away from refugee centres.

Meanwhile, in Latin America, political instability in neighbouring Nicaragua had led to tensions and added health challenges for Costa Rica, which saw the exodus of Nicaraguans seeking to avoid both violence and the pandemic as a threat, observed Ana Quiroz,  director of the Center For Information and Advisory Services In Health (CISAS) in Costa Rica.

“On the other hand in Nicaragua, the government preferred to deny the existence of the pandemic and instead, to call for political rallies with no preventive measures to prevent spread of the virus.”

This has caused conflict between Costa Rica and Nicaragua, with around 15,000 Nicaraguan refugees being denied access to Costa Rica, as a result of tighter border restrictions, designed to keep the virus at bay.

“This situation has led to an increase in xenophobia towards Nicaraguan people in particular, and poor people,” she added.

In Europe’s refugee camps, COVID prevention measures are impossible to maintain, asserted Apostolos Veizis from Intersos in Greece, where many refugees from Africa and the Middle East, attempting to enter the European Union, have been stranded in camps since 2016.

“The refugee camps in Greece are synonymous with overcrowding,” said Veizis. “During the COVID pandemic, we talk about keeping distance. This is a joke because there are 30 people in a tent. In less than two square metres, you find five to six people. When you are asking people to keep distance, that is not possible.

“You ask people to wash their hands, it is again not possible. So in reality, we are talking about measures that cannot be implemented, and people on the move are the ones to be punished.”

To make matters worse, since 17 March 2020, the camps have been under curfew from 7pm to 7am, making refugees even more vulnerable to COVID-19, he said.

“Our data shows that people living in the camps are three times more exposed to COVID-19 than the local population. When it comes to vaccinations, Greece is happy to present saying that one in four Greeks have had the first dose – about four million people – but that’s not the case and situation for asylum seekers and refugees,” said Veizis.

Vaccine registration has started, but there is a high level of mistrust of authorities, he added.

For Veizis, addressing the needs of refugees is largely a matter of “political will”; presently there are only 100,000 refugees arriving in the European Union each year, which is not a large number.

However, the pandemic is being used to put people in detention facilities when it would be better, health-wise and socially, for refugees to be integrated into the societies where they are now living, he said.