A side event yesterday on the margins of the World Health Assembly launched two new digital health initiatives, while a panel of speakers from government, industry and civil society described how the digital health revolution can help achieve universal health coverage.

PATH, a global health non-profit, announced the launch of a new Center of Digital and Data Excellence to promote the integration of digital technologies and data best practices across PATH’s programs, which are focused on introducing new technologies for vaccines, drugs, diagnostics, health systems and services in low- and middle-income countries.

“Through the Center of Digital and Data Excellence, we will build stronger ties between digital and data to provide immediate, powerful ways to increase the cost-efficiency and quality of health services—while simultaneously [addressing] long-standing inequities in health care,” said Steve Davis, CEO of PATH, in a press release.

Meanwhile, Novartis Foundation, also announced that it would co-chair with Microsoft a new Broadband Commission Working Group on Digital and Artificial Intelligence (AI) in Health to deliver recommendations for how AI can drive improvements in health systems accuracy, productivity and workflow.

Speakers at the side event, co-organised by the Geneva-based Graduate Institute of International and Development Studies and the Novartis Foundation along with PATH, agreed that digital health can unlock significant potential, but health sector investment in training and change management is required to allow digital health to flourish.

Digital health will change the health ecosystem, said Bernardo Mariano Júnior of the World Health Organization. He underlined the importance of making sure that change will preserve the quality of health services, and at the same time ensure that digital health serves the principle of ‘health for all’.

The digital revolution is already happening, enabling scale-up of preventive measures and early detection, which can also lower treatment costs; however, a ‘revolution’ is required in education to really harness its health potential, said Patrick Ndimubanzi, Minister of State in charge of Primary Health Care in Rwanda.

Yet another speaker bemoaned the slow uptake of digital technologies. Terrence Deyalsingh, Minister of Health of Trinidad & Tobago regretted that “nothing is happening” in digital health in his country. With only 1.3 million residents, Trinidad & Tobago is plagued by noncommunicable diseases (NCDs), including diabetes and hypertension, he said, due to a combination of genetic and cultural factors, including diets. At the same time he foresaw how artificial intelligence (AI) could change the mode of health delivery and help with preventing NCDs. For example, it could help with treatment of non-compliant patients, guide doctors, and allow remote health advice by doctors to patients through smartphones, he explained.

Of the two main challenges inherent to digital health – technological and sociological – changing mindsets is the hardest, said John Sargent, co-founder and co-CEO of BroadReach, a South African-based healthcare consultancy. It is important to keep in mind the fact that technology and digital health are a means to an end, not the end itself, he underlined, adding that the transition to digital health will require all pieces of the ecosystem to adapt.

International Telecommunications Union (ITU) Deputy Secretary-General Malcom Johnson highlighted the increased collaboration between ITU and the World Health Organization around digital health technologies, noting that the ITU had recently established a focus group on artificial intelligence for health. However, he said, artificial intelligence is only as good as the data it receives. Issues such as the lack of inter-connectivity between databases have to be addressed. And finally, half of the world’s population still has no access to internet, he said.

Benoit Kalasa, director of the Technical Division at the United Nations Population Fund (UNFPA) called on governments to extend more support to the digital transformation, while saying that his agency is also exploring how digital health can improve health system performance and support more informed treatment decisions.

Katie Dain, CEO of the NCD Alliance said that digital technologies should focus urgently on prevention and health promotion, as well as improving communications with patients and the community at large so that they are more aware and empowered to take decisions about their health. Johanna Ralston, CEO of the World Obesity Foundation also warned about the digital marketing of harmful food to children, a leading factor of obesity. 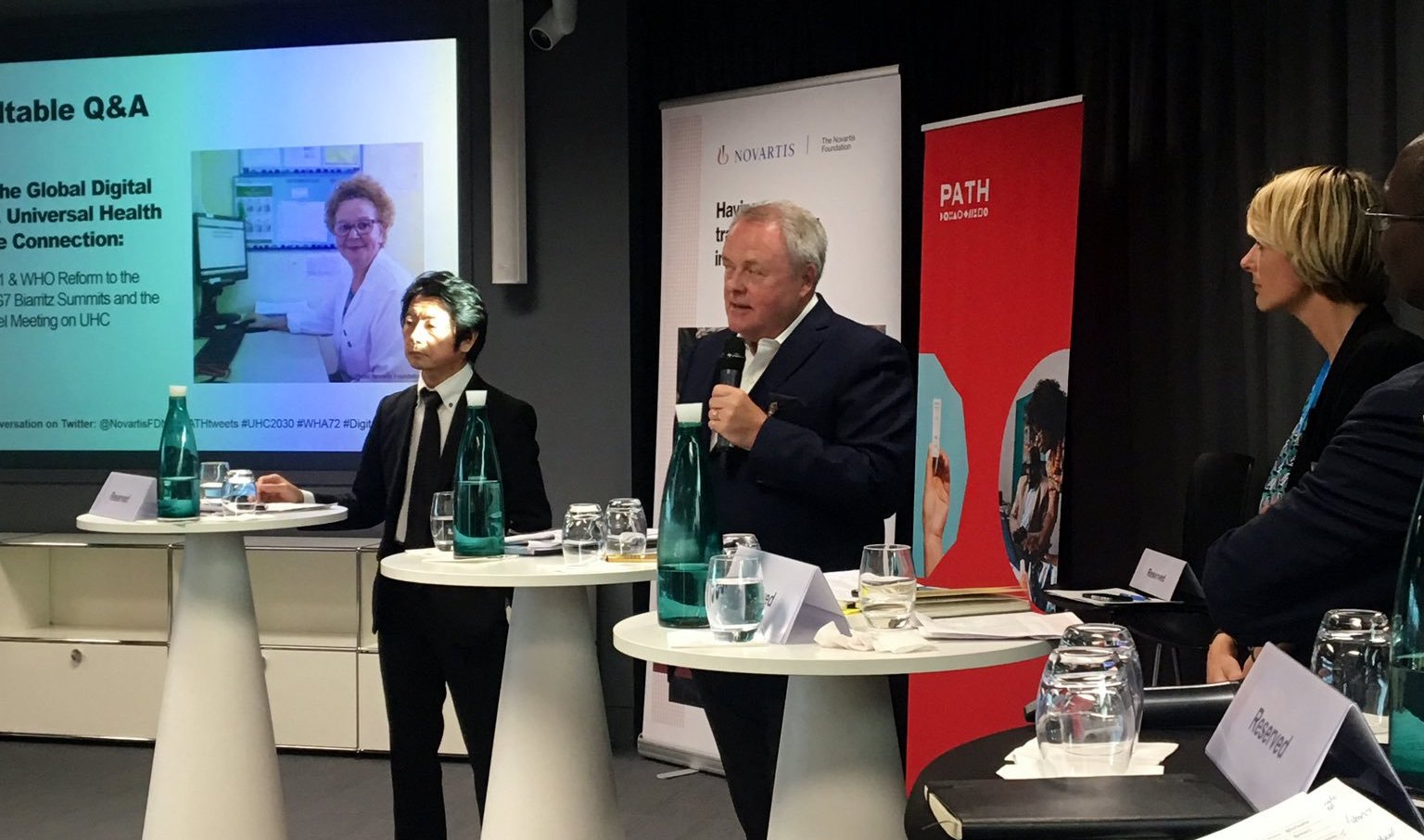 One important tool guiding investments is the Donor Alignment for Digital Health launched at the World Health Summit in Berlin in October 2018, noted Osamu Kunii, head of Strategy, Investment and Impact at the Global Fund to Fight AIDS, Tuberculosis and Malaria.

For Alan Donnelly of the G20 Health and Development Partnership, United Nations institutions have to appreciate the speed of digital change, in order to make progress. WHO, he said, should encourage greater involvement with the private sector, and in particular micro-entrepreneurs, who invent solutions at the grassroots. He also called for taking down the “firewall” between finance and health ministries to advance on the issue of digital health.

The 72th World Health Assembly is taking place from 20-28 May.