Africa’s goal of achieving herd immunity against COVID-19 hangs in the balance as 270 million doses of vaccines are yet to arrive in the continent despite being secured three months ago by the African Union (AU) and African Centres for Diseae Control (ACDC).

Mid-January 2021, Health Policy Watch reported that the Africa CDC had pre-ordered millions of much-needed vaccines from various suppliers. But to date not even the centre’s leadership knows when the first set of shipment is due to arrive – or which country will be the first to receive the doses.

With two weeks to the anticipated April roll-out of the vaccine, Dr John Nkenkasong, Director of the Africa CDC, told Health Policy Watch that the finalisation of the process, by which Member States of the African Union (AU) can confirm and obtain their doses, is yet to occur. This includes the negotiations with the Afreximbank which is providing African countries with credit facilities, with which they can procure doses of the vaccines from the manufacturers.

“Most of the processes and negotiations are work in progress,”  said Dr Nkenkasong. 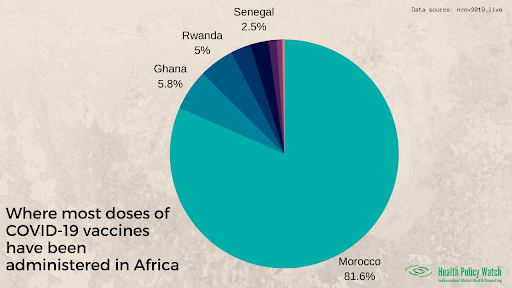 In the statement in January announcing the acquisition of the 270 million doses, the African Vaccine Acquisition Task Team (AVATT) established by African Union Chair President Cyril Ramaphosa, said the doses will be supplied by Pfizer, Johnson & Johnson and AstraZeneca (through an independent licensee, Serum Institute of India).

“From the onset of this pandemic, our focus as a continent has been on collaboration and collective effort. We have held steadfastly to the principle that no country should be left behind,” Ramaphosa said at the time.

AVATT officials said at the time that all 270 million vaccine doses will be made available this year with at least 50 million being available for the crucial period of April to June 2021.

Africa CDC then asked African countries to order doses through the African Medical Supplies Platform and when the deadline for the expression of interest expired in mid-February, Nkenkasong revealed that only about 26 countries (less than half of the countries in Africa) had expressed interest in securing doses through the platform.

But less than two weeks to April, there is no clear indication of whether the doses will be available by April or not.  And any delays would threaten the goal of achieving herd immunity for COVID-19 in Africa within one year, as AU and Africa CDC officials aim to do.

Last week, the president of the African Development Bank, Dr. Akinwumi Adesina called for vaccine justice for Africa. Speaking at the launch of the Bank’s African Economic Outlook 2021 report on Friday, Adesina decried the lack of Covid-19 vaccines reaching Africa.

“So far, 14.6 million vaccines have been delivered in Africa, but many people still cannot get shots in their arms. That is only 1% of what we need. We are way off the mark in terms of getting to 60% of herd immunity, and sadly, I do not see that happening for another year or two at this rate— not unless things change,” Adesina said.

According to him, there is a need to improve Africa’s access to vaccines. But so far, the COVAX Facility has been the major source of vaccine doses available to African countries, beginning with Ghana in late February.   However, the COVAX supplies would cover only about 20% of the population, at most, by the end of 2021.

“COVAX is doing a great job but still, we need more. We need them in adequate quantity. We need them quickly and we need them at an affordable price,” Adesina said.

Negotiations to Secure Vaccine Doses “are really out of our hands”

Nkenkasong is a major proponent of African countries accessing vaccine doses through multiple means considering COVAX will only provide doses for one in five of those needing jabs. But he told Health Policy Watch that several aspects of the processes involved in securing the doses of the various COVID-19 vaccines are beyond the control of the public health agency.

“Our own role is to say to the continent — this is the kind of vaccines we should get, this is exactly why we should get this vaccine and these are the targets that we are trying to achieve. The rest of the back end negotiations are really out of our hands. So be patient with us,” Nkenkasong told Health Policy Watch.

But the non-arrival of the doses of COVID-19 vaccines, which have been expected through AVATT,  has not stopped Africa CDC from getting involved in the roll-out of COVID-19 vaccines in the tens of African countries where COVAX-supplied doses are available.

“What we are doing is to collect all those vaccines that are coming in, in a dashboard, project them and show where each country is with respect to getting to 60%. That is our role and we will use that to catalyse the process and advocate for more partners,” Nkenkasong said.