IBADAN, NIGERIA – So far the continent has been obliged to look on as developed countries vaccinate millions of their citizens against SARS-CoV-2, but now African countries may also soon gain access to COVID-19 vaccines.

In a striking show of political unity, the African Union (AU) has secured provisional commitments to procure some 270 million COVID-19 vaccine doses for its 55 member states, and 50 million of those doses will be available before April 2021.

Notably, the move was taken independently and outside of channels of international donor assistance. The doses which were secured by the African Vaccine Acquisition Task Team (AVATT), will be supplied by Pfizer, AstraZeneca (through an independent licensee, the Serum Institute of India) and Johnson & Johnson, whose vaccine is set to go before the United States Food and Drug Administration for approval later this month.

AU Chair and the President of South Africa, Cyril Ramaphosa, disclosed in a statement that the secured doses are in addition to those the continent has been guaranteed through the WHO co-sponsored COVAX Facility.

COVAX — an initiative aiming to deliver vaccines to low- and middle-income countries, and co-led by Gavi, the Vaccine Alliance — has secured an estimated 600 million doses for the continent.

The need to access vaccines outside of the COVAX framework has become apparent insofar as the limited supplies available would leave many Africans unprotected if the continent were to rely on the Facility alone, said Dr John Nkengasong, Director of the Africa Centers for Disease Control (Africa CDC).  COVAX aims to procure and supply vaccines for about 20% of the population in countries that have joined the facility in 2021.

“COVAX has said [it] will supply the continent with about 20% of our needs,” Nkengasong said during a press conference.

“And our vaccine strategic plan states that we need to vaccinate at least 60% of the population of the continent of 1.2 billion to achieve population immunity.”

“From the onset of this pandemic, our focus as a continent has been on collaboration and collective effort,” Ramaphosa said. “We have held steadfastly to the principle that no country should be left behind.

“With this in mind, we have not only campaigned vigorously for changes through all the available international forums, but we have taken the additional step to independently secure vaccines using our own limited resources as member states.”

WHO Not Opposed To Procurement Outside COVAX Framework

Dr Matshidiso Moeti, WHO Regional Director for Africa told Health Policy Watch on Thursday that the Organization is not opposed to individual African countries securing their own doses outside of the COVAX arrangement.

Moeti’s remarks directly contradicted those of WHO Director General Dr Tedros Adhanom Ghebreyesus at a WHO press conference last Friday, when the DG admonished countries not to make more deals outside of the COVAX framework.

Her more positive reaction to the AU moves, likely reflect both an increasing realism about the limits of what COVAX can supply – as well as the fact that the AU is acting on behalf of a large bloc of states that have often been the last in line for new health innovations.

According to Moeti, WHO encourages countries to try every opportunity to mobilize the additional resources outside of COVAX, and to secure additional supplies.

“The important thing is to reach a coverage of the population that will then stop the circulation of the virus,” Moeti said.

But she also warned Africa’s WHO member states to refrain from ordering vaccines that have not been adequately tested in clinical trials.

“WHO is and will continue to license some vaccines for emergency use, as manufacturers share data” with the health body, she added.

In fact, two of the three vaccines on the AU shopping list,  Pfizer’s and AstraZeneca’s  have already been approved already by United States, British and/or European regulatory authorities. And the J&J vaccine’s Phase 3 results are due to be published in about two weeks time, with the USFDA submission following shortly thereafter, according to a statement by the company on Wednesday.

While Moeti did not mention specific vaccines to avoid, or countries, by name, The Seychelles is reportedly rolling out the Sinopharm vaccine produced by China, that has not undergone an independent and transparent review. In a related development, Brazil just reported that China’s CoronaVac vaccine had shown an efficacy rate of just over 50 percent in trials conducted there – meaning it barely passes the mark for efficacy. That was after Brazil had already pre-ordered some 380 million doses.

Some other African countries also are reportedly considering purchases of Russia’s Sputnik vaccine, produced by the Gamalaya research institute.  Phase 3 Clinical trial results on the Sputnik vaccine also have not yet been reported either in the peer-reviewed press, to WHO or to any national regulatory agency that undertakes a transparent review process.

One recent report, published just before the AU announcement, noted that so far 21 African countries had ordered vaccines in bilateral deals, for a total 260 million doses. Some 35% of those orders involve AstraZeneca doses for 7 countries, 33% of the doses represent China’s Sinopharm vaccine orders by 4 African countries, and just 1% of total doses are being ordered from Russia, the report by Development Reimagined stated.

“Overall, only 4 of the 21 have ordered enough to cover more than 20% of their population so far,” the report went on to say, noting this was not even considering “the other 34 African countries that have not made any orders as yet”.

With regards to accessing the bulk AU vaccine purchase, African countries across the continent can either use their own funds or obtain a five-year loan with the African Export-Import Bank (Afreximbank), to ensure African countries are not locked out of mass vaccination.

“Afreximbank will, upon receipt of firm orders from member states, provide advance procurement commitment guarantees of up to US$2 billion to the manufacturers on behalf of member states,” an AU statement read.

According to the terms of the loan, repayment will be required by installments and over a period of five years.

Additional funding arrangements have also been arranged by the AU and the World Bank so that AU member states will be able to access about US$5 billion either to buy more vaccines or pay for delivery of vaccines committed on their behalf by Afreximbank. 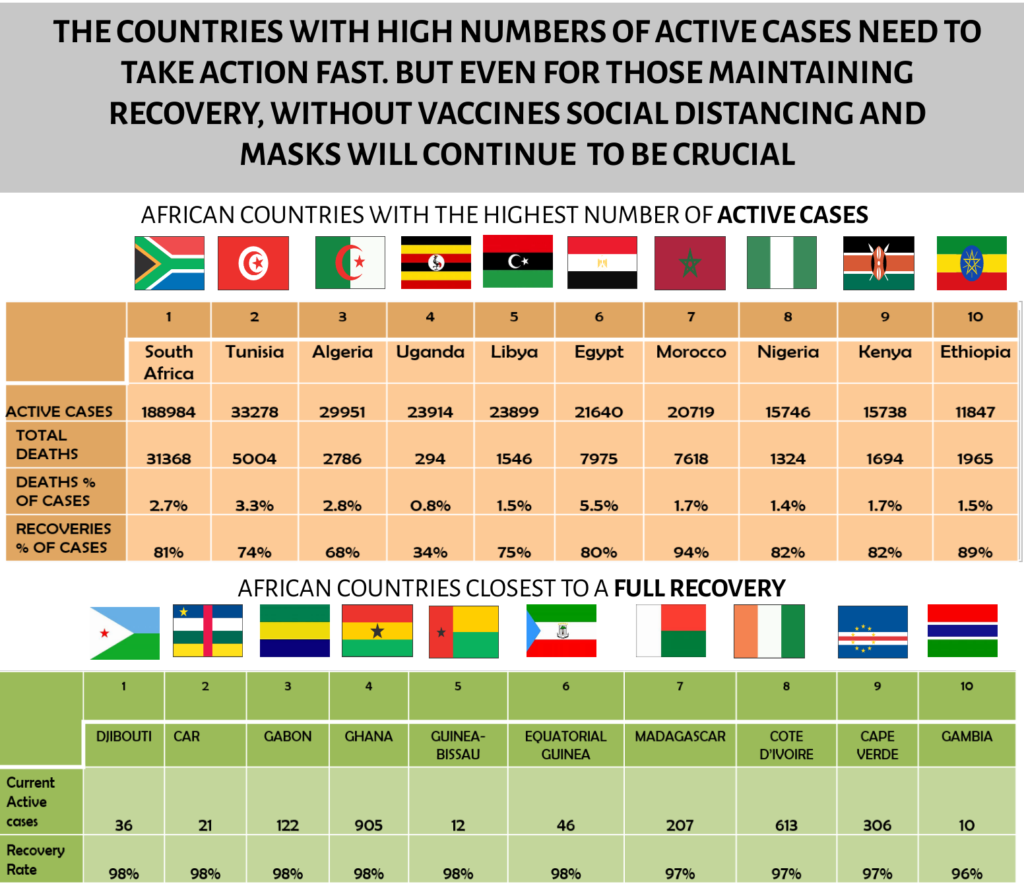 Over the last four weeks, Africa CDC said the number of confirmed cases across the continent has increased by 8% but the outlook varies across the regions.

In East Africa, despite the threats posed to the pandemic by the holiday season, cases dropped by 13%: a development that Nkenkasong described as “a good sign of hope”.

In Northern Africa, at least, Africa CDC said the pandemic recorded no changes suggesting some stability in the region.

Moeti noted the state of the pandemic suggests that there is a need to reinvigorate response at different levels, particularly at the individual and community levels.

“We need to be looking for cases and contacts. We need to be testing and getting the results as fast as possible,” she said.

“And we need to be more consistent about isolating and breaking the chain of infection from people who are infected so I do think we’ll go through a difficult month or so as we see the surge from the festive season.”