Rwanda has been selected to host the headquarters of the African Medicines Agency (AMA) by the Executive Council of the African Union (AU) at a meeting held in the Zambian capital of Lusaka on Saturday.

The council agreed that AMA will enhance the capacity of AU state parties and the continent’s Regional Economic Communities (RECs) to regulate medical products, and to improve Africa’s access to quality safe, and efficacious medical products.

“AMA will also support the creation of an enabling environment for pharmaceutical manufacturing on the continent,” AU announced, describing the agency as the second specialized health agency of the AU after the Africa Centres for Disease Control and Prevention (Africa CDC).

Rwanda’s been selected to host the HQ of the African Medicines Agency by the Executive Council meeting in Lusaka. AMA will enhance capacity of state parties and RECs to regulate medical products, to improve Africa’s access to quality safe, and efficacious medical products #AUMYCM pic.twitter.com/WDqjhPQEAk

Rwanda had submitted an expression of interest in hosting the AMA headquarters along with Uganda, Algeria, Egypt, Morocco, Tanzania, Tunisia and Zimbabwe, as Health Policy Watch reported in June.

“Congratulations Rwanda on the selection to host the African Medicines Agency (AMA). WHO will continue to provide technical & financial support to the AMA to ensure all people across the continent have equitable access to safe, quality medicines & medical products,” he tweeted.

Nuur Mohamud Sheekh, Spokesperson for the Executive Secretary of the Intergovernmental Authority on Development (IGAD), a regional development organization in East Africa, described hosting the AMA Headquarters as the latest achievement for Rwanda, which is already a leading technology destination on the continent.

Valens Munyabagisha, former president of Rwanda’s Olympic Committee, also attributed the selection of Rwanda as host country for AMA Headquarters as “good news and undoubtedly [the] result of good leadership”.

But Dr Ereck Chakauya, network manager of the AUDA NEPAD Southern Africa Network for Biosciences, noted that the priority should now be on delivering the promises of the initiative which includes boosting Africa’s manufacturing capacities for vaccines, drugs and others products.

“Congratulations Rwanda. Lets get on with making stuff. We have gone round the mountain for too long, now is the time to make vaccines for ourselves. Let’s give ourselves five years to make five drugs for the top five diseases of importance in Africa,” he said.

Next step: Finances and staff

“It’s encouraging to see progress made in the operationalisation of the AMA, and we must build on this momentum to ensure that more countries ratify the treaty establishing the agency. The next step is to ensure the AMA has the financial resources and is adequately staffed to deliver on its ambition,” said Greg Perry, Assistant Director-General of the International Federation of Pharmaceutical Manufacturers and Associations (IFPMA).

“Africa’s 55 nations and nearly 1.4 billion people need to benefit from a harmonized regulatory system for medical products – vaccines, treatments, diagnostics and other healthcare products. The AMA can make good on that promise,” he added.

“The AMA will facilitate collaboration, work-sharing and the use of reliance procedures between regulators that will enable faster approval processes, allowing a better allocation of resources and cutting down on the waiting time for patients to access medicines and ensuring a steady supply of medicines.”

The IFPMA  is part of the African Medicines Agency Treaty Alliance (AMATA), and works with regulatory authorities, the pharmaceutical industry in Africa, and relevant regulatory stakeholders to encourage greater harmonization and convergence of regulatory requirements.

Meanwhile, AMATA said the COVID-19 pandemic has “highlighted the importance of regulatory harmonisation in the context of public health emergencies and the need for a competent continent-wide regulatory authority to approve and monitor vaccines, repurposed medicines, innovative medicines and health technologies, in a timely manner”.

“The AMA will reduce the complexity of regulatory frameworks and hence enable all patients in Africa to have timely access to quality medicines that are safe and effective. We now call upon the remaining African Union Member States who have yet to ratify and deposit their AMA Treaty instruments to do so urgently so we can build on the current momentum gained with this major milestone,” said AMATA.

Thirty-one of the African Union’s 55 member states have now signed and/or ratified the AMA Treaty, with Ethiopia the latest to sign as of May 2022.

As the countdown for other nations to sign continues, Health Policy Watch is tracking progress on our AMA Countdown, website developed in collaboration with the African Medicines Agency Treaty Alliance. 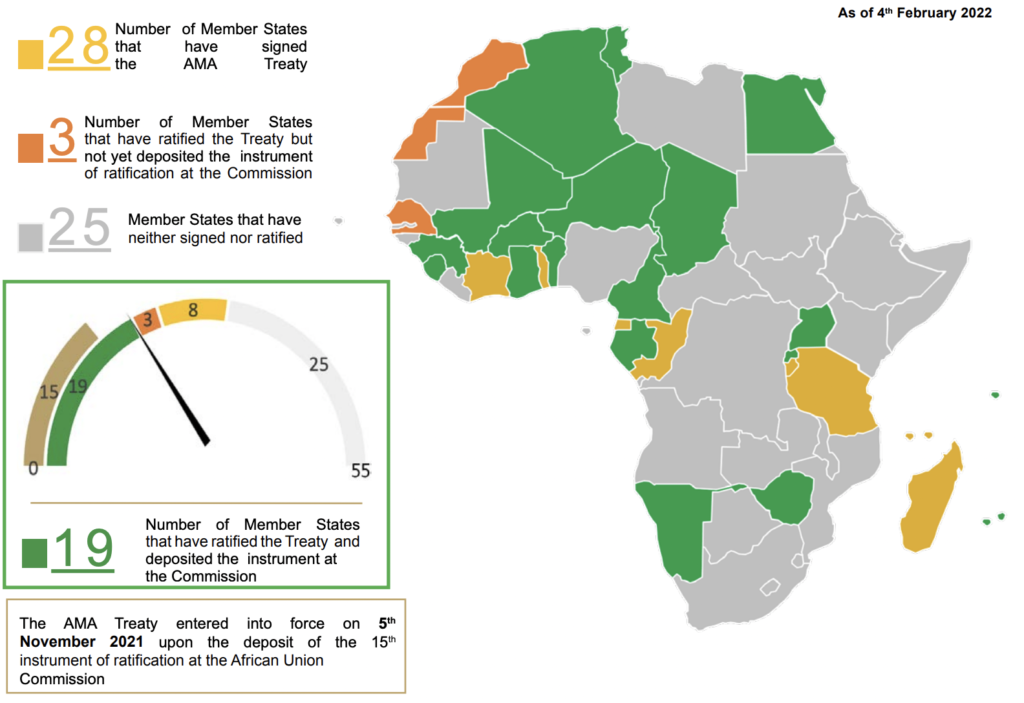 Prof Stanley Okolo, CEO of the West African Health Organization (WAHO), described the development as “a milestone which enhances Africa CDC’s ability to safeguard the health of the African population and contribute to global health security.”

Dr Matshidiso Moeti, WHO’s Regional Director for Africa,– also congratulated the Africa CDC on the adoption of its amended statute.

“A big congratulations to Africa CDC for their statute as an autonomous health body. I look forward to our continued collaboration in support of health security on the continent, as well as many other pressing health issues,” she tweeted.

Previously, Health Policy Watch reported that the WHO expressed concerns regarding the inclusion of power to declare a Public Health Emergency of Continental Security in Africa CDC’s amended statute.

However, Ahmed Ogwell Ouma, Africa CDC’s Acting Director, said the move is necessary to ensure that the Africa CDC does not have to wait for a long time for a public health emergency of international concern (PHEIC) pronouncement to be made by the WHO before swinging into full action.

“That is our expectation indeed. And that is the expectation of the African Union. That is why this request has been made,” Ouma said.

See our coverage on the development of the African Medicines Agency and the countdown for AU member states to formally ratify the AMA Convention here: