Rome, Italy – More people are going hungry, an annual study by the United Nations has found. Tens of millions have joined the ranks of the chronically undernourished over the past five years, and countries around the world continue to struggle with multiple forms of malnutrition.

The latest edition of the State of Food Security and Nutrition in the World, published today, estimates that almost 690 million people went hungry in 2019 – up by 10 million from 2018, and by nearly 60 million in five years. High costs and low affordability also mean billions cannot eat healthily or nutritiously. The hungry are most numerous in Asia, but expanding fastest in Africa. Across the planet, the report forecasts, the COVID-19 pandemic could tip over 130 million more people into chronic hunger by the end of 2020. Flare-ups of acute hunger in the pandemic context may see this number escalate further at times.

The State of Food Security and Nutrition in the World is the most authoritative global study tracking progress towards ending hunger and malnutrition. It is produced jointly by the Food and Agriculture Organization of the United Nations (FAO), the International Fund for Agriculture (IFAD), the United Nations Children’s Fund (UNICEF), the UN World Food Programme (WFP) and the World Health Organization (WHO).

Writing in the Foreword, the heads of the five agencies warn that “five years after the world committed to end hunger, food insecurity and all forms of malnutrition, we are still off track to achieve this objective by 2030.” 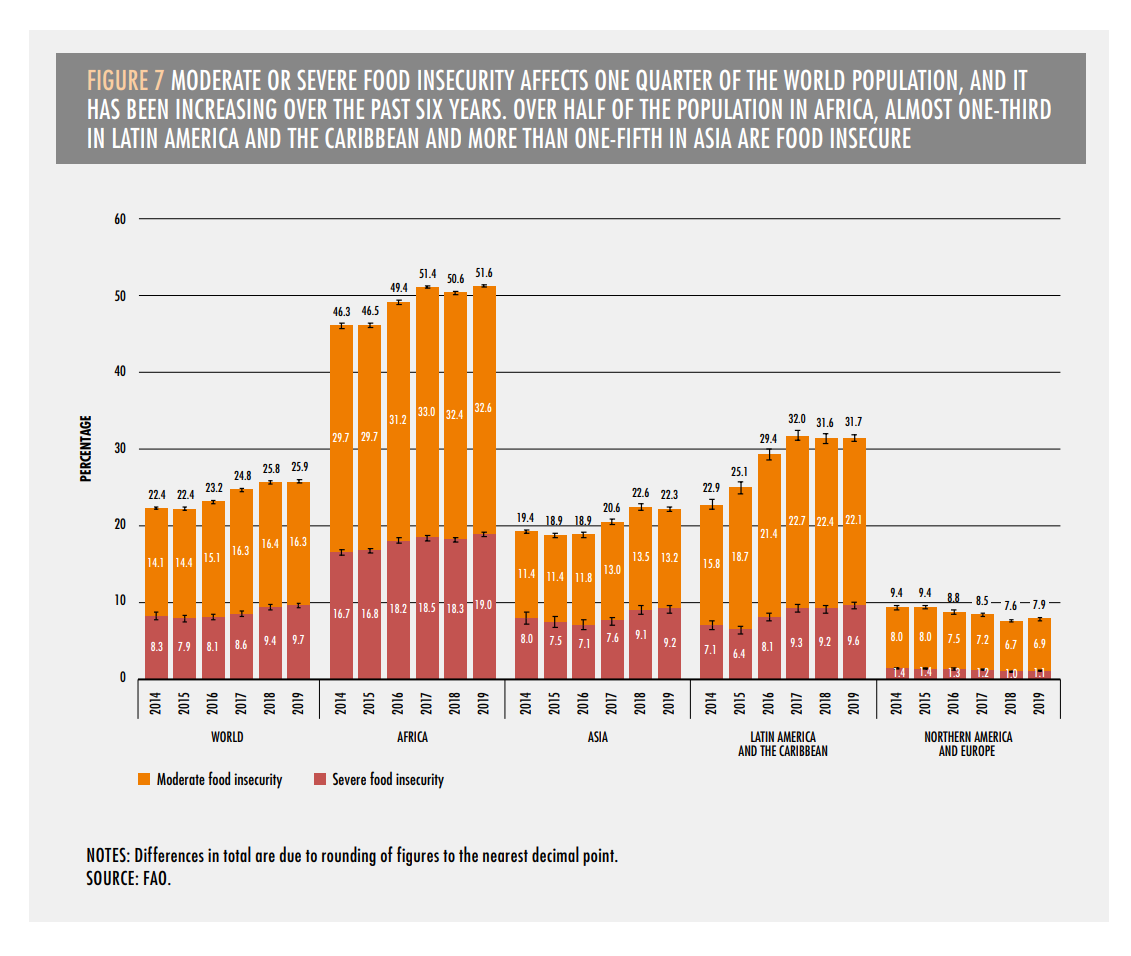 In this edition, critical data updates for China and other populous countries have led to a substantial cut in estimates of the global number of hungry people, to the current 690 million. Nevertheless, there has been no change in the trend. Revising the entire hunger series back to the year 2000 yields the same conclusion: after steadily diminishing for decades, chronic hunger slowly began to rise in 2014 and continues to do so.

Asia remains home to the greatest number of undernourished (381 million). Africa is second (250 million), followed by Latin America and the Caribbean (48 million). The global prevalence of undernourishment – or overall percentage of hungry people – has changed little at 8.9 percent, but the absolute numbers have been rising since 2014. This means that over the last five years, hunger has grown in step with the global population.

This, in turn, hides great regional disparities: in percentage terms, Africa is the hardest hit region and becoming more so, with 19.1 percent of its people undernourished. This is more than double the rate in Asia (8.3 percent) and in Latin America and the Caribbean (7.4 percent). On current trends, by 2030, Africa will be home to more than half of the world’s chronically hungry.

As progress in fighting hunger stalls, the COVID-19 pandemic is intensifying the vulnerabilities and inadequacies of global food systems – understood as all the activities and processes affecting the production, distribution and consumption of food. While it is too soon to assess the full impact of the lockdowns and other containment measures, the report estimates that at a minimum, another 83 million people, and possibly as many as 132 million, may go hungry in 2020 as a result of the economic recession triggered by COVID-19. The setback throws into further doubt the achievement of Sustainable Development Goal 2 (Zero Hunger). 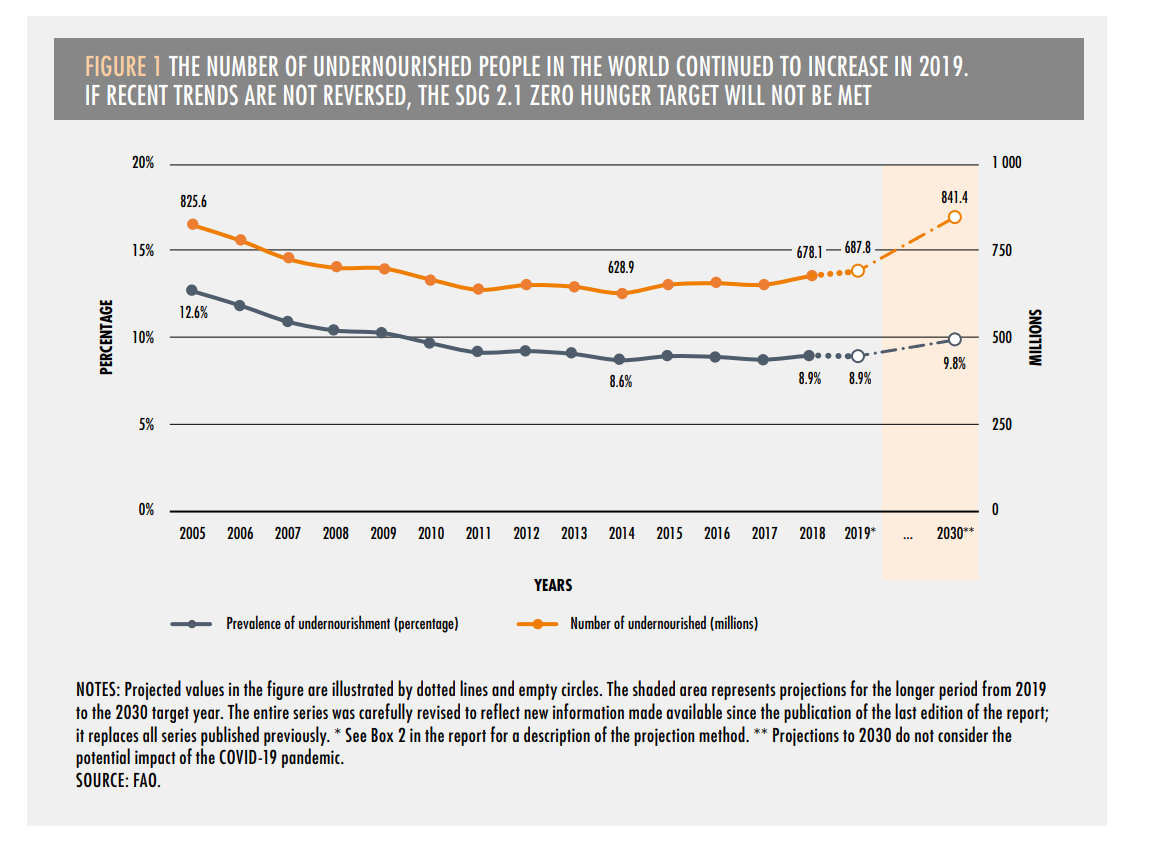 Overcoming hunger and malnutrition in all its forms (including undernutrition, micronutrient deficiencies, overweight and obesity) is about more than securing enough food to survive: what people eat – and especially what children eat – must also be nutritious. Yet a key obstacle is the high cost of nutritious foods and the low affordability of healthy diets for vast numbers of families.

The report presents evidence that a healthy diet costs far more than US$ 1.90/day, the international poverty threshold. It puts the price of even the least expensive healthy diet at five times the price of filling stomachs with starch only. Nutrient-rich dairy, fruits, vegetables and protein-rich foods (plant and animal-sourced) are the most expensive food groups globally.

The latest estimates are that a staggering 3 billion people or more cannot afford a healthy diet. In sub-Saharan Africa and southern Asia, this is the case for 57 percent of the population – though no region, including North America and Europe, is spared. Partly as a result, the race to end malnutrition appears compromised. According to the report, in 2019, between a quarter and a third of children under five (191 million) were stunted or wasted – too short or too thin. Another 38 million under-fives were overweight. Among adults, meanwhile, obesity has become a global pandemic in its own right.

A call to action 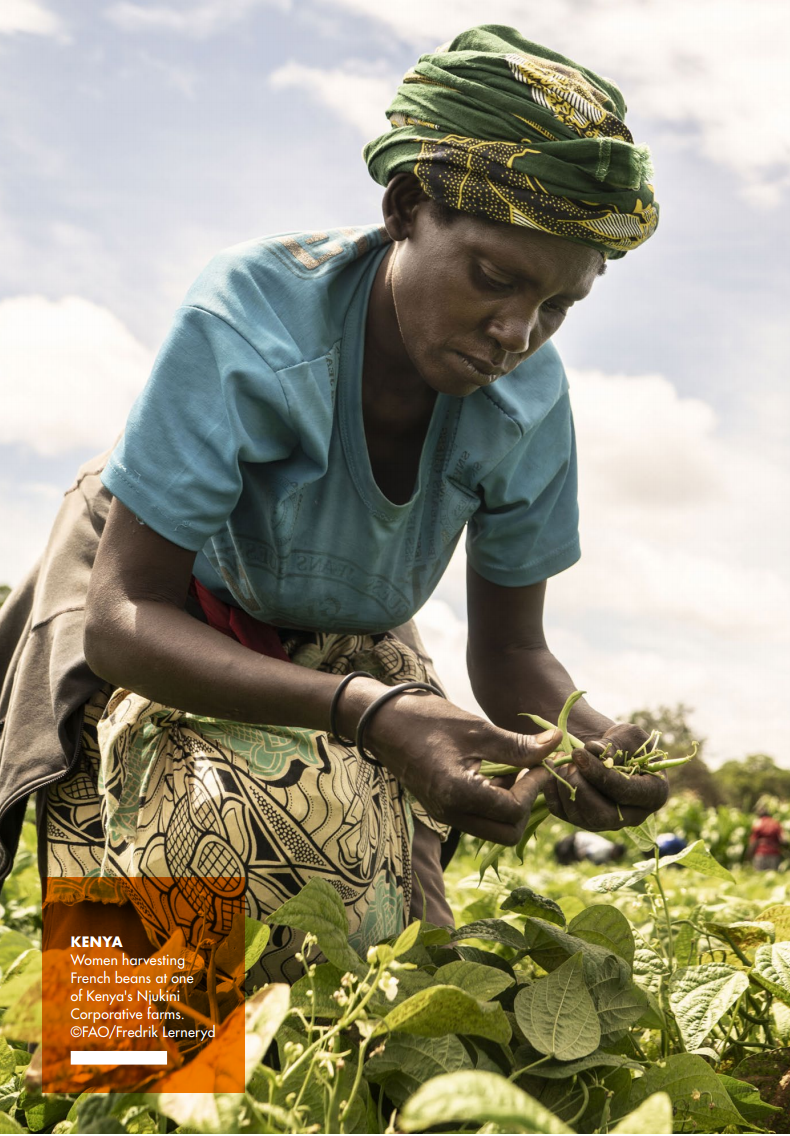 The report argues that once sustainability considerations are factored in, a global switch to healthy diets would help check the backslide into hunger while delivering enormous savings. It calculates that such a shift would allow the health costs associated with unhealthy diets, estimated to reach US$ 1.3 trillion a year in 2030, to be almost entirely offset; while the diet-related social cost of greenhouse gas emissions, estimated at US$ 1.7 trillion, could be cut by up to three-quarters.

The report urges a transformation of food systems to reduce the cost of nutritious foods and increase the affordability of healthy diets. While the specific solutions will differ from country to country, and even within them, the overall answers lie with interventions along the entire food supply chain, in the food environment, and in the political economy that shapes trade, public expenditure and investment policies. The study calls on governments to mainstream nutrition in their approaches to agriculture; work to cut cost-escalating factors in the production, storage, transport, distribution and marketing of food – including by reducing inefficiencies and food loss and waste; support local small-scale producers to grow and sell more nutritious foods, and secure their access to markets; prioritize children’s nutrition as the category in greatest need; foster behaviour change through education and communication; and embed nutrition in national social protection systems and investment strategies.

The heads of the five UN agencies behind the State of Food Security and Nutrition in the World declare their commitment to support this momentous shift, ensuring that it unfolds “in a sustainable way, for people and the planet.”