The ground level of the Geneva International Conference Centre was buzzing with conversations about machine learning, algorithms and deep learning, at the third edition of the International Telecommunication Union’s AI for Good global summit last week (28-31 May).

A buzzword for some, an already essential tool for others, artificial intelligence (AI) powered applications seem to be getting smarter, able to learn by experience, and provide an array of solutions for health, ranging from personalised medical advice, to preventing maternal and new-born deaths, as well as blindness.

And their applications are increasingly relevant to health care solutions in developing countries, where many people still lack ready access to medical professionals, particularly specialists.

This year’s event with over 300 speakers was dedicated to identifying “practical applications of AI to advance the SDGs [Sustainable Development Goals].” Among those, one of the featured innovation tracks was SDG 3 for “Good health and well-being.” Some of the more intriguing highlights are reported here, following a tour of the conference by a Health Policy Watch reporter. 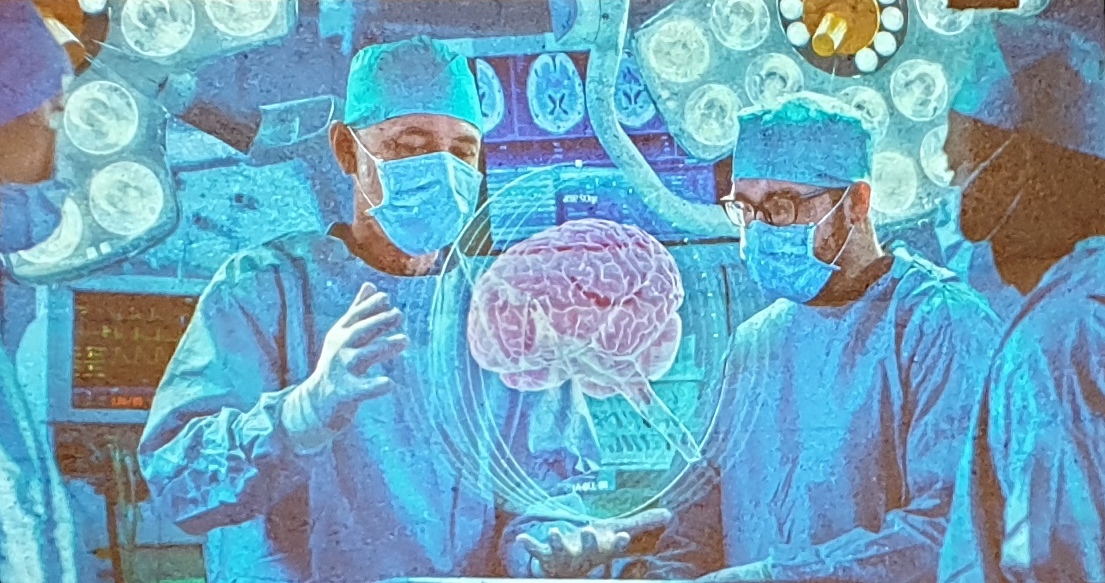 Two Minutes Per Patient in China, 45 Seconds in Bangladesh

Over 4 billion people worldwide still lack basic primary health care centres, and the developing world faces a “massive shortage of health workers”, notes Hila Azadzoy, managing director of a Global Health Initiative at Ada Health. The number of medical doctors per capita is often very low, and even if a patient does see a doctor, time spent may be minimal. In China, Azadzoy said, the average time spent per patient by hospital doctors is 2 minutes, and in some “extreme cases,” it may be even less – she added, citing an average of 45 seconds in Bangladesh. This critical situation leads to misdiagnosis for sheer lack of time and intense pressure, she said.

Ada Health is an AI-powered health platform, with a phone app acting as a health guide. Since its global launch in 2016, Ada has been used by 6 million people worldwide, including over 1 million in India alone, Azadzoy said. The platform helps assess patients’ symptoms and navigate to the appropriate care.

China, by its own account, aims to become the global leader in AI, and the country is investing heavily in AI-powered health solutions, said Yan Huang, senior director of AI Innovation and AI Health lead at the Chinese tech company Baidu. She underlined that an aging population will exacerbate the problems faced with a shortage of medical personnel. By 2030, 25 percent of the Chinese population will be over 60. But AI technology also can help speed discovery and treatment of age-related diseases, citing as an example an AI-powered ocular fundus screening. The technology can detect conditions such as diabetic retinopathy, glaucoma, and age-related macular degeneration, and produces detailed reports.

Another “breakthrough” session featured new AI-supported diagnostic technologies, such as the Antigen Map Project. Relying on adaptive biotechnologies, it allows for the early detection of multiple diseases from a single blood test, said Hadas Bitran, Head of Microsoft Healthcare Israel, one of the partners in the project. Using machine learning, the Antigen Map Project is identifying and mapping the millions of different T-cells that exist in the body’s immune defence system, linking those with the millions of pathogens they are specifically targeted to attack.

At the individual level, the mapping would “make it possible to read what an immune system has fought or is currently fighting, with the goal of creating a better diagnostic for all diseases—from cancer to autoimmune conditions to infectious diseases,” according to the companies website.  Added Bitran, “Our technologies aim to improve operational outcomes, empower care teams, and enable personalised care in order to create better healthcare experiences, provide better insights… and to deliver better outcomes.”

According to Jonathon Carr-Brown, YourMD advisor, the innovation was designed in response to studies from countries with well developed health systems, which found a lot of time is wasted in medical consultations.  Carr-Brown said that studies of health systems in the UK and other developed countries have found that some 20 percent of general practitioners’ time is spent discussing ailments that could otherwise be handled by pharmacists, other health professionals, or by self-care. YourMD can reduce people’s anxiety and dampen the impulse to go straight to a doctor, he said.

Alvin Kabwama Leonard, head of Applied Machine Learning at Cognitive AI Tech Limited in Uganda, began his presentation with a sentimental video in which celebrities gave tribute to their mothers. From that, he described how the company had developed UriSAF, an AI algorithm to detect urinary tract infections in pregnant women, a leading cause of morbidity and even mortality in developing countries.

Another African-startup, Ubenwa Intelligence Solutions, is trying to save new-borns through a machine-learning algorithm system which comes as a mobile app and analyses infant cries to prevent birth asphyxia. Charles Onu, founder and AI Research lead for the firm, said birth asphyxia is one of the leading causes of infant mortality in the world. It leads to an annual toll of 1.2 million infants’ death, and approximately the same number of children affected with life-long disabilities such as cerebral palsy, deafness, and paralysis.

Discussions about sex and HIV in Indonesia remain highly taboo: “nobody talks about HIV,”  “and there is no sexual education at school,” said Ingrid Silalahi, Public Information consultant for UNAIDS Indonesia. Young people are particularly at risk of HIV, as shown by studies estimating that 52 percent of them participate in the growth of HIV in Indonesia, she explained. Gay or transgender people cannot browse Google about HIV, “they are scared to be found out.”

As a solution, UNAIDs Indonesia launched the AI-powered chatbot named “Ask Marlo” in 2018.

Ask Marlo features clear, factual information about HIV, dispelling myths and explaining how to prevent infection. Users can also test their knowledge with a quiz and book an appointment online at a clinic for testing, as well as arranging a chat with a real-life counsellor. “Ask Marlo is seen as a safe space,” she said.

For the moment, the app is tailored specifically to Jakarta, using vocabulary and expressions used by young people in that city. As there are some 300 ethnic groups in Indonesia, the system has yet to be adapted to different cities and ethnicities. One of the next steps for Ask Marlo is to use AI so that the system thinks, analyses, and learns by itself, she added.

Along with diseases diagnosis and healthcare treatment, AI can play a leading role in preventing environmental health risks, such as air pollution, says Ihsane Gryech, Ph.D. candidate in Data Science at the University of Morocco. She notes that air pollution-related diseases currently kill more people in Africa than malnutrition or unsafe drinking-water. Gryech presented the “MoreAir Strategy” project, launched in January 2017. The project aims at developing a machine-learning based geographical information system (GIS) which can disclose local real time urban air pollution rates, and after analysing the data, provides predictions on air pollution in a given city.