Antibiotic-resistant bacterial infections killed 1.27 million people in the world in 2019, according to a one-of-a-kind study in The Lancet.

According to the study, led by the Institute of Health Metrics and Evaluation (IHME) at the University of Washington, with dozens of authors worldwide, the increased resistance of many common pathogens to treatment, known as antimicrobial resistance (AMR), was a leading cause of death worldwide in 2019.

AMR caused more fatalities than HIV/AIDS or malaria, which caused 860,000 and 640,000 deaths respectively, in the same time period.  More people than ever are dying from previously treatable infections since the bacteria causing such infections have become resistant to previously life-saving drugs.

The study is the first to comprehensively estimate annual deaths from AMR – a global risk that so far has lacked systematic quantification, including by the World Health Organization (WHO). The study highlights how a number of common respiratory pneumonia and bloodstream infections that were previously treatable – have become antibiotic-resistant to treatment causing hundreds of thousands of deaths a year.

Action is needed now to combat the rising threat

“These new data reveal the true scale of antimicrobial resistance worldwide, and are a clear signal that we must act now to combat the threat,” said study co-author Chris Murray, director of IHME.

“Previous estimates had predicted 10 million annual deaths from antimicrobial resistance by 2050, but we now know for certain that we are already far closer to that figure than we thought. We need to leverage this data to course-correct action and drive innovation if we want to stay ahead in the race against antimicrobial resistance.”

The 10 million deaths refers to data from a UK government-commissioned study. That number was a benchmark for the landmark 2019 UN report on AMR that warned of a looming crisis, called “No Time to Wait”. But it has been widely criticized inside WHO and elsewhere as lacking precise current data. The Lancet study should fill that gap.

The study included a review of nearly 10,000 sources, including literature, lab data, household surveys and national mortality data. The research and modelling of trends extend across 204 countries and territories – thus covering virtually every place on the planet. It assessed some 88 pathogen–drug combinations. Of the 23 pathogens studied, lower respiratory and thorax infections, bloodstream infections, and intra-abdominal infections accounted for 78.8% of the deaths caused by AMR in 2019.

The paradoxical reasons cited for growing resistance to treatment include both problems of excessive and inappropriate use of antibiotics, but also insufficient access to the drugs even in the same geographical areas. This is a particular problem in low-income settings where access to a wide array of medicines is more restricted.

Which pathogens are the most resistant?

Six pathogens were associated with the greatest burden of AMR deaths: E coli, Staphylococcus aureus, K pneumoniae, S pneumoniae, acinetobacter baumannii, and Pseudomonas aeruginosa. These collectively accounted for over 900,000 of the 1.27 million deaths caused by drug resistance in 2019.

S.aureus and E.coli were the leading cause of deaths in high-income regions in 2019, while resistance to  S pneumoniae and K pneumoniae were the biggest killers in sub-Saharan Africa.

Meanwhile, resistance to two main antibiotics considered the go-to responses for severe infections – fluoroquinolones and beta-lactam antibiotics, including penicillins and cephalosporins – was responsible for over 70% deaths 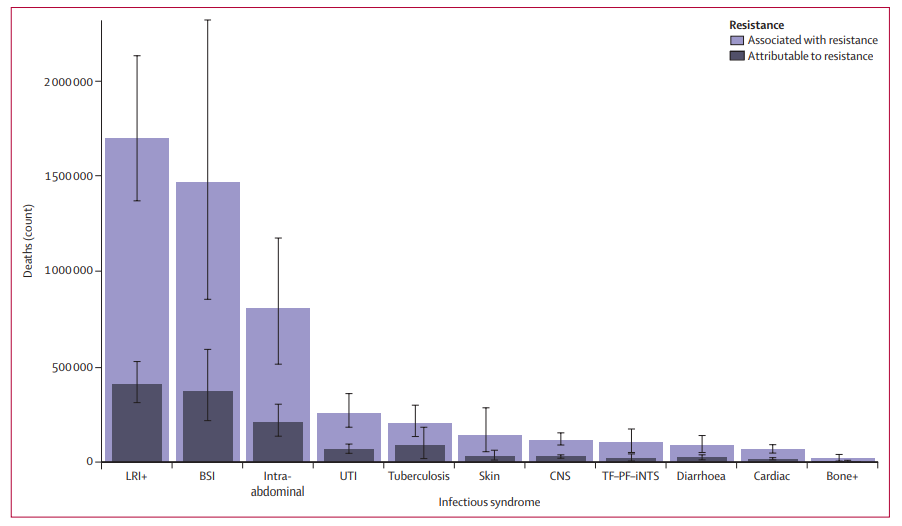 Poorer countries have it worse

The study also highlights the large regional disparities in the worldwide scale and spread of bacterial-related AMR.

The entire sub-Saharan Africa region, and south Asia region had an estimated all-age death rate of 75 per 100,000 associated with bacterial AMR.

According to the study, the higher AMR burden is both a function of the prevalence of resistance as well as the underlying frequency of critical infections such as lower respiratory infections, bloodstream infections, and intra-abdominal infections –which are seen to be higher in these regions.

“Some of the AMR burden in sub-Saharan Africa is probably due to inadequate access to antibiotics and high infection levels, albeit at low levels of resistance, whereas in south Asia and Latin America, it is because of high resistance even with good access to antibiotics,” commented Dr Ramanan Laxminarayan, founder and Director of the Center for Disease Dynamics, Economics & Policy, in Washington, DC, writing in a linked Comment.

In November, WHO’s Africa Region said that over four million Africans a year could die as a result of antimicrobial resistance by 2050.

Along with more appropriate use of antibiotics, insure both access but not excessive use, vaccinations also are paramount for combating AMR, the study’s authors underlined.

And this includes vaccines against viral pathogens like influenza, respiratory syncytial virus, and rotavirus  – which in turn reduce the risks of secondary bacterial infections and subsequent treatment, which means less dependency on inappropriate antibiotic consumption.

At the same time, there is an urgent need to reduce the use of antibiotics as a first-line treatment for viral infections, in which case antibiotics are not effective.

Given that AMR affects low-and-middle-income countries more than higher-income ones, the study also recommends scaling up and building stronger diagnostics infrastructure that allow clinicians to diagnose infection more accurately and rapidly.  At the same time, the study shows, maintaining investment in the development pipeline for new antibiotics, and access to second-line antibiotics in locations without widespread access is essential.

“From being an unrecognised and hidden problem, a clearer picture of the burden of AMR is finally emerging,” Laxminarayan said in his comment, noting that spending on HIV “attracts close to US$50 billion each year. However, global spending on addressing AMR is probably much lower than that. This needs to change.

“Spending needs to be directed to preventing infections in the first place, making sure existing antibiotics are used appropriately and judiciously, and to bringing new antibiotics to market. Health and political leaders at local, national, and international levels need to take seriously the importance of addressing AMR and the challenge of poor access to affordable, effective antibiotics.”

This study was funded by the Bill & Melinda Gates Foundation, Wellcome Trust, and Department of Health and Social Care using UK aid funding managed by the Fleming Fund.

But the international consortium that authored the study, the Antimicrobial Resistance Collaborators, identified serious data gaps in many low-income countries, underlining the importance of increasing laboratory capacity and data collection in these locations.

This is all the more critical insofar as resistance varies substantially by country and region – both in terms of what bacteria are more resistant and what drugs are more or lesss effective, researchers stressed.

“Improving the collection of data worldwide is essential to help us better track levels of resistance equip clinicians and policymakers with the information they need to address the most pressing challenges posed by antimicrobial resistance,” said Professor Christiane Dolecek, at Oxford University’s Centre for Tropical Medicine and Global Health and the Mahidol Oxford Tropical Medicine Research Unit.

In his comments, Laxminarayan also emphasized the need for more AMR data collection in low-income countries saying: “Progress ahead will depend on projects such as those supported by the Fleming Fund, which aim to improve laboratory capacity in LMICs while also uncovering resistance data that lie on dusty shelves and in long-forgotten hard drives.”

Senior WHO officials, including Chief Scientist Soumya Swaminathan,  welcomed the new IHME report as filling a critical knowledge gap and highlighting the long-neglected issues around AMR.

“Lack of robust global data and evidence of the impact of drug-resistance has been a critical knowledge gap and has hampered efforts to advocate for policies and practices to control antimicrobial resistance,” said WHO in a series of tweets. “This study now clearly demonstrates the existential threat”.

Lack of robust global data and evidence of the impact of drug-resistance has been a critical knowledge gap and has hampered efforts to advocate for policies and practices to control #AntimicrobialResistance. https://t.co/cG6IabMSGU pic.twitter.com/I3brlhFQwK

Meanwhile, pharma voices described it as a ”wake up call”:

“This is a wake-up call for us all, industry has been a first mover in finding solutions.  Now the focus has shifted to governments who must deliver new economic incentives, pragmatic antibiotic value assessments, and reimbursement reforms to enable access, that are needed to meet the needs of patients of today and tomorrow.”