A nature-based solution that could help reduce the rising global burden of disease from dengue fever is looming on the research horizon. But more studies are needed before the World Health Organization could recommend a broad scale-up of the approach, WHO’s chief scientist said on Wednesday.

WHO Chief Scientist Soumya Swaminathan summed up her conclusions on the research to date into Wolbachia bacteria as a dengue control tool at a panel event hosted by the Geneva Science and Diplomacy Anticipation Summit. The 2022 GESDA Global Summit is taking place this week from Wednesday to Friday.

“Safety is quite the primary thing for us…making the recommendation is one thing and using and applying it is another. Of course, the WHO’s role is to provide evidence-based guidelines in as timely a fashion as possible, but if there isn’t good evidence backing it, the [WHO] guideline developing group does not feel comfortable,” Swaminathan said.

The discussion on Wolbachia at a session on Controlling Vector-transmitted Infectious Diseases was among a number of future health strategies showcased at the three-day summit, which drew together some 1200 scientists, diplomats and other expert participants from around the world.

This year’s agenda also includes discussions around the future potential for artificial intelligence, organoids and other synthetic biology approaches to address disease pathology and pave the way for new disease control solutions, from organ transplants to mood disorders.

Science that makes no sense today, may make sense tomorrow

“Science that makes no sense today may make sense tomorrow,” said Sir Jeremy Farrar, the director of Wellcome Trust, who appeared with Swaminathan at the vector control control panel on the opening day of the GESDA conference.

Farrar  described the work on Wolbachia, led by  Dr Scott O’Neill, founder of the World Mosquito Programme as the kind of pathfinding research that GESDA aims to identify and amplify – accelerating the long journey to real-world results.

“GESDA wasn’t in existence when Scott (O’Neill) started his work. But if it had been, this would be a case study as to why GESDA was important,” Farrar said.  “It was in the last century when this work started, with basic science invested over years and years. It was high risk, it was difficult..no one could see where it was going…It made no sense.”

A potentially sustainable solution to dengue that took decades to develop

Over the past two decades, the number of dengue cases reported to WHO has increased ten-fold. While estimates of the true rate of infections varies wildly, data by the Institute of Health Metrics and Evaluation (IHME) estimates a burden of more than 50 million cases a year, concentrated in South-East Asia.

Research on the Wolbachia’s potential as a control tool began in the 1980s. But the bacteria’s ability to compete with, and thus curtail, dengue virus transmission in Aedes mosquitoes only came to light around 2009. The experimental technology involves the injection of Wolbachia bacteria into female Aedes mosquitoes. Within the mosquito, the bacteria competes with dengue virus, Zika and other dangerous mosquito-borne diseases, curbing the mosquito’s potential to transmit those viruses to human beings.

The female mosquitoes also continue to transmit the beneficial Wolbachia bacteria from one generation to the next within their eggs. Although not normally found in Aedes aegypti mosquitoes, Wolbachia is found in some 50% of insects in the world, and thus considered safe for humans and the environment, according to the researchers.

First release in Australia in 2011

In 2011, O’Neill and his team based at Monash University released the first set of Wolbachia-infected Aedes mosquitoes into the wild in Cairns, Australia. The results were astonishing; dengue transmisison was reduced by 98%.

Since then, the strategy has been tested systematically in two sites in Brazil, including Rio de Janeiro, three cities in Colombia, Indonesia and Vietnam.

A study on the Indonesian trial that took place in Yogyakarta on the island of Java, was published in 2021 in the New England Journal of Medicine. Some 42-months post release, dispersion of the Wolbachia bacteria between March and December 2017 led to an 80% reduction in  dengue virus rates across 12 geographic clusters in the city of half a million people. 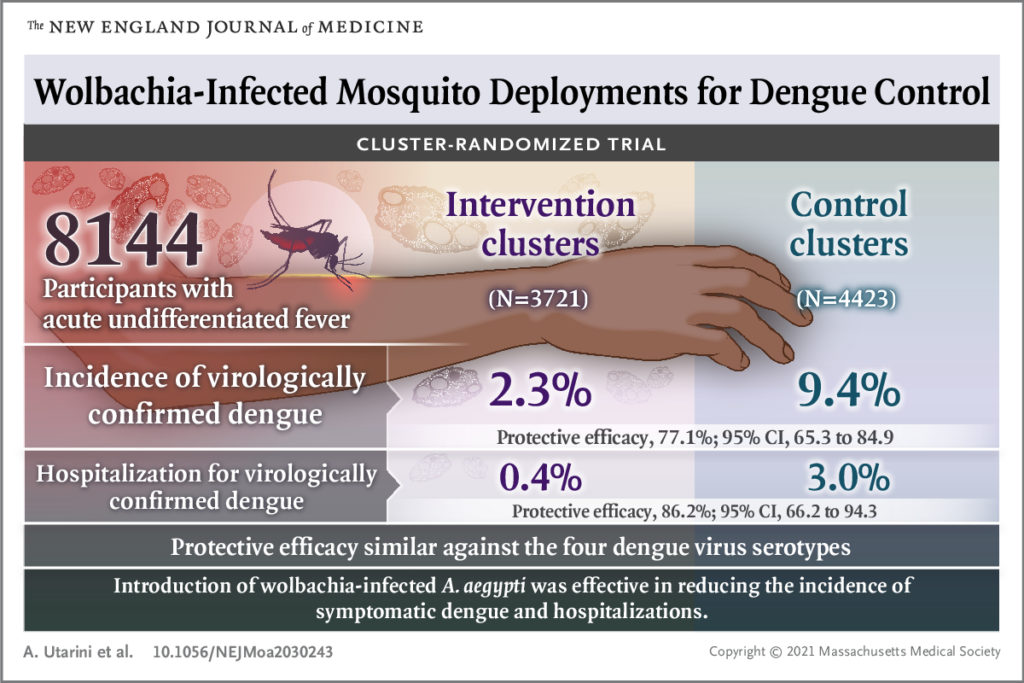 Speaking about the trials in the panel discussion, O’Neill also stressed the climate resilience of the strategy, which is a growing concern in a warming world.

“We found in some locations, extreme temperatures can be problematic and have been documented. Is that going to be a huge problem for the technology?” O’Neill asked.

“I don’t think so because it is not constant temperatures that cause the problem. It is the really blazing hot sun of around 45ºC that causes the problem. That’s usually when we get into more temperate areas…” he said, noting that in tropical areas where the dengue disease burden is the highest, the temperatures are more constant.

Also piloted in Colombia and Brazil

A pilot in three cities in Colombia, including Medellin, reduced dengue incidence by a whopping 94-97% 20-45 months post-release, Scott said in his presentation. Conversely, the trial in Rio de Janeiro has yielded the weakest results so far, with a 44% reduction in dengue incidence four years after the mosquitoes were released.

Even so, Arnaldo Correia de Medeiros, the Brazilian state undersecretary of health managing a pilot in Rio, stressed the government’s commitment to continue its investment in the Wolbachia method, on which it has already spent over $3 million.

The trials also required significant outreach – sensitizing communities where the Wolbachia-infected mosquitoes were released not to kill mosquitoes infected with the beneficial bacteria, Medeiros observed.

“It is important to educate the communities that they do not have to kill these mosquitoes because they are not the bad ones, they are the good ones,” Medeiros said, describing the meetings that were held with health workers and the public “so that they understand that  we are going to release the mosquitoes, and after that we are going to monitor, collect data and do the studies.”

In this dimension as well as others, the multi-country trials already have generated valuable insights critical to broader, real-world use of the strategy: “We need to understand how many lessons we have learnt when we think about [scaling up to] the world,” he said.

The technology has been on WHO’s radar for many years, and its Vector Control Advisory Group (VCAG) has been working closely with Dr O’Neill’s team for some time, Swaminathan said.

Only last month, WHO concluded a year-long  public consultation on the design of a “Target Product Profile” that would help standardize the widespread use of the bacteria.

Even so, WHO still needs more evidence on the strategy’s safety and efficacy to make a full WHO endorsement, in the form of a new WHO guideline for policymakers, said Swaminathan, at the panel event.

“Especially in a situation like this where the behaviour of a vector could vary from year to year, depending on the climatic conditions… there are many factors that might actually affect the results of an intervention study,” Swaminathan observed.

“It also has to be cost-effective, it has to be equitable; we look at many factors before the WHO Guideline group actually recommends (a health innovation).”

And there is no fixed timeline for reaching that endpoint, the chief scientist acknowledged, noting that WHO guidelines development can take years.

Drawing parallels between the agency’s actions during the Covid-19 pandemic where  emergency decisions were taken too rapidly, with insufficient evidence, and then later had to be corrected, Swaminathan added:

“Science is interesting, but it also needs to have a public health impact.”

Big up front investments can pay off

Widespread deployment of the technology would involve heavy up front costs, O’Neill acknowledged.

However, he underlined that  such investments can also offer large returns. “To implement technology is expensive at the front end and it pays back over time.”

For instance, while Brazil so far has spent $3 million deploying Wolbachia-infected Aedes mosquitoes, to date, the savings in averted social and medical costs have amounted to over $24 million, according to data collected by O’Neill’s team – even at the 44% rate of efficacy demonstrated locally.

Funding agencies and philanthropies need to look at such benefits-to-costs ratios when making decisions about investments – prioritising choices that will ultimately have the greatest  impact on the ground, Farrar added, echoing O’Neill’s remarks.

Meanwhile, effective public health action against dengue virus, which has become a kind of poster child disease in many developing cities, could set a precedent for many other important innovations that can benefit health, Farrar emphasized.

“Dengue is something which is a harbinger of bigger things that are changing the world like climate, urbanisation, trade and travel…I think to get dengue right will set a precedent for how we get a number of things right,” said Farrar.

Speaking more broadly, public health practitioners and decision-makers need to develop their own capacity to anticipate and take up new public health technologies in a rapidly changing world:

“Technology is coming and let’s think ahead of how we may use it in the communities. We shouldn’t be thinking of tomorrow but five, 10 and 15 years ahead. Because, at least some of it, we can predict,” Farrar said.

Also at GESDA: Other futuristic solutions

Along with the session on vector control, this year’s GESDA summit is featuring a number of other futuristic technologies that could positively impact the understanding of the human body and eventually disease control solutions and public health outcomes. Organoids, synthetic biology, artificial intelligence, data and computational science, brain miniaturisation and brain signal detection all have a place in this year’s agenda.