As fresh data reveals that tobacco products kill over 2 million people a year through coronary heart disease, tobacco control advocates are more determined than ever to protect the world against a product that kills half its users, not only from heart attacks but stroke, lung cancer and other diseases as well.

Comprehensive, but simple tobacco control policies, such as tobacco taxation, combined with blanket bans on smoking in indoor public places, could prevent up to 25% of strokes and heart attacks in some cases, reported a meta-analysis by the World Health Organization, World Heart Federation and Australia’s University of Newcastle just a week ahead of World Heart Day, observed this Tuesday.

And now more than ever, quitting tobacco use in the midst of the pandemic can help protect the population against severe coronavirus disease, said WHO’s Medical Officer for the Tobacco Free Initiative Kerstin Schotte, in an interview with Health Policy Watch. It could also free up space in hospitals, especially as the flu season begins.

Heart disease is, in fact, the leading cause of death worldwide, and in some cases, the main reason for admissions to hospitals and nursing homes – and in the past two decades, CHD deaths from tobacco have increased by 10,000 every year, warned the WHO last week.

“Smoke-free public spaces make sense not only to protect people from the dangers of secondhand smoke,” said Schotte. “They can also prevent young people from starting to smoke, because if kids go out at night to bars and nightclubs, and they can’t smoke, they’re really less likely to start.”

Most Countries Have ‘Long Way To Go’ On Tobacco Control

Eduardo Bianco, Chair of the World Heart Federation Tobacco Expert Group, also noted that stand-alone tobacco control policies are insufficient. A comprehensive approach is needed, including mass media campaigns, tobacco cessation programmes, as well as taxes on tobacco and smoke-free zones, among other measures, he said in an interview with Health Policy Watch.

“You cannot fight this huge and complicated problem with a single tobacco control measure,” warns Bianco. “You need the total combo to have a strong impact as they are not enough on their own.”

But comprehensive policy approaches on tobacco require high-level political commitment, which is often challenging to generate, he added.

Ministries Of Finance Need To Get On Board With Tobacco Control

“It is often difficult to implement all tobacco control policies in one go because ministries don’t always work well with each other,” said Bianco. “Ministries of health cannot tackle the tobacco epidemic on its own, as they must convince ministries of finance for tobacco taxation, or other ministries to approve mass media campaigns.”

And there is still “incredible interference” by the tobacco industry, with many tobacco giants like Japan Tobacco International (JTI) headquartered just a few kilometers from the WHO in Geneva, said Schotte.

“Big tobacco interferes with policymaking,” Schotte noted. “They scare governments, they overestimate the economic impact of business from tobacco, they make threats of illicit tobacco trade if taxes are increased, and continue to intimidate governments with litigation for implementing tobacco control measures.”

“From the rooftop of the WHO building, we can see the JTI building, one of our biggest enemies,” she added. “In our department [Tobacco Free Initiative], it’s a little bit different than in other departments. We don’t fight germs or viruses, but we fight a very powerful and resourceful tobacco industry.”

In fact, tobacco taxation makes economic sense because of the revenues taxes bring to governments. However, there is a lot of resistance, added Bianco, mainly due to unfounded claims by the tobacco industry that tobacco taxation could increase illicit trade. He also noted that, in the early 2000s, when Canada bowed to political pressure to reduce taxes on tobacco, it was a “terrible failure”. Not only did illicit trade remain unsolved, tobacco consumption also increased.

Countries around the world should take advantage of the historic WHO Framework Convention on Tobacco Control (WHO FCTC) to slash tobacco consumption and save lives, emphasized Schotte. The FCTC has been ratified by over 180 Member States since it was adopted almost two decades ago, and is hailed as one of the biggest successes of the WHO ever.

However, the FCTC is complex, and sometimes difficult to translate into policy action, especially for low- and middle-income countries with limited legal and regulatory capacity, said experts familiar with the FCTC.

They recommended the MPOWER policy package is a “good place to start” to implement the WHO’s FCTC on the ground, referring to six highly effective measures to reduce tobacco use as fast as possible.

On the bright side, over five billion people are covered by at least one MPOWER measure, according to last year’s report  – more than four times as many compared to 2007. And in 2019, two-thirds of countries had robust monitoring systems to track tobacco usage and the impact of tobacco control interventions, compared to only one third of countries in 2017.

Another barrier is the attitude of healthcare professionals themselves, including cardiologists that remain unaware or indifferent to tobacco as a driver in heart disease – and cardiology associations have largely avoided the tobacco issue.

“Except for the World Health Federation and the Interamerican Heart Foundation, most cardiologists have not stepped up to encourage their patients to stop using tobacco products,” he noted. “This is malpractice, and equivalent to a pulmonologist failing to encourage his patients to quit smoking.”

“Cardiologists are a highly influential group, and they should lead and support tobacco control coalitions and policies,” he said.

In addition, CHD is perceived less seriously among members of the public than other diseases like cancer, added Schotte. Many people imagine that CHD is a  “painless” and “ideal way” to die – even though people with heart disease face repeated hospital stays, many years of disability and a poor quality of life.

But only one year of abstinence can halve the risk of heart disease for a smoker, although up to 15 years are required to further reduce the risk of CHD to that of a non-smoker.

Based on such evidence, “All healthcare professionals should encourage their patients to quit smoking tobacco and avoid exposure to second-hand smoke,” she said. “Because there’s the amazing fact that if you quit smoking, one year later, your risk of heart disease is only half that of a smoker. So that is really something encouraging for people.” 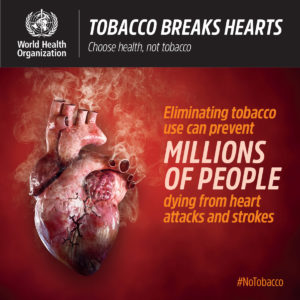 A whole-of-society approach is the “only way” to generate the necessary level of political commitment to tackle the tobacco epidemic, especially against the backdrop of tobacco industry interference, noted Bianco.

Tobacco control advocates can generate political commitment by setting up formal structures that support their efforts, he explained.

“Tobacco control advocates can set up formal structures to foster and sustain their efforts, such as advisory committees within ministries of health, special funds to help pay off costly litigations, or research centers to demonstrate the beneficial impact of policies,” said Bianco. “In the past two decades, all of those have helped Uruguay fight tobacco, even to this day.”

A few years later, the National Tobacco Control Alliance put in place a special advisory commission on tobacco control within the ministry of health, with representatives from academia and civil society.

The Alliance contacted the leading presidential candidate at the time, Tabaré Ramón Vázquez, who is an oncologist by training, to gain his support on the WHO FCTC that was being debated at the time. When Vázquez entered office in 2004, the advisory commission presented him with concrete policy advice on tobacco control.

A few years later in 2007, the national Epidemic Research Center was set up to generate evidence that Uruguay’s tobacco control policies were cost-effective and that they could save lives.

But in 2010, Philip Morris International (PMI) interfered through an international lawsuit, claiming the country’s tobacco policies violated the Bilateral Investment Treaty (BIT) between Uruguay and Switzerland.

Although Uruguay eventually won, without the support of Bloomberg Philanthropies with an initial $ 500,000 USD to kickstart the law case, Uruguay would have been unable to defend itself against PMI in court. The litigation cost $ 7 million in total, which PMI eventually paid back to Uruguay.

“These lawsuits cost millions and sometimes tens of millions of dollars, and we need to make sure that middle- and low-income countries can financially stand up against them through special funds, like the current Anti-Tobacco Trade Litigation Fund led by Bloomberg and Mill and Melinda Gates Foundation,” said Bianco.

Presidents As Scientists – Helpful But Insufficient

Although Uruguay’s former president Vázquez was “definitely” more receptive to tobacco control policies because of his training as an oncologist, having scientists at the helm of countries is insufficient to bring about health-related political change, emphasized Bianco.

He referred to Chile’s tobacco control policy, which stagnated under the leadership of Michelle Bachelet in 2006-2010 and 2014-2018, even though she is a medical doctor by training.

“Chile lacked the formal structures that Uruguay had to help generate evidence, trust, and high-level political commitment on tobacco control.”

“Having a scientist as president does not guarantee political will. What’s needed is a supportive environment and sustained action by civil society, academics, national medical associations, with the support of the international community and international treaties like the WHO’s FCTC.