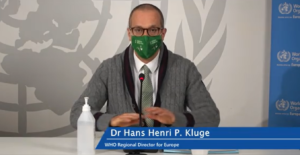 WHO called on European countries to step up their game to curb the highly contagious COVID-19 variants that are overtaking the region, already straining overstretched health systems.

Meanwhile some researchers were warning that the new virus variants could spell double trouble if the mutation first identified in South Africa, in particular, makes new vaccines just being rolled out less effective.

WHO European Regional Officials said that so far there was no evidence of that in the case of the UK virus variant that has spread to over 30 countries so far. However, the South African variant, which has a number of additional mutations, is raising far more concern, according to some scientists.

In any case, the surges of infections being seen now constitute an “alarming situation” warned Hans Kluge, head of WHO’s European Regional Office, on Thursday.

“We need to do more than we have done, to intensify the public health and social measures, … and flatten this steep vertical line.”

He also called on countries to step up “vigilance to identify any variants by first investigating unusually rapid transmission and unexpected disease presentation or severity.”

Kluge spoke as the region continues to face “extremely” high levels of transmission, with almost a third of the European population under strict lockdowns, and more countries set to announce further restrictions in the coming week.

Currently, about 25% of European member states are experiencing “very high incidence” and strained health systems, although lower reporting of infections during festivities may have underestimated the true extent of transmission, he added.

Infection trends are at least partially due to the new variant first seen in the UK, also known as “B.1.1.7”, which has potential to become the dominant SARS-CoV-2 lineage in the region.

So far, B.1.1.7 has been spotted in 22 European countries, said Kluge, and while it doesn’t trigger more severe COVID-19 disease than its predecessors, it appears to be at least 50% more infectious, according to a recent modelling study by the London School of Hygiene and Tropical Medicine.

Kluge also noted that in 2020, the WHO European region saw almost 600,000 deaths as a result of the more than 26 million COVID-19 cases reported. This amounts to a five fold increase in excess deaths from all causes as compared to 2019, he said.

WHO Says Vaccine Efficacy Should Hold Up To Variant Challenges; Others Not So Sure

Despite the chaos triggered by recent variants of the coronavirus, there is “promising evidence” that the vaccines developed so far will work, said Catherine Smallwood, Senior Health Emergency Officer for the European region, also speaking in Thursday’s press briefing.

“At the moment there is no evidence for any of the variants that have emerged that there would be any decreased effectiveness of the vaccine, but studies are still ongoing,” she said.

But it appeared that the WHO comments were referring largely to the variant first identified in the UK, known as B.1.1.7,. In that case, while the virus has mutations that make it more infectious, none have significantly altered the protein structure of the coronavirus’ characteristic “spike”, which is also the target of most vaccines.

The UK variant is currently more widespread – it has been reported in over 30 countries; in contrast variants that first were identified in South Africa have been identified in a handful of countries, including Japan, Norway and the United Kingdom, but it could be spreading further under the radar.

Why South African Variant Could Be More Dangerous

The emerging research is far less reassuring, however, when it comes to the variant first discovered in South Africa, known as 501Y.V2 (or B.1.351).

Some of these variants contain a mutation known as E484K, which changes the protein structure of the “spike” of SARS-Cov-2 – which may make it easier for the virus to elude the body’s antibody defenses.

Earlier this week, researchers at the University of Washington found that this mutation seemed to make it more resilient to attack by the very same “neutralizing antibodies” that are critical to fighting the disease  – and may be naturally produced or stimulated by a vaccine.

“The South African variant has a number of additional mutations including changes to some of the virus’ spike proteins, which are concerning,” said Simon Clarke, Associate Professor in Cellular Microbiology at the University of Reading in an expert review of the South African variant, published in Science Media Centre.

“They cause more extensive alteration of the spike protein than the changes in the [British] Kent variant and may make the virus less susceptible to the immune response triggered by the vaccines.“

In a pre-print study mapping antibody responses among eleven patients, the ability of neutralizing antibodies to bind to the virus was reduced by a factor of ten among some of those people infected with the SARS-CoV-2 virus bearing the E484K mutation.

Those same neutralizing antibodies are critical to the immune response triggered by vaccines.

“This does not mean that the existing COVID-19 vaccines will not work at all, just that the antibodies induced by the current vaccines may not bind and neutralise the South African variant as well as it would the other circulating viruses – including the UK variant,” said Julian Tang from the University of Leicester.

But biggest priority is vaccinate! Despite above, I'm confident current vaccines will be useful for quite a while. Reasons: (a) even worst mutations (ie, E484) only erode neut activity of some sera, don't eliminate it for any, (b) current vaccines elicit strong immunity… (20/n)

Vaccines should still be effective for “quite a while”, even if they turn out to be less effective than previously assumed, emphasized Jesse Bloom, the head of the Seattle-based laboratory that published the study. He said that it could take “years” for current vaccines to become ineffective.

Just on Thursday, a study by Pfizer and researchers from the University of Texas Medical Branch revealed that its mRNA vaccine effectively neutralized a virus variant with the N501Y mutation, offering some relief that Pfizer’s vaccine is resilient against an important and increasingly common mutation. The study has not been peer-reviewed yet.

“This is welcome information”, said the World Health Oranization’s director for immunization, vaccines and biologicals Kate O’Brien at a press briefing on Friday. But she said that understanding of the variants remains “dynamic” and the most “powerful information” will be “evidence from efficacy trials that are being conducted in areas where the variants are circulating.”

The N501Y mutation is among several key mutations that have given the British and South African variants a highly infectious edge. Similarly to Bloom’s study, researchers extracted blood samples from two dozen volunteers immunised with the Pfizer-BioNTech vaccine to test how well their antibodies held up against the N501Y mutation.

While the results were welcomed as “very encouraging news”, the study authors acknowledged they had only tested the effect of one mutation in isolation – rather than the full set of mutations in either of the variants.  Yet, unlike the Bloom lab, Pfizer’s team did not investigate whether the alarming E484K mutation in the South African strain reduced antibody neutralization.

Also, the mutation that was tested was created in a laboratory, and not naturally derived, the authors said in a paper on the preprint server Bioxriv. “A limitation of this finding is that the Y501 virus [variant studied] does not include the full set of spike mutations found on the rapidly spreading strains in the UK or South Africa,” admitted the study authors.

The preprint study covers just one of the 16 virus mutations that Pfizer has investigated so far, according to a top Pfizer scientist, interviewed by Reuters on Friday.  However that work has still not gone far enough to explore the most dangerous mutations that the variants are displaying, said Lawrence S. Young, a virologist from England’s University of Warwick.

Other changes which might affect infectivity have not been examined

“For both [British and South African] virus variants there are other changes which might affect infectivity and these have not been examined. This is particularly a concern with the South African variant,” noted Young, referring to the E484K mutation, in an expert reaction published by the Science Media Centre.

“These changes are very likely to influence the infectiousness of this South African variant and may also impact its ability to be blocked by antibodies,” he said. Additionally, he noted that the blood samples examined in the Pfizer study were those of volunteers who had quickly received the second dose of the vaccine – within three weeks of the first dose, as per Pfizer’s protocol.

This, he said, “highlights the importance” of quickly receiving the second dose.

His comment came on the heels of the United Kingdom’s controversial move to delay the second dose by as much as 12 weeks – or six weeks longer than the WHO’s recommendations – in a desperate attempt to expand vaccine efforts. Some scientists have warned that delaying the second dose of the vaccine could in fact promote more mutations, lead to poorer immunity, or even exacerbate vaccine hesitancy.

Still, Pfizer hopes to gather more comprehensive data on the full set of mutations in the British and South African variants “within weeks”.

If any of these mutations turn out to reduce vaccine efficacy, the Pfizer/BioNTech and Moderna vaccines could be “updated” in as little as six weeks, noted experts.

However, if an updated mRNA vaccine ends up being developed, its soaring price and complex cold-chain requirements suggest that low- and middle-income countries would wait in the queue for a long time before getting their hands on it, in a similar vein to what is happening now.