CAPE TOWN – As South Africa reported its highest COVID-19 cases ever this week – over 20,000 in one day – Health Minister Dr Zweli Mkhize announced that the country had procured 1.5 million doses of the AstraZeneca-Oxford vaccine and would start vaccinating health workers by the end of this month.

The South African government has bought the vaccines directly from the Serum Insitute of India, with one million doses arriving this month and the balance being delivered in February.

The minister said that an estimated 1.25 million health workers are working in both public and private health, and these would get the vaccine first. However, the AstraZeneca vaccine requires two doses so it appears that all health workers will receive one initial dose.

Three doctors died of COVID-19 this week in KwaZulu-Natal, one of the country’s nine provinces worst affected by the pandemic. The SA Medical Association (SAMA), which represents health professionals, says that there is a “dire shortage” of medical staff, oxygen and personal protective equipment (PPE) in the province.

The Western Cape province, which has the highest infection rate per 100,000 (3326), has reported that over 7200 health workers had been infected since March, over 1000 are currently infected and more than 240 have died.

“As recently as yesterday, our teams from the National Department of Health and the South African Health Products Regulatory Authority (SAHPRA) were fine-tuning and aligning all the regulations processes to ensure that there are no unnecessary delays or regulatory impediments to activate this rollout,” Dr Mkhize told the South African Parliament’s Health Portfolio Committee.

“We are happy that the SII/ AstraZeneca vaccine has already been approved by various regulators and is being rolled out in other countries. Therefore, as part of expediting the regulatory process, SAHPRA is applying reliance on that regulatory work,” said Mkhize. 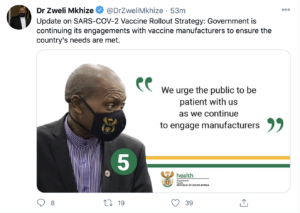 Just last week, the United Kingdom approved the AstraZeneca vaccine, which was co-developed with Oxford University – followed by Indian approval of the vaccine this week. Unlike the Pfizer and Moderna vaccines, based on cutting edge mRNA technology which requires ultra-cold storage, the AstraZeneca vaccine can be stored in a refrigerator – and while it is also to soon be deployed in Great Britain, it has also been considered one of the best vaccine candidates for large-scale rollout in countries with less cold-chain capacity.

The announcement came as South Africa battled the highly infectious “501.V2” variant, which, according to preliminary research,  could reduce vaccine efficacy as a result of three mutations in the so-called “receptor-binding domain” of the viral spike protein – including N501Y, K417N and E484K.

Although South Africa’s rate of new infections is still far lower than those being seen in the UK, Europe or the US, rates here are the highest on the continent and they have risen sharply over the past month. 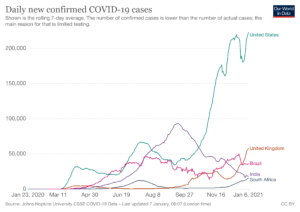 Mkhize said that Phase 2 of the country’s vaccination rollout “will be the essential workers such as teachers, police, the military and other people who are working in settings where they are serving communities and risk exposure to the virus because of their services to the community”.

On Sunday, the Health Department also said that South Africans over the age of 60 as well as those living with other chronic medical conditions would be targeted in Phase 2 of the rollout – and that 16 million doses would be needed for those groups.

South Africa is also a member of the WHO co-sponsored COVAX vaccine procurement facility  – which also aims to distribute at least 2 billion doses this year to countries that have joined. COVAX vaccine doses are expected to arrive by April, but as per the distribution plan, those would only cover 10% of South Africa’s population.

As a middle-income country, South Africa also has to buy the COVAX vaccine – while some 92 low-income countries will be able to get donor support for their allocations.

South Africa is also in bilateral discussions with a range of pharmaceutical companies with the aim of getting vaccines for the rest of the population – around 40 million people – but declined to name these or provide any details.

WHO Warns Against Bilateral Agreements Outside COVAX

However, WHO Director-General Dr Tedros Adhanom Ghebreyesus appealed to member countries not to seek deals outside of COVAX when he addressed them at a briefing on the pandemic today.

“Forty two countries have started vaccinating their high-risk populations with various COVID-19 vaccines. Of the 42, 36 are high-income and six are upper middle-income countries,” said Dr Tedros.

“This is clearly a problem and this problem is getting worse because some countries are pursuing new deals outside of COVAX offering higher prices. This compromises our collective commitment to equitable access.”

He added that 190 countries and economies had committed to COVAX and the WHO expected all stakeholders to ensure vaccines are distributed “as swiftly and equitably as possible to all countries”.

“History will not judge us kindly if we fail the low- and middle-income countries in their hour of need and sharing is in the best interest of each and every country.  We can only recover faster as a global community by sharing.”

Tedros said that wealthier member states could improve vaccine access for low and middle-income countries by subscribing to the new COVAX dose-sharing principles with the goal of having the first donations by the end of January or early-February.

“I challenge each and every one of us to do everything possible to reduce cases as quickly as possible while simultaneously increasing production and rollout of vaccines,” urged Tedros.