Rapid diagnostic tests (RDTs) could play a critical role in decentralising testing and reaching remote communities as WHO launches an Africa roll-out, but a recent study has found that only two of the six RDTs making it to the final round of testing met WHO accuracy standards.

RDTs test for proteins produced by the SARS-CoV-2 virus, collected using nasopharyngeal or oropharyngeal swabs. Typically, they are more reliable in symptomatic patients, with a high viral load, especially in their upper respiratory tract, and their ease-of-use makes them preferable to other means of testing in critical situations.

The study, led by the Foundation for Innovative New Diagnostics (FIND), evaluated the performance and ease-of-use of six commercially available RDTs in people presumed to have COVID-19, in testing centres across Brazil, Germany and the UK. The 2,400 adult participants enrolled in the study were identified as at risk for infection according to their local department of public health. Patients were excluded if they had previously been diagnosed with SARS-CoV-2.

The results, which were released at The Union World Conference on Lung Health and also pre-published on medRxiv.org, were then compared to the accuracy requirements approved by WHO. According to this profile, RDTs must have a minimum sensitivity of 70% and at least 97% specificity, but only two tests met the proposed minimal requirement for both categories.

“These tests are likely to be useful in settings where the COVID-19 positivity rates are higher to minimize the number of false positive tests that are detected,” said Jilian Sacks, an author on the study. Because data suggests RDTs have improved accuracy in people with higher viral loads, this would be a good way, she added, “to be sure you’re diagnosing someone with COVID-19, and then take appropriate health measures.”

On a more positive note, Sacks said, the blood tests being rolled out now to test antibody levels in the general population seem more reliable. The FIND study evaluating those tests, found that  of the 15 enzyme-linked immunosorbent assays (ELISA), 11 met performance targets. ELISAs detect antibodies 14 days or more after symptoms appear, with a performance time of up to two hours.

This makes such tests an excellent way to track infection and immunity in large groups of people, but the sophisticated equipment required makes them inefficient for use in the rapid diagnosis of people who are actually ill and infectious.

Effective control of the virus is largely dependent on the quick identification of infected individuals, followed by a period of isolation and clinical support, if needed. The current gold standard of testing – polymerase chain reaction (PCR) tests – can only be conducted in a laboratory as they detect nucleic acid from SARS-CoV-2. This can leave people waiting anywhere from 48 hours to more than 10 days for results, impeding rapid identification and isolation efforts.

It is believed that RDTs, with their turnaround time of up to half an hour, play a critical role in cutting this delay and limiting the transmission of COVID-19. The cheap cost and ease-of-use mean they are being considered as an effective method of testing alongside current PCR tests. 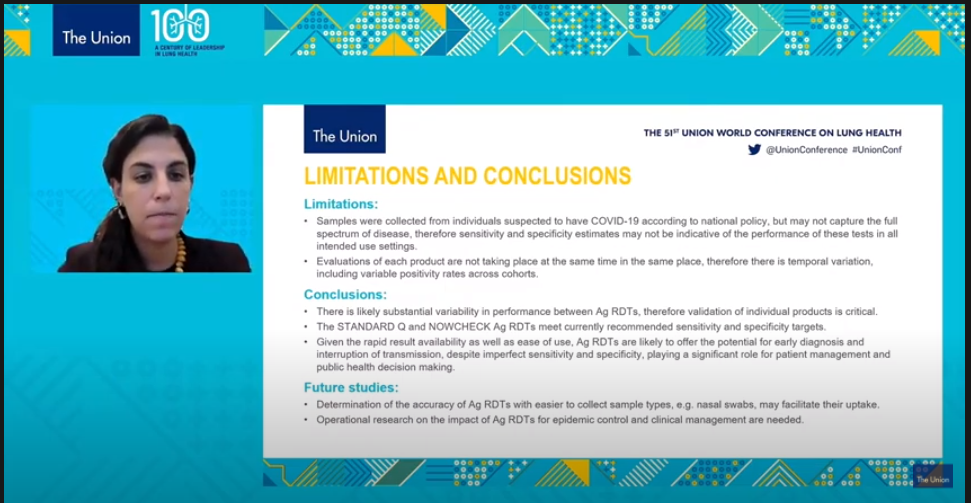 Rapid testing could turn the tide in Africa

Standard Q, the best performing RDT tested by FIND, is one of two rapid tests being rolled out across Africa by WHO, in the hope of increasing testing capacity.

Globally, 120 million RDTs are being made available to low- and middle-income countries through the ACT-Accelerator, a coalition also including UNITAID, the Global Fund, and FIND. The coalition, together with the Africa Centres for Disease Control will distribute the tests in 20 African countries. WHO is also supporting countries to procure the tests through the supply portal set up by the United Nations.

Many African countries have struggled to test in numbers sufficient to control the transmission of coronavirus. In the last month, only 12 countries reached the key threshold of 10 tests per 10,000 people per week. Many are also falling short when compared to countries of a similar size in different regions. Nigeria is testing 11 times less than Brazil, with Senegal testing less than 14 times that of the Netherlands.

“Most African countries are focused on testing travellers, patients or contacts, and we estimate that a significant number of cases are still missed,” said Dr Matshidiso Moeti, WHO Regional Director for Africa at a press conference on Thursday. “With rapid testing, authorities can stay a step ahead of COVID-19 by scaling up active case finding in challenging environments, such as crowded urban neighbourhoods and communities in the hinterlands.”

WHO recommends RDTs for use in outbreaks in hard-to-reach areas with no access to the city-constricted PCR testing sites, and in areas with widespread community transmission.

120 million RDTs are being made available to low- and middle-income countries under the umbrella coalition ACT-Accelerator. Institutions and organisations, including FIND, will distribute these tests in 10 African countries.

The Standard Q RDT will roll-out alongside the Panbio COVID-19 Antigen Rapid Test Device, manufactured by Abbott. It is important to note that the Panbio RDT was not commercially available when FIND conducted their study,  Sacks said. She said an independent study of that RDT is now underway.