The tobacco industry strongly influences policy-making in Japan, Jordan, Egypt and Bangladesh. Conversely, the United Kingdom, Uganda, and Iran emerge as countries with the least industry meddling, according to a first-ever report to systematically assess levels of industry influence in countries, by the watchdog group STOP (Stopping Tobacco Organizations and Products).

“This report shows that the tobacco industry is as underhanded as ever. It may claim that it is changing in public, but behind the scenes it is fighting tooth and nail to sabotage effective regulation. Governments must stand firm and fulfill their mandate to protect public health,” said Mary Assunta, lead author of the report, head of Global Research and Advocacy at GGTC and a partner in STOP, which is funded by Bloomberg Philanthropies.

Over 8 million deaths annually are caused by tobacco use, including direct and second-hand smoke exposure. About 80% of world’s 1.1 billion smokers live in low and middle-income countries, where the burden of tobacco-related illness and death is heaviest, according to the World Health Organization. Tobacco industry influence has been cited by governments as a major barrier to passing strong tobacco control measures. 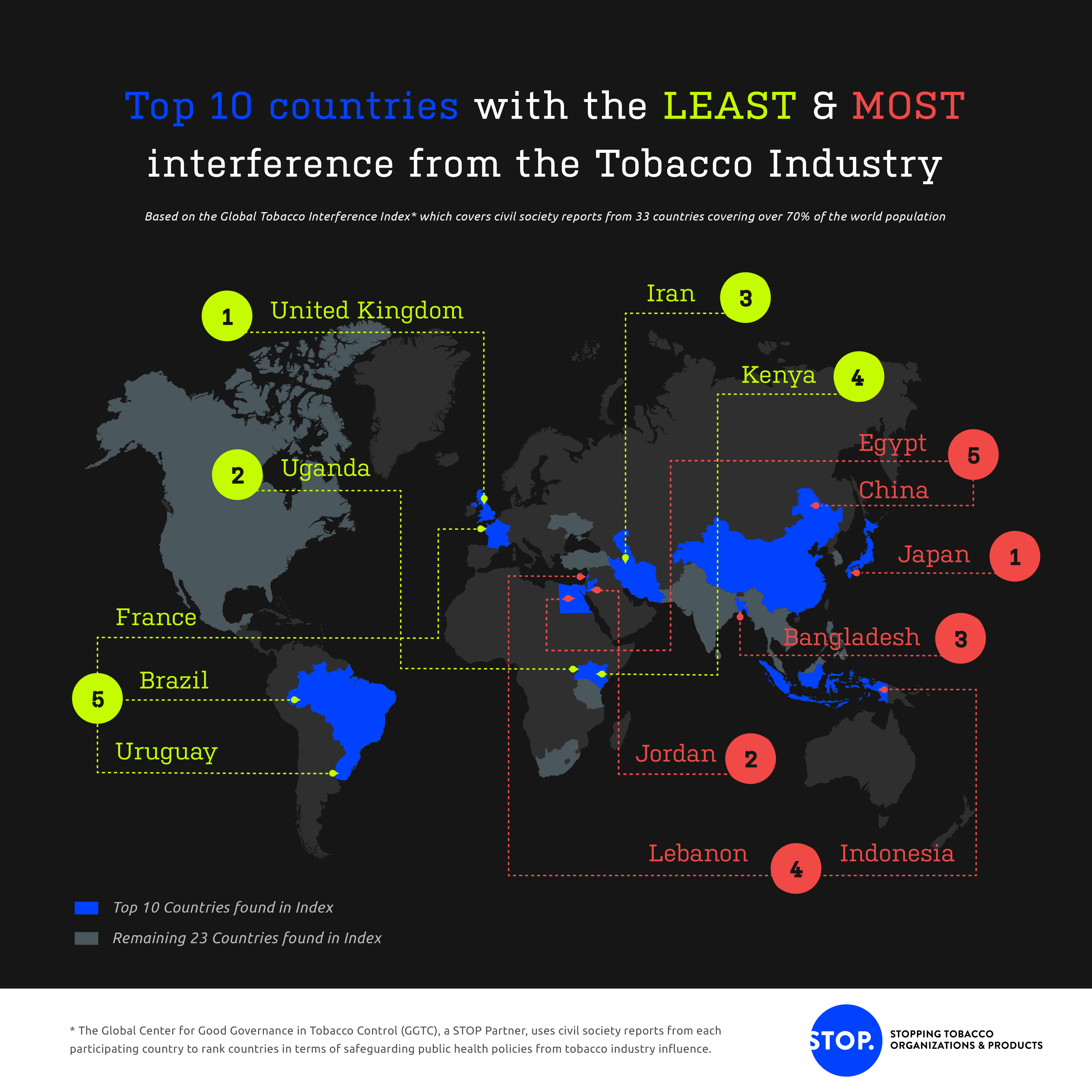 The report highlighted a number of alarming trends in overall interference and interference in policy-making. Key findings include:

On an optimistic note, the report finds that any country can independently shape tobacco policies if sufficient political will exists. The top three countries that have been the most successful in resisting industry influence – the UK, Uganda, and Iran – are economically, politically and culturally diverse.

In terms of other lessons learned, the report finds that countries fared significantly better when politicians and policymakers were more open about government  dealings with the industry, including recorded interactions and political donations. Political contributions and gifts from the tobacco industry are banned in Brazil, Canada, France, Iran, Myanmar, Turkey, U.K., Uganda and Uruguay. Among the countries surveyed, transparency on political contributions from the tobacco industry is required only in Kenya and the U.S.

Still, even the countries that have implemented measures to exclude the tobacco industry from policy-making processes must remain watchful, especially as the industry shifts it’s focus from health to non-health departments of government, such as development, agriculture or finance.

Sandra Mullin, senior vice president at Vital Strategies and board member of STOP, says, “Our report suggests that even these countries need to be vigilant against new industry tactics.