Bold decisions are required to strengthen the World Health Organization and equip it with authority and resources it needs to address glaring shortcomings in pandemic preparedness and response, the 74th World Health Assembly was told on Tuesday.

Recommendations emerging out of a report by the Independent Oversight and Advisory Committee (IOAC) for the WHO Health Emergencies Programme were presented to the Assembly on Tuesday.  While the committee was supposed to focus on the WHO Emergencies response, as such, its criticisms of failings were more focused upon the insufficient lack of global political will to fight the pandemic, a lack of global solidarity and planning.

“Overall, IOAC is satisfied with the achievements made, and impressed by the [WHO] Secretariat as continuous efforts are made to implement the IOAC recommendations,” said IOAC chair Felicity Harvey in her presentation to member states. “And I would also like to recognize that Dr Tedros is committed to implementing our recommendations – and indeed some recommendations issued in this report are already being implemented as we speak. 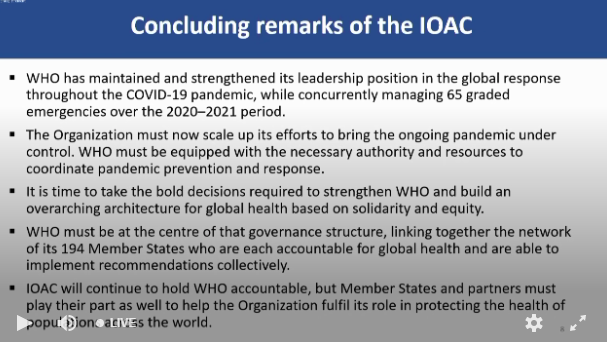 Those recommendations include more intensive work with Member States “to improve and clarify risk assessments, corresponding alerts, and empower IHR national focal points to take informed action”. In addition, she said the IOAC report found that WHO should review existing tools for “national and international preparedness,” as well as the use of travel restrictions in the pandemic context.

Other recommendations include strengthening of core WHO technical expertise and revising staffing and related grading processes, including clearer roles and responsibilities for the director-general, regional directors and other senior staff, with respect to emergencies.

However Harvey said the IOAC was also calling upon member states to review whether WHO had the strategic capacity to support country pandemic preparedness and if it had sufficient funding to lead multidimensional and large-scale emergencies like the COVID-19 pandemic.

“The world looks to WHO for guidance, but to serve that purpose WHO must be equipped with the necessary authority and resources to coordinate pandemic prevention and response. “

“IOAC will continue to hold WHO accountable, but Member States and partners must play their part as well, to help the Organization fulfil its role in protecting the health of populations across the world,” Harvey said. “Global health is truly a shared responsibility.” 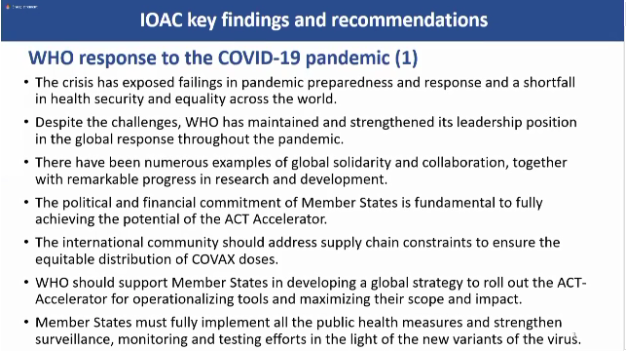 Regarding the recent allegations of sexual harrassment and exploitation among WHO staff in the Democratic Republic of the Congo, the IOAC said it was concerned about the fact-finding process’s slow progress.

Two media recent reports have detailed allegations by women who said male aid workers responding to the Ebola crisis in the eastern DRC offered them jobs in exchange for sex.  In one report, a woman working as a nurse’s aide in northeastern Congo alleged she was offered a job from a WHO doctor at double her salary in exchange for sex.

“We urge WHO to immediately implement preventive and response measures in areas that are potentially high-risk for sexual exploitation and abuse. The IOAC recommends that WHO conduct a cross-Organization review of the current tools, structures, processes and coordination mechanisms to prevent, mitigate and manage all potential risks linked to emergency operations for both staff and communities,” Harvey said.

‘WHO Strengthened Its Leadership Position’

Though the report exposes failings in pandemic preparedness and response, Harvey said the commitee found numerous examples of “global solidarity and collaboration, together with remarkable progress in research and development”.

“Despite the challenges faced, the report concludes that WHO has maintained, and indeed strengthened, its leadership position in the global response throughout the pandemic,” she said.

The IOAC also voiced support for WHO Director-General Dr Tedros Ghebreyesus, the public face of WHO efforts since the SARS-CoV-2 virus emerged in the Chinese city of Wuhan in late 2019. It said it was “deeply concerned by the high level of toxicity and incivility on social media against WHO and its personnel”.

“The Committee strongly condemns personal attacks against the Director-General and WHO staff members, and recommends that WHO build capacity to deploy proactive countermeasures against misinformation and social media attacks, and further invests in risk communication as an essential component of epidemic management.”

The report is one of three documents critically reviewing the global pandemic response – and the document most focused on WHO’s own emergency performance. The other two reviews were undertaken by the Independent Panel for Pandemic Preparedness and Response (IPPR) and the International Health Regulations Review Committee (IHRC). The Independent Panel report focused broadly on the failures of the global community and member states, although also with reference to WHO’s strengths and shortcomings.  The third report focused on the limitations of the current International Health Regulations, which comprise the legal framework governing emergency response.

A number of member states welcomed the recommendations by the three reports and called for their immediate implementation.

South Africa said “business as usual can’t be an option anymore.” Meanwhile, the United States said it was ready to work with all WHA member states to translate recommendations into concrete change and tangible improvements.

Mexico voiced its concern over the speed at which decisions are being implemented. Russia was also critical, saying not all conclusions and recommendations made by the commissions were “fully in line with an accurate analysis of the COVID-19 pandemic”.

Portugal, speaking on behalf of the European Union and its member states, urged the WHO to facilitate discussions among experts on all recommendations made by different commissions and report back to member states.