South Africa’s Cabinet has approved the signing of the African Union treaty establishing the African Medicines Agency (AMA) and submitted it to Parliament for ratification, according to a government statement on 23 September.

“Cabinet approved the signing of the Treaty for the Establishment of the AMA and its submission to Parliament for ratification,” the statement reported.

“The signing and ratifying of this treaty will advance South Africa’s global and continental commitment toward strengthening the continental regulatory system on its health products,” the statement added.

If the South African Parliament ratifies the treaty, South Africa will be the 34th country to swing behind the AMA since the treaty took force in November 2021 with the ratification of the first 15 African countries to get behind the initiative.

Zimbabwean public health specialist Dr Nokuthula Kitikiti, who is of South African origins, described the development as “great news”.  She noted that South Africa’s move holds special relevance since its national regulatory agency is one of the few in Africa that has achieved the milestone of being designated as “maturity level 3” (ML3) by WHO.

“Smaller and less developed agencies can benefit from their participation in the AMA by building capacity through joint reviews and understanding the process at the South African Health Products Regulatory Authority (SAHPRA) and other ML3 agencies,” she told Health Policy Watch.

As a key regional manufacturing centre for vaccines and the site of the World Health Organization’s (WHO) mRNA vaccine hub, Kitikiti said it is is vital for South Africa to be involved in AMA as Africa builds its vaccine manufacturing capabilities.

“South Africa also has a vibrant patient and civil society community that I am sure will enrich the continent-wide discussions on how to involve the public and patients in a more meaningful way in health products regulations as the AMA takes shape. We are still very nascent in this compared to other regions. After all, we are all doing this to make medicines safer and more accessible for patients,” she added.

South Africa has been one of the big country holdouts on treaty ratification – along with Nigeria in West Africa and Kenya in East Africa.

This is despite pledges from South Africa’s political leadership that it supported the AMA dating back as far as 2017 when the AMA’s first stakeholder consultative meeting was held at the South African historical city of Johannesburg.

Senior South African government officials have repeatedly stated that they had no hesitation regarding being a part of the AMA. In February 2022, South Africa’s Health Minister, Dr Joe Phaahla affirmed the country’s support for the continental-wide medicines regulatory authority, and said the government would sign the treaty.

“There is no, in principle, hesitation. It’s more operational in terms of making sure that we do sign the treaty on the AMA,” the minister said, during a tour by WHO’s Director General of Cape Town’s new mRNA vaccine R&D hub. 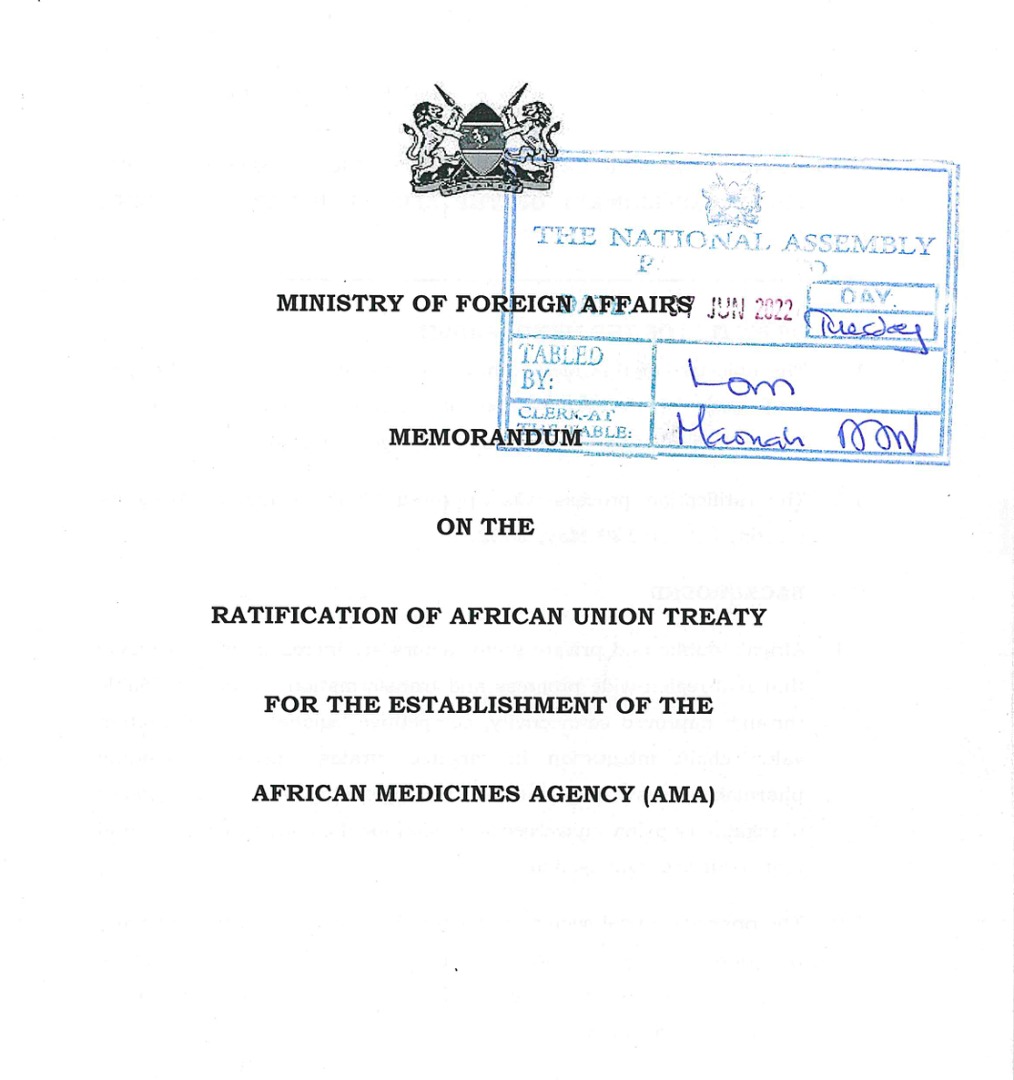 Even so, ratification of the AMA treaty by the South African parliament remains a critical step before the deal is sealed. Following that, the treaty ratification then needs to be formally deposited with the African Union.

Kenya’s parliament has remained stalled on the treaty ratification already for the past five months ever since the cabinet signalled its approval of the treaty in May.

In Kenya, the National Assembly officially received a memorandum proposing ratification of the AMA in June 2022 but nearly four months later, parliamentarians are yet to vote on the treaty.

According to the memorandum that presented the treaty to the parliament, the signing and ratification of the treaty by Kenya will “demonstrate Kenya’s commitment to the continent’s collective action to the improved regulation of medicines, medical products and technologies… Ratification will bring about positive consequences both to the country and States Members.”

However, Kenya held national elections in August, leading to a Supreme Court challenge of the election of President William Ruto, whose election was ultimately upheld. The ensuing political uproar, however, likely also delayed the parliamentary move.

The treaty has long been a topic of discussion in regional African political forums, including at events such as the Commonwealth Speakers and Presiding Officers’ Conference held in November 2021 in Rwanda and attended by both Kenya and South Africa.

At that conference, the leader of South Africa’s delegation Amos Masondo, urged parliamentarians across the continent to “accelerate the ratification” of the treaty.

“Establishment of an AMA [will] help regulate products; help invest more in research and development, [and help countries] to build their own vaccine production while fighting to address vaccine nationalism that disadvantages the African continent,” Masondo said.

Nigeria another holdout – could be a costly delay

In West Africa, meanwhile, Nigerian global health equity advocate Ifeanyi Nsofor told Health Policy Watch the continual delay in the treaty’s ratification and full implementation could create confusion in the pharmaceutical landscape on the continent as countries that have already signed and submitted the treaty may have a different policy direction from those that haven’t.

He added that the delay could also have impacts on plans to scale up vaccine manufacturing on the continent.

“Of importance is the way it could delay plans to manufacture vaccines in Africa. Infectious diseases do not care about politics. Ultimately, Africans would suffer from this reluctance. It’s a matter of life and death,” Nsofor told Health Policy Watch.

In spite of holdouts, the number of countries in Africa that have swung behind the treaty has continued to grow – and now constitutes a two-thirds majority of the African Union’s member states.

On 1 September, the Kingdom of Lesotho became the latest Member State to ratify and deposit the AMA Treaty instrument.

Congratulations to the Kingdom of #Lesotho for becoming the 23rd Member State to deposit the instrument for the Treaty establishing the African Medicines Agency #AMA this morning @_AfricanUnion
#RegulationsForASaferAfrica @AmbSamate @MichelSidibe pic.twitter.com/WY57D2HH3x

Prior to that, the Republic of Mozambique also signed the treaty on 8 August but it has yet to ratify the treaty and deposit the ratified instrument with the African Union as per the formal required procedure.

Regarding the holdouts, the official AU line continues to be “countries have different ratification processes at the national level … However, the AU Commission continues with advocacy efforts to encourage more member states to ratify the Treaty.”

At the same time, AU Special Envoy to the AMA, Michel Sidibé, and the AMA Treaty Alliance (AMATA) are also engaging patient groups, industry, academia and civil society to support the AMA treaty and its operationalization.

Sidibé, who also is the former Executive Director of the Joint United Nations Programme on HIV/AIDS (UNAIDS), described the success of this approach as reliant on “partnerships with stakeholders across the health ecosystem”.

“It is very important to not lose momentum…We don’t have another way to do it except making sure that we maintain and sustain our advocacy — and we mobilize political leaders,” said Sidibé in one recent Health Policy Watch interview.

AMA advocates have continuously underlined the knock-on benefits the new regulatory agency would have in terms of not only harmonising the approval of new medicines – but also thereby ensuring more access to affordable quality medicines.

This, in turn, can help fight worrisome trends like antimicrobial resistance (AMR) – which the continent has little capacity to track or tackle right now, according to one recent study of 14 countries.

According to a new African Union Framework for AMR Control, the nascent AMA will promote a common scheme for prohibiting the sale of non-standard antimicrobials, whose use can foster drug resistance, backed by post-marketing surveillance.

In the context of the framework, the AMA will contribute to strengthening laboratories for drug quality control and promote the education of pharmacists in identifying sub-standard or falsified drugs, using innovative tests to measure drug quality, while also encouraging policies that promote the availability of genuine, safe and effective products at competitive prices.

The Framework also promotes collaboration with governmental and non-governmental partners (including community groups) to increase awareness amongst not only clinicians and pharmacists but also veterinarians and animal and crop producers about substandard and falsified antimicrobials.

For full coverage on the development of the African Medicines Agency, see our AMA Countdown Page here:

-Kerry Cullinan contributed to the reporting on this story.