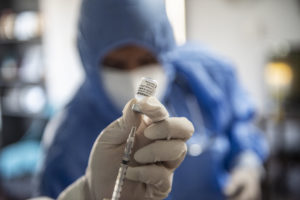 Two jabs of the Pfizer-BioNTech vaccine are 90% effective against COVID-19 hospitalizations for all variants including Delta, for at least 6 months, confirmed a new study published by The Lancet.

“Our study confirms that vaccines are a critical tool for controlling the pandemic and remain highly effective in preventing severe disease and hospitalization, including from the delta and other variants of concern. Protection against infection does decline in the months following a second dose,” said lead author of the study Dr Sara Tartof, of Kaiser Permanente.

The study analyzed 3,436,957 electronic health records from the Kaiser Permanente Southern California (KPSC) health system between 4 December 2020 and 8 August 2021 to assess the effectiveness of the Pfizer vaccine against COVID-19 infections and related hospitalizations.

In addition, the study also found that effectiveness against all SARS-CoV-2 infections declined over the study period, falling from 88% within one month after receiving two doses to 47% after six months, underscoring the importance of improving vaccination rates worldwide. Researchers did not observe a difference in waning between variants.

While this does provide evidence towards waning immunity against COVID-19, the CDC has called for additional research to determine which groups should be prioritized to receive booster shots.

“In line with the recent FDA [3] and CDC recommendations [4], considerations for booster shots should take global COVID-19 vaccine supply into account as people in many countries around the world have not yet received a primary vaccination series,” said Tartof.

Vaccine equity and booster shots have prompted increasing debate in recent weeks, with WHO calling for a global moratorium on COVID-19 boosters to be extended until the end of the year, and global health advocates protesting “vaccine apartheid” outside the UN during the General Assembly last month.

US and Israeli studies find similar reductions in immunity

Other findings from the US Centers for Disease Control (CDC) and the Israeli Ministry of Health had also found reductions of immunity from the Pfizer vaccine after six months.

The Israeli findings reported that people over age 60 who received a third dose of the Pfizer vaccine were five times less likely to become severely ill if they had their first shot at least five months earlier.

These results in particular were regarded as a critical factor in the recommendation from the US Food and Drug Administration (FDA) to amend its emergency use authorization (EUA) last month for the Pfizer vaccine.