Islamabad, Pakistan: Even as Pakistan faced an intense third wave of COVID-19,  health authorities ‘silently’ suspended vaccination registration for its frontline Healthcare Workers (HCWs) for more than a month – ostensibly because of low registration and concerns about fake registrations.

But following queries by Health Policy Watch on Monday, Ministry of Health officials suddenly did an about-face, announcing Wednesday that vaccinations of healthcare workers would resume again right away –  with additional checks to ensure that those getting the jabs are bonafide health workers.

Following Health Policy Watch queries to the Special Assistant to the Prime Minister (SAPM) on NHS, Dr. Faisal Sultan took to Twitter to announce that the vaccination registration of health workers had been reopened – but only until April 30.

To give opportunity to all remaining healthcare workers to get vaccinated, registration portal (https://t.co/aI3eDzlNUo) has been re-opened till 30 April. Visit portal and register by following instructions.

“To give opportunity to all remaining healthcare workers to get vaccinated, the registration portal (http://Covid.gov.pk/vaccine) has been re-opened till 30 April. Visit portal and register by following instructions”, he said. A check of the portal, however, indicated only that health care workers would be contacted by SMS.

As news of the de-facto suspension of registration first began circulating this week, doctors rights groups were fuming, saying that healthcare workers’ lives are being put at risk, and one senior medical expert going so far as to call it a “crime” – in an interview with Health Policy Watch.

The Pakistan Medical Association (PMA) wrote to the country’s National Command and Operations Center (NCOC) head, Minister Asad Umer, calling upon him to immediately resume the registration of healthcare workers’ for vaccines – along with older people and those with pre-conditions who continue to sign up for the free jabs.

Official data obtained by Health Policy Watch shows that about 57 % of the country’s health workforce, or some 367,000 people out of a total of 640,000, have been vaccinated so far in the  vaccine drive that began in early February of this year.

The number of new COVID-19 cases in Pakistan has surged to the highest point ever, with some 5,499 new cases being reported in the past 24 hour and nearly 4500 people in critical condition. More than 100 deaths were being reported daily, leading to 1,527 deaths since 5 April.

Prioritise the Vaccination of HCWs

In a letter addressed to Umar, obtained by Health Policy Watch, the PMA Secretary General Dr Qaiser Sajjad, pleaded with the National Command Operations Center (NCOC), a body formed to handle the pandemic in the country, to prioritise the vaccination of health workers.

In the letter, Sajjad said that even the page for priority registration for doctors had been removed from the government’s COVID-19 website. This suspension, he said,  is “very distressing” for the medical fraternity, adding that according to the PMA’s records, 193 doctors and 30 paramedics have so far died while performing their duties during the pandemic.

“It is dropping down their moral(e). They are very much disturbed and feel discouraged,” Sajjad wrote.

“We (PMA) request you to immediately restore the priority registration of healthcare workers for vaccination to protect them from the deadly virus, so that they can serve the nation with courage and peace of mind,” Sajjad pleaded. 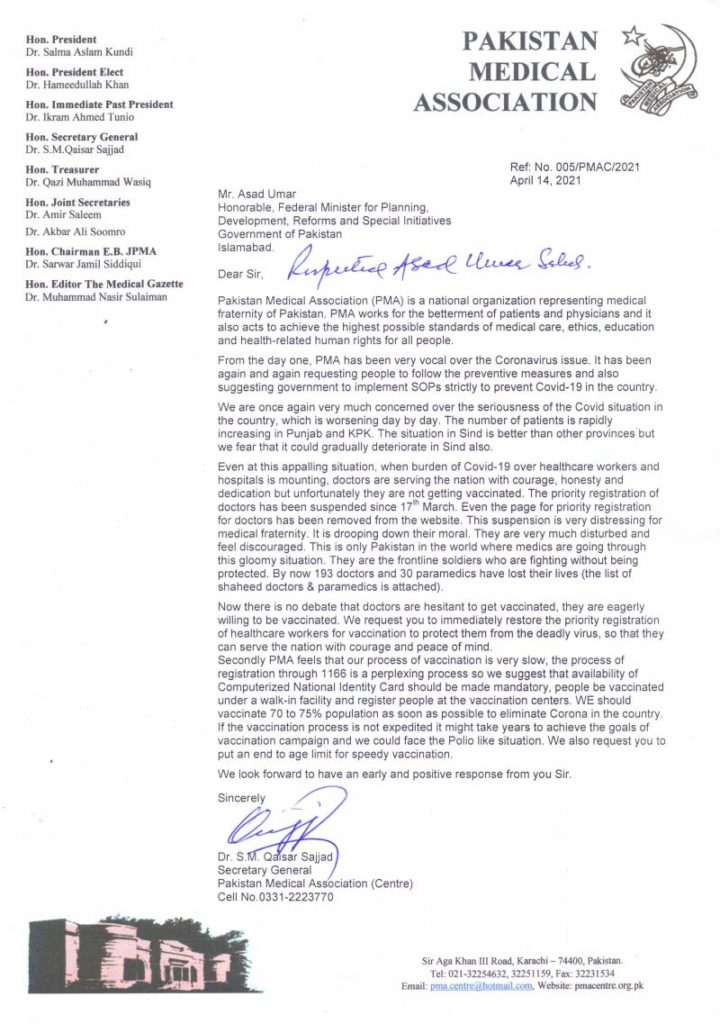 According to the official records of the NCOC, 151 COVID-related deaths have been reported amongst health workers, including doctors, nurses and paramedics, since the start of the pandemic.  That is among the estimated 15,611 health workers who have become ill with COVID-19, including 566 active cases.

In an interview with Health Policy Watch, Sajjad said that he  believes the Pakistani government’s pace of vaccination was “very slow” – partly because of uncertainty about supplies and also the efficacy of the Chinese-donated vaccine. Regardless, he said that health care workers should be prioritized.

“Maybe the government does not have sufficient quantities of the vaccine available, but stopping frontline HCWs registration is a crime,” he said, adding that health workers below the age of 50 and working in pandemic wards are not being registered.

Of the 367,322 health care workers vaccinated so far, 246, 495 have received both jabs but only 120,827 have received the first dose of the vaccine, according to the data obtained by Health Policy Watch.

Parliamentary Secretary for the Ministry of National Health Services Regulations & Coordination (NHSR&C) Nausheen Hamid said that the vaccination registration of the health workers slowed after the vaccination of the people over the age of 50 in the general public began.

She contended that health worker registration remained open, but turnout has been very low.

“Health workers were hesitant to get the vaccine,” said Hamid, adding that the government had invited them to get vaccinated, but many had adopted a ‘wait and see policy’.

However, others contested that. In an interview with Health Policy Watch, Dr. Murad Ali, of the Pakistan Institute of Medical Sciences (PIMS) said that he had tried to register himself for vaccination on the government website two weeks ago, but he was unable to do so.

“The virus is getting scary in hospitals,” he said, adding that those who wanted to get vaccinated should be facilitated.

The World Health Organization’s (WHO) Pakistan office was contacted for comments through its communication officer, Mariyam Yunus, however the country office didn’t respond despite repeated reminders.