ISLAMABAD – Faced with one of the sharpest increases in HIV/AIDS rates in Asia, Pakistan will ban the manufacture and import of conventional syringes from next month, government officials have told Health Policy Watch.

The move is in an effort to stem a three-year increase in HIV cases – 39% of which are estimated to be due to needle-sharing among injecting drug users.

Over the past year alone, there have been 25,000 new infections and 6,800 registered AIDS deaths – one of the fastest rates of rising infections in Asia.

As of 31 July, the country will shift over exclusively to the purchase and use of  auto-disabled syringes, said a senior government official, who asked not to be named.

“The import of conventional syringes is already stopped and now in this budget, auto disable syringes and raw materials are exempted from duties and taxes to incentivize importers and manufacturers,” the official said.

Auto disable syringes will be imported in the open market for both public and private sectors – a major decision to help prevent hepatitis and HIV/AIDS, according to the official.

In terms of the broader AIDS battle, health experts are  also closely watching how a recent decision by the Global Fund to Fight AIDS, Tuberculosis and Malaria giving the United Nations Development Program (UNDP) responsibility for managing millions of dollars in HIV/AIDS funding will impact the country’s fight against the spread of the epidemic.

In March,  the Global Fund suspended direct HIV/AIDS funding to all of Pakistan’s government and non-governmental stakeholders, appointing UNDP as the channel through which funding would be received and disbursed to government and NGOs.

Informed observers say that the decision was made to ensure more direct supervision of the funding, and in particular, to stimulate more collaboration between national and NGO entities in the battle against the disease.

The Global Fund has invested $697 million  in Pakistan since 2003 and is the country’s biggest donor for HIV/AIDS and TB.  A total of $72 million of the funding is allocated to fight HIV/AIDS. The Global Fund awarded $17,4 million  to the National AIDS Control Program (NACP) from January 2018 to June 2021. 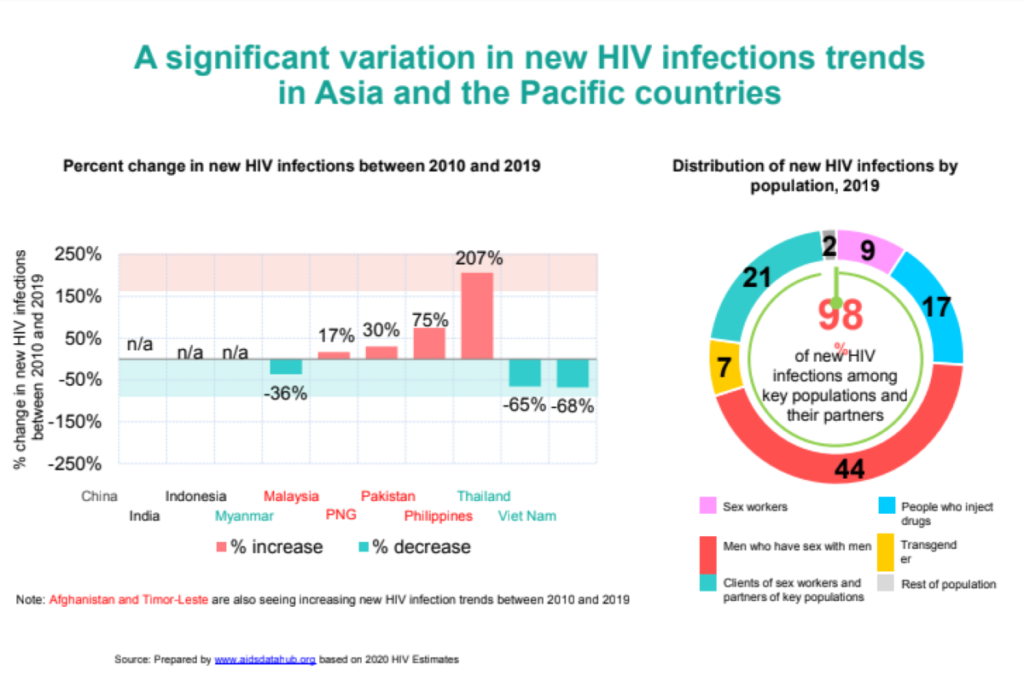 Recently released data from the  Pakistan Economic Survey (PES) show that there are 197,943 people living with HIV/AIDS in Pakistan, with 25,000 new infections and 6800 registered deaths, which experts fear is a rapid increase in the number of cases in the past few years.

“Cases are increasing and in Asia, Pakistan is the second country after the Philippines with a rapid increase in HIV/AIDS cases, which is alarming,” said Asghar Satti, national coordinator for the Association of People Living with HIV (APLHIV) – a nationwide network of people living with HIV.

Satti said above 90% of HIV/AIDS cases are from just two provinces: Punjab and Sindh.  While Satti says the data is collected by the government following validated methods, others say that the numbers could be even higher.

Among those are Nausheen Hamid,  Parliamentary Secretary for the Ministry of National Health Services Regulations & Coordination (NHSR&C).

Speaking on World Blood Donor Day on Monday, Hamid suggested that the numbers could be even higher, saying, “people are getting infected with HIV rapidly, while we do not have all data on the disease”.

Satti believes the lack of government resources for HIV testing is one of the main factors contributing towards the surge of new cases in the country.

HIV/AIDS prevention  programs are almost entirely  supported by the Global Fund, while the government’s own resources in providing services are limited.

In key populations,  People Who Inject Drugs (PWID) make up the largest share (39%) of HIV/AIDS population, while disease surveillance in Men Sex with Men (MSM), Female Sex Workers (FSW) and migrants is also increasing. HIV testing in other key at-risk populations is only estimated to be only about 5-6 %.

A senior official at the ministry of NHSR&C, speaking on condition of anonymity, told  Health Policy Watch that despite the huge financial injections made by the Global Fund to curb the spread in PWIDs, the disease surveillance rate in drug users is still high.

“In the last tranche of the $71 million grant for AIDS, 75% of the fund was given to a private NGO ‘Nai-Zindagi’ to control the infection rate in PWIDs,” said the official. “But still that NGO is looking for government’s aid and tax exemption to get auto-disable syringes.”

Currently, the government has no program on PWIDs.

The head of the NGO ‘Nai Zindagi,  Malaika Zafar, failed to respond to a list of questions sent to the NGO by Health Policy Watch. 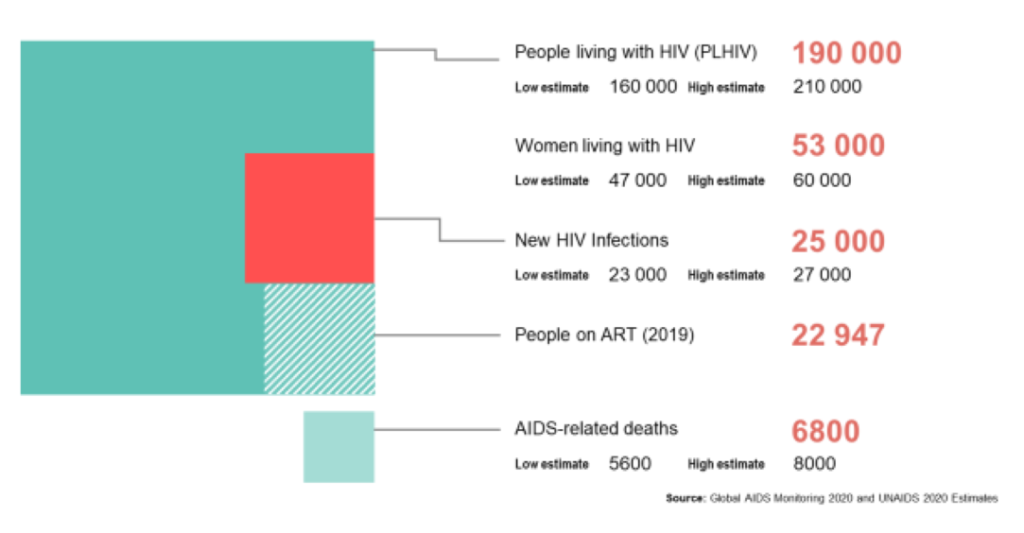 The Global Fund’s decision to appoint UNDP as the managing agent for Pakistan’s HIV/AIDS programs follows extensive consultations with key stakeholders in the country.

Communication seen by Health Policy Watch from the Global Fund to members of the organisations’ Country Coordinating Mechanism (CCM) detail how the Secretariat chose UNDP as the principal recipient of funding as a last resort, following the failure of other  potential organizations that were initially considered for this role to measure up in a capacity assessment.

The Global Fund found that “the lack of collaboration between different stakeholders could have  a negative impact on finalization of grants, mirroring the risk of a gap in service provision and ultimately affect people who need this support”.

The communication, however, stresses that the UNDP role is temporary until “national capacities are sufficiently enhanced”.

According to Satti there are only 49 HIV treatment centres around the country providing diagnostic tests and lifelong support of Antiretroviral Therapy (ART) medicines free of cost.

At the recent UN High Level Meeting on HIV/AIDS, the Prime Minister’s Special Assistant for the National Health Services Ministry, Dr Faisal Sultan contended that Pakistan had worked hard to overcome the setbacks of the COVID-19 pandemic, in its battle against HIV/AIDS over the past year:

“The government of Pakistan undertook rapid steps to modify our strategy, including staffing & smart outreach, provision of PPE for all field staff and multi month dispensing of ARV treatments.

“Resultantly, we were able to ensure uninterrupted supply of services during these unprecedented times, and we aim to continue to adhere to these revised protocols in close coordination with all partners, communities and relevant stakeholders”.

Sultan also said that Pakistan plans to integrate HIV/AIDS as part of the Community and Primary Health Care level interventions. Interventions to be covered eventually, he said, would include HIV/AIDS testing, counselling & referral for antiretroviral treatment, provision of prophylactics & syringes to high-risk groups as well as health education.

“We believe Universal Health Coverage is crucial for ensuring rights to health for everyone without any discrimination,” he said.

However, presently, the country’s UHC programmes remain weak, and the ambition for including HIV/AIDS interventions is far from the reality today.

For example, Pakistan has not yet even appointed a full-time national coordinator for the government’s HIV/AIDS control programme.  Rather, the activities are being managed by a deputy national coordinator, Ayesha Esani, in addition to her other duties.  Contacted by Health Policy Watch, Esani declined to comment.