EXCLUSIVE – IBADAN – The Nigerian government has quietly ditched the AstraZeneca COVID-19 vaccine meant to vaccinate tens of millions of citizens, and will gradually shift to the Johnson & Johnson’s one-shot vaccine, saying it is easier to administer.

Documents from the Nigerian Primary Healthcare Development Agency (NPHCDA) obtained by Health Policy Watch show that the agency intends to begin rolling out the J&J vaccine to almost 30 million people as soon as it can obtain the vaccine supplies.

While denying that safety concerns are an issue, the Nigerian government’s move also comes amidst growing global concerns about AstraZeneca’s efficacy against the SARS-CoV2 virus variant first identified in South Africa, as well as safety concerns that have led to the suspension of AstraZeneca vaccines for people under the age of 60 in Germany, and elsewhere (see related story).

Nigeria had already commenced the rollout of  the AstraZeneca vaccine, with vaccines supplied by the WHO co-sponsored COVAX initiative. The country was meant to get more AstraZeneca supplies though the African Medical Supplies Platform (AMSP) – having already placed the largest order on the continent through the AMSP, as previously confirmed by the Africa Centres for Disease Control (CDC).

However, according to the documents, the AstraZeneca vaccine doses reserved through the AMSP will be replaced with Johnson & Johnson vaccines. “Based on this, Nigeria’s total allocation is now 29,850,000 of Johnson & Johnson (Janssen) COVID-19 vaccine which is one dose shot to cover 29,850,000 eligible Nigerians as originally planned,” the agency stated. That would be enough to cover about 15% of Nigeria’s population of 200 million people. 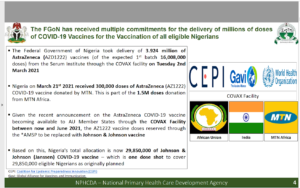 Government Says J&J ‘One Jab’ Vaccine, not Safety Worries, Are Behind Shift

Government officials in Nigeria attributed the shift to J&J’s to the vaccine’s single jab technology – which will make it much easier to administer as compared to AstraZeneca’s two-dose shot – as well as ensuring the vaccine coverage stretches even further. They denied that it was linked to issues of safety and efficacy.

However, behind the scenes, another factor is the J&J vaccine’s documented efficacy against the B.1351 virus variant identified in South Africa – and now spread to some 16 other countries on the continent, including nearby Ghana.

South Africa on Monday announced that it has secured 30 million J&J vaccines after a small  clinical trial and genomic surveillance showed the AstraZeneca vaccine was not strongly effective against that variant.

In an earlier advisory, the Africa CDC stated that African countries where the B.1351 variant is the predominant SARS-CoV-2 strain should consider swapping the AstraZeneca vaccine for others that have shown more efficacy.

Neither the AMSP or the Africa CDC could confirm when the J&J doses will become available.  A recently announced J&J commitment to supply some 400 million vaccines to Africa is only scheduled to get into motion in the third quarter of 2021. Meanwhile, the continent continues to call for vaccine equality, fair distribution and local vaccine production. 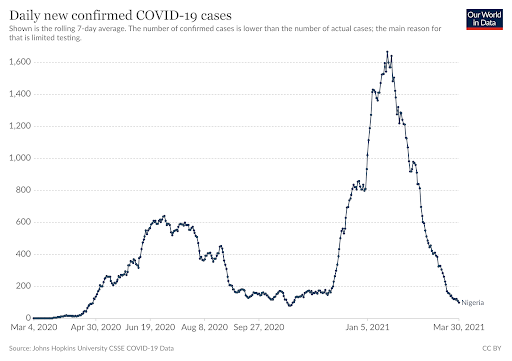 Government officials have continued to assure citizens of the safety of the vaccine despite global concerns – as  it continues to roll-out the available AstraZeneca doses while it awaits the J&J vaccines.

On Feb 18, just a few days after Nigeria received its first shipment of the AstraZeneca vaccine, the country’s drug regulator, the National Agency for Food and Drug Administration and Control (NAFDAC) approved the vaccine for emergency use.

“The recommendation for Emergency Use Authorization was based on rigorous scientific considerations,” NAFDAC stated.

Addressing a recent webinar on COVID-19 Vaccines, Dr. Faisal Shuaib, Executive Director/CEO of NPHCDA, acknowledged that the controversy around the vaccine’s safety, but urged countries in Europe and globally to continue vaccine administration as it is safe and effective.

Prof Mojisola Christianah Adeyeye, NAFDAC’s Director General added that safety of the vaccine is primary to the agency and that it would be using its Med Safety App for Active Pharmacovigilance of the vaccine. 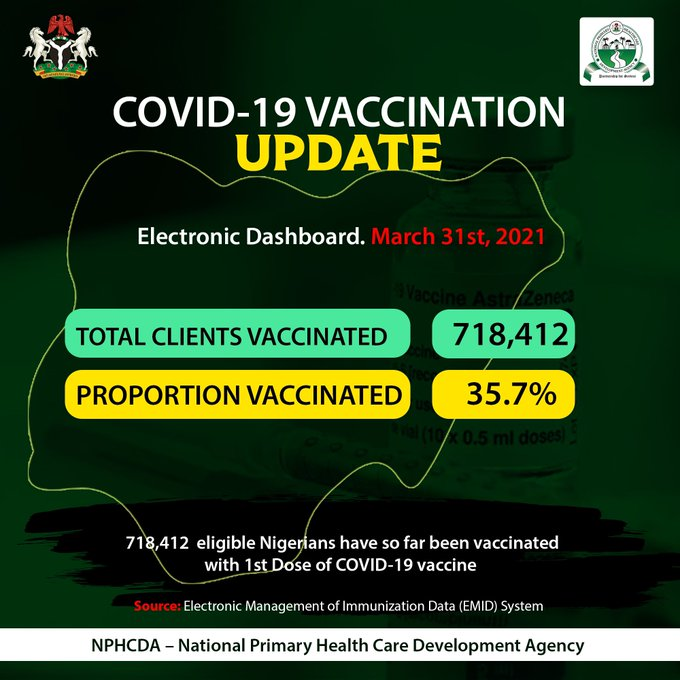 As at March 31, over 718,000 Nigerians had received the first doses of the available AstraZeneca vaccine supplies; coverage ranges from an over-the-top 104% target of priority patients reached in Kwara state to none at all in Kogi state – where a vaccine-hesitant  government is only just now succumbing to pressure to allow citizens to receive the vaccine.

But a cross section of health experts speaking at the recent Nigerian Academy of Science webinar said the bad publicity around the AstraZeneca vaccine might also have harmed vaccination in general. Recent news emanating from Europe has made the general public more suspicious of the potential lethal effects of the jabs – in addition to widespread misinformation circulating on social media.

Dr Yahya Disu, Head of Risk Communication at the Nigeria Center for Disease Control (NCDC), said recent surveys show broad acceptance of vaccines among Nigerians and this is expected to ensure the country quickly achieves herd immunity – provided sufficient vaccines are made available.  Disu said 86% of respondents of the surveys said they would still continue preventive measures such as wearing face masks, handwashing and social distancing even after receiving the vaccines.