The World Health Organization aims to expand mental health coverage to 100 million more people in 12 priority countries by 2023 as part of a new Special Initiative for Mental Health launched Monday at start of the 11th World Mental Health Forum.

Over 20 health ministers from around the world gathered in Geneva along with NGO representatives and WHO officials for the two-day forum, whose theme this year is “Enhancing Country Action on Mental Health.” The Special Initiative is just the latest global action WHO has taken to integrate mental health into its non-communicable disease platform. Just last year, the WHO Director-General called for the agency to accelerate implementation of mental health initiatives in its work.

“I strongly believe the World Health Organization’s Special Initiative on Mental Health will serve as a further catalyst to the development of this important era for public health,” said Ren.

The goal is to ensure “quality and affordable mental health care,” said Devora Kestel, director of the WHO Department of Mental Health and Substance Abuse. 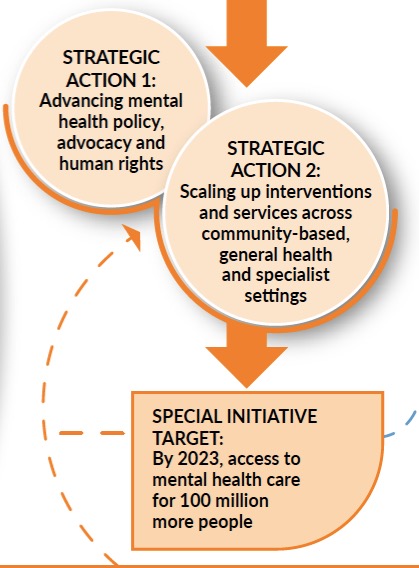 Two key strategic aims will guide the Special Initiative. They include:

The 12 countries chosen to pilot the initiative will be finalized during the forum, with preference to countries that have made mental health a priority in their national agendas, the WHO officials said.

US$ 60 million of “catalytic funding” will be needed in kick start the plan, but as the programmes would be embedded in existing health systems only US $1 million per country per year would then be needed to sustain programming in the 4 years afterwards. WHO is still fundraising for the plan.

The WHO is making sustainability of the initiative a priority, Kestel said. This is in contrast to implementing well-designed “single interventions” that are very successful in the short term, but then risk cancellation when special funding runs out because there is “no system designed around them.”

According to WHO, mental health disorders account for 1 out of every 5 years lived with disability globally and cause over US$ 1 trillion per year in economic losses. Someone dies by suicide every 40 seconds, and suicide mortality disproportionately affects young people and elderly women in low- and middle-income countries. People with mental health conditions are also more likely to face other physical health problems (e.g. HIV, TB, and noncommunicable diseases), reducing their life expectancy by as much as 10-20 years.

Taking a human rights perspective, Kestel pointed to the political declaration on Universal Health Coverage issued last month in New York City at a High Level Meeting of the United Nations General Assembly, and quoted the declaration’s reaffirmation of “the right for every human being, without distinction of any kind, to the enjoyment of the highest attainable standard of physical and mental health.”

“We intend to contribute [to realizing the right to health] through our Special Initiative,” said Kestel.