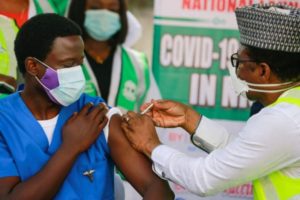 The United States under President Joe Biden is leading the pack with a total pledge of 260 million doses, followed by team Europe (France, Germany, Italy, Spain, Portugal, Norway, Belgium, Sweden, and Denmark)  which is donating more than 200 million vaccine doses over the next few months.

This and other COVID-related data is now readily available on a new interactive website which serves as a platform for COVID-19 vaccine information.

It provides information per country income classification and has eight categories including vaccine supply, and deliveries, dose donation to COVAX and financing gaps.

Launched on 30 July, the website is a collaboration between the International Monetary Fund (IMF), World Bank Group, World Health Organization (WHO), and World Trade Organization (WTO).

Announcing the launch of the website, the agencies called on countries with advanced COVID-19 vaccination programs “to release as soon as possible as much of their contracted vaccine doses and options as possible to COVAX, AVAT, and low and low-middle income countries.”

Citing “acute and alarming shortage”, the four agencies said less than 20% of the necessary vaccines are scheduled for delivery to low- and middle-income countries through COVAX, AVAT, or bilateral deals, with fewer than 5% of pre-purchased vaccine doses having been delivered.

The agencies urged COVID-19 vaccine manufacturers to  “redouble their efforts to scale up production of vaccines” and called on richer countries to eliminate barriers to the export of vaccines.

On Tuesday, just days after the launch of the website, President Biden announced  his latest donation and shipment of more than 110 million doses of vaccines to more than 60 countries, which according to a statement by the White House is: “A major milestone that cements the United States as the global leader in COVID-19 vaccine donations.”

“These more than 110 million doses – that are already saving lives around the world – are just the beginning of the Administration’s efforts to provide vaccines to the world. Starting at the end of this month, the Administration will begin shipping half a billion Pfizer doses that the United States has pledged to purchase and donate to 100 low-income countries in need,” the statement reads.

Biden’s announcement comes as a new wave of COVID-19 infections fuelled by the deadly Delta variant is currently striking countries worldwide. Just last week the WHO announced a special global initiative to respond to the Delta variant, as COVID-19 cases are expected to reach 200 million within the next week, calling for countries to intensify their vaccine roll-out programs.

The data on the new website gives a detailed breakdown of, among other, vaccine administration and vaccine shortages per country.

Rich countries including the US and the UK are streaks ahead of low-and middle-income countries in their vaccination programs.

Biden’s donation announcement comes as the Centers for Disease Control and Prevention announced that 70% of US adults have had at least one shot of a COVID vaccine.

Almost 56% of the UK’s population have been fully vaccinated, with 68.4% having received at least one jab.

African countries, including South Africa, Kenya, Uganda, and Nigeria are lagging with the vaccination programs largely due to access to vaccine doses.

To date, South Africa has only vaccinated 5.4% of its more than 59 million population with the 8,243,908 vaccine doses delivered to the country. Only 4.78% of SA’s population is fully vaccinated, while 9.98% have received at least one dose.

Less than 1% (0.68%) of Nigerians have been fully vaccinated, while 1.23% have at least received one dose. Uganda and Kenya have vaccinated 0.01% and 1.59% of their populations respectively.