As new malaria cases have increased as a result of COVID-19 and key global targets have been missed by miles, the World Health Organization (WHO) is calling for new approaches and tools to better implement the current ones in place in the 2021 WHO Malaria Report released on Monday. 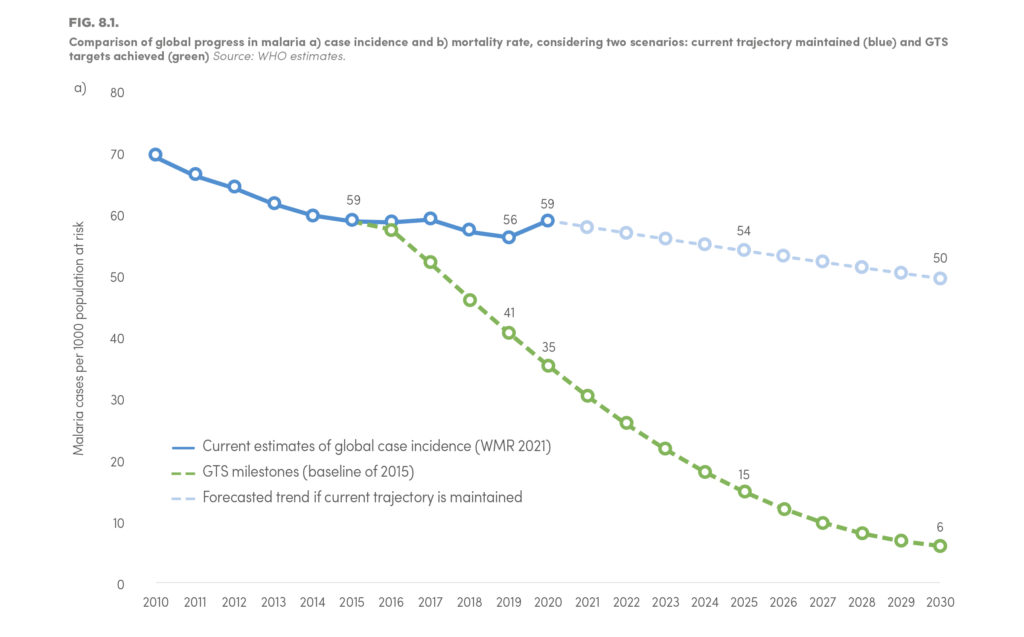 The report showed an increase of nearly 14 million cases last year in comparison to 2019, while there were 69,000 more deaths in the same period. Nearly two-thirds of these additional deaths were attributed to disruption caused during the COVID-19 pandemic.

While the 2020 target for malaria has been missed, the long-term goal of the World Health Organisation’s Global Malaria Strategy is a 90% reduction in global malaria incidence rates by 2030. Achieving this would need more global efforts, especially financial aid.

Less than half of the target US$ 6.8 billion was invested in 2020 for the control and elimination of malaria. To reach global malaria targets, annual investments will need to more than triple by 2030 to $10.3 billion per year. Currently, the biggest funders are the US, and national malaria programmes which together account for 70% of the total funding in the world towards malaria eradication.

The report also pointed towards accelerated need of financial and technological aid to roll out Malaria vaccines across high-burden regions, and the further use of diagnostics and treatments in these regions.

The report deployed a new statistical methodology to gauge malaria deaths among children under the age of five. This method, which shows more precise cause-of-death estimates among young children for all diseases including malaria between 2000 and 2020, showed that there were more deaths than estimated earlier.

“By recalibrating, we are acknowledging that we probably have a bigger burden of malaria than what we had been estimating previously,” the Director of the WHO’s Global Malaria Programme, Dr Pedro Alonso ,said in the press conference. He said that the report was not just about tracking the progress we are making towards malaria, but also about taking further action. This includes scaling financial commitments and vaccine rollout.

On 6 October 2021, the WHO recommended the widespread use of the RTS,S/AS01 malaria vaccine among children in sub-Saharan Africa and in other regions with moderate to high P. falciparum malaria transmission. This was a historical move that was thirty years in the making. But without scaling financial commitments, there is no timeline for the rollouts of the vaccine that is seen as crucial in reducing deaths of children suffering from malaria.

“This is a prime example of where international mechanisms will need to come into play to ensure adequate financing that allows a rapid expansion of production capacity, and the urgent deployment of the vaccine,” he said but was unable to give an estimated outline or timeline for the rollout of the vaccine.

The vaccine could save somewhere between 40,000-80,000 lives of African children each year and that is something that needs to be treated with the “utmost ambition and a sense of urgency”, he added.

“Therefore, a slow gradual scale-up would not be acceptable. This needs to be a massive urgent operation to ensure that we can reach as many children as possible and as soon as possible.“

“We call on Gavi to make sure that high-burden malaria countries with the weakest health systems are provided extra support for a timely and effective implementation of this vaccine,” said Dr Saschveen Singh, Tropical Infectious Diseases Advisor for Medecins Sans Frontieres on the news of Gavi’s financial commitment to vaccine implementation.

While part of the rise in malaria cases and deaths can be attributed to the disruption during the Covid-19 pandemic, the global progress against malaria had already plateaued much earlier. The WHO’s 2017 World malaria report had forewarned that the global response had reached a “crossroads,” and that strides toward the WHO’s global strategy for reductions in disease and death were off track. Gains made until 2017 were slowly being erased but despite that and the pandemic, the worst projections of Covid-19’s impact in 2020 were avoided.

“Thanks to the hard work of public health agencies in malaria-affected countries, the worst projections of COVID’s impact have not come to pass. Now, we need to harness that same energy and commitment to reverse the setbacks caused by the pandemic and step up the pace of progress against this disease.” said Dr Tedros Adhanom Ghebreyesus, WHO Director-General in a press release.

Alonso added that the pandemic was not over and the pace of economic recovery is uncertain. “Without immediate and accelerated action, key 2030 targets if the WHO GTS strategy will be missed and additional ground may be lost.”

“We say ‘disruptions during’ the COVID-19 pandemic just because not everything is because of the pandemic.,” said Dr Abdisalan Noor, Head of Unit, Strategic Information for Response at Global Malaria Programme, WHO. He pointed out that some regions also face health and humanitarian crises like Ebola outbreaks, armed conflicts, and flooding.

Of the world’s 11 highest-burden countries, India was the only one that made progress in its fight against malaria. The rest of the countries are all in Africa and have reported an increase in cases and deaths in 2020.

The WHO Africa region is single-handedly responsible for 95% of the malaria cases in the world in 2020, with Sub-Saharan Africa responsible for 96 percent of all deaths in 2020, the report showed. About 80% of deaths in the region were reported among children under the age of five.

“Without accelerated action, we are in danger of seeing an immediate resurgence of the disease, particularly in Africa,” Tedros said in the report. “The  emergence  of  antimalarial drug  resistance in East Africa is also a considerable concern,” he said.

Nigeria, Democratic Republic of Congo, Tanzania, and Mozambique accounted for just over half of all malaria deaths globally. The same countries, along with Angola and Burkina Faso, were also responsible for 55% of all malaria cases recorded globally in 2020.

Some progress was  made

Despite the missed targets and disruption in the fight against malaria, there was a downward trend witnessed since 2000 in the global mortality rate from malaria. Additionally, 1.7 billion cases and 10.6 million deaths were avoided from 2000-2020, of which 95% of deaths averted were in the WHO Africa Region.

Between 2019 and 2020, India reported a reduction in malaria cases and deaths. This is significant considering India carries the highest burden of malaria in the WHO South-East Asia Region. However, the rate of reduction decreased compared with pre-pandemic years and that raises concerns about testing and diagnosis. It is also interesting to note that the South-East Asia region is the only WHO region that met the mortality and morbidity GTS milestone for 2020.