NAIROBI – Kenya has suspended parliament and banned church gatherings in its capital, Nairobi, and four other counties as the country records its highest number of COVID-19 deaths since the pandemic started last year and amid a surge of positive cases.

President Uhuru Kenyatta on Friday announced partial lockdown and instituted new curfew measures to start from 8pm to 4.00am, the suspension of county assemblies and the closure of bars in Nairobi as the country experiences a third wave of the deadly virus.

The four counties affected by the lockdown are Kiambu, Nakuru, Machakos and Kajiado.

He said the number of confirmed COVID-19 cases had increased to 15,916 on 21 March, up from 4,380 in January. The  positivity rate has jumped from 2.6% to 22% in the same period. The lockdown was necessary to avert a health crisis.

“This tells us that our rate of infection has gone up 10 times between January and March 2021. Indeed, it is a clear indication of a new trend, that now Kenya is squarely in the grip of a third wave of the Pandemic,” said Kenyatta, adding that the peak is likely to flatten by mid-May. 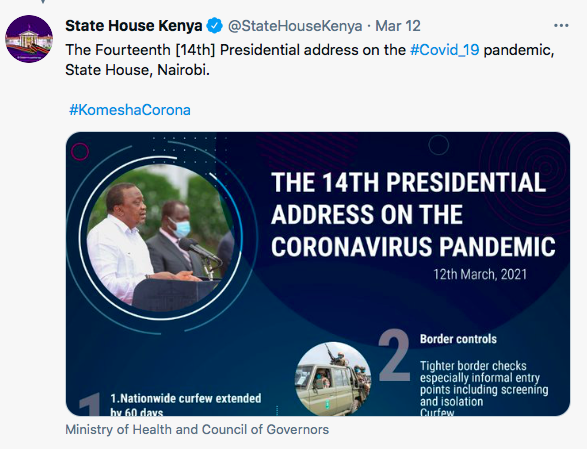 A total of 1,080 patients are currently admitted in various health facilities countrywide, while 3,825 patients are on Home Based Isolation and Care.

Some 121 patients are in intensive care units, 35 of whom are on ventilatory support and 77 on supplemental oxygen, nine patients are on observation, 81 patients are on supplementary oxygen with 68 of them in the general wards and 13 in the High Dependency. Kenya has one of the highest cumulative incidence rates among the African Union member states in the Eastern region.

Kenyatta said the spike in new cases called for urgent and drastic measures and that lockdown was crucial to avert a national health crisis. Some of the lockdown rules include:

Kenya’s increasing COVID-19 cases are likely driven by the highly transmissible variants of concern B.1.1.7 and B.1.351 detected in January, according to a report released by the Africa Centres for Disease Control on 23 March.Scientists say although there are increased cases of variants the lack of adherence to COVID-19 protocols is also leading to increased infections.

Professor Joachim Osur, technical advisor for programmes at AMREF Africa, says Kenya was experiencing high infection rates among communities. He said hospitals are getting overwhelmed, Intensive Care Units (ICU) in hospitals are full, not everyone needing ICU care is getting it and the number of deaths is steadily increasing.
“I think the reason is that we stopped taking precautions,” said Osur, adding that people started behaving irresponsibly when schools, churches and markets re-opened.

“I am worried that schools are running and children who are super spreaders are infecting the older populations,” said Osur.

“It has to be a systematic analysis to see that the variant has evolved over time,” says  John Nkenkasong, head of Africa CDC.

“Unfortunately Kenya is not technologically competent enough to be monitoring the strains of the virus we have and the mutations that are happening. So, we are unable to know at this point if it is the variants but it could be a reason,” said Osur. “Mutations happen everyday but it is possible that we have more than one variant and it is possible that they are more aggressive.”

Earlier this week Nkenkasong said additional resources and efforts are required to track the virus through surveillance. He said vaccinations should continue. “We do not think the situation in Kenya has evolved to a threshold past where the vaccine should not be used,” he said.

The vaccine uptake in Kenya has been slow with only 640, 000 people vaccinated so far. On 3 March Kenya received 1 million Oxford/AstraZeneca vaccines from the COVAX facility.

“These simple public health measures are what will save us but people are not taking them seriously. The responsibility relies on individuals- more community education is needed on what this virus is and what it should be done to the community,” said Osur.