Pune – Despite ramping up its coronavirus vaccination drive and amidst a deadly second wave of infections, India is wasting 6.5% of its vaccines, data released by the country’s government shows.

Experts this week told Health Policy Watch that while the high vaccine wastage is also a sign of vaccine hesitancy – particularly among poor groups traditionally suspicious of government – there are other factors contributing to inefficiencies in the vaccine delivery.

“Wastage is caused due to inadequate numbers”, said Rajeev Sadanandan, chief executive officer of the New Delhi-based Health Systems Transformation Platform (HSTP) – referring to the lackluster response and no-shows that have characterized the vaccination campaign in some regions, and among some populations.

“A vial once opened cannot be recapped. Each vial is meant for 10 persons. If they do not get 10 persons per vial they have to throw away the vial. The solution is to plan the vaccination coupled with mobilisation of eligible persons.”

The data on vaccine waste, released on March 17, shows that vaccine wastage is highest in big southern states; 17.6% in Telangana and 11.6% in Andhra Pradesh. Union health secretary Rajesh Bhushan has emphasised that vaccines are invaluable commodities and public health goods and that they must be optimally utilised.

Some states have also raised concerns over supply shortage. On Wednesday, the Central Government released a scathing response, accusing the state governments of spreading “panic” among people.

On April 5 India reported over 100,000 new COVID cases – its highest ever tally since the pandemic began. Even at the peak of its first wave last year the country’s highest single day tally was at 97,000 cases.

Daily new Covid-19 cases have surged to an all-time high in India.So far India has delivered nearly 80 million doses of vaccines, according to government figures. Most of the earlier doses were given to healthcare workers and high-risk groups like the elderly and those above the age of 60. On April 1 the government lowered the age of those eligible for vaccines to everyone over 45 and the authorities said the aim to keep the vaccine wastage down to less than 1%.

The state of Maharashtra has requested that the age of those eligible for the vaccines be lowered further to 25. Highly urbanized, Maharashtra has densely populated cities like Mumbai, and is responsible for 58.19% of all new Covid-19 cases in India. The state that was functioning near normal at the start of the year is back to resorting to night and weekend lockdowns to slow down the spread of the virus.

India offers its residents two vaccines – the homegrown Covaxin vaccine, developed by Bharat Biotech and the Oxford/AstraZeneca vaccine, Covishield, which is being manufactured under a license by the Serum Institute of India. Those receiving the vaccine do not get to choose between the two.

There are multiple social, logistical and economic reasons why wastage is occurring. However, Gagandeep Kang, vaccine expert and professor at the Christian Medical College (CMC), Vellore explained that it is also rooted in conventional health service protocols: to improve India’s low immunization coverage for childhood vaccination, instructions were given to the staff to not worry about keeping wastage low and to focus on ensuring that every child is vaccinated.

“When the same people are now told to not waste a single dose of vaccine then it becomes challenging for them as it is different from the protocol that they are used to,” Kang said. She added that by not allowing healthcare workers to give vaccines that are about to go waste to non-priority groups, the government is trying to ensure that the vaccines were not misused in the name of wastage.

Take Vaccines to the People 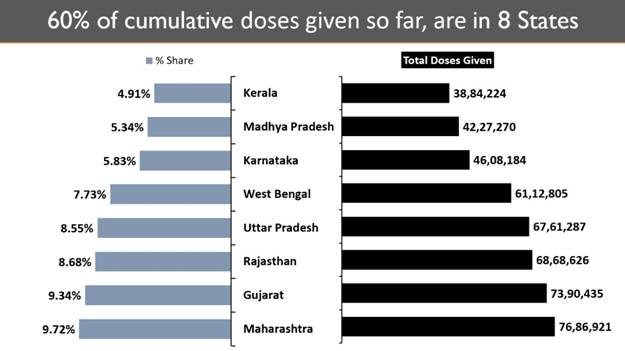 Another reason why wastage is occurring is because the vaccination drives are being conducted in a few centralized locations. Travelling to a vaccine centre that is far away costs money; for some it might mean a day’s lost wages.

This issue, however, must not be confused with hesitancy, experts caution: “Unless we address that economic and social difficulty of the vulnerable population, we cannot expect the numbers to go up,” said Sadanandan, saying that vaccine sites must be made more accessible to people.

However, the poorest groups in India also do harbor significant distrust of the government generally. As a result, vaccine drives in some poor communities may yield lower than hoped for turnout – leading to wastage of the temperature sensitive doses.

Another issue, linked to vaccine hesitancy, relates to safety concerns – particularly as the Indian government was not transparent about the data about the Bharat Biotech vaccine in the early months. The AstraZeneca vaccine also has seen major concerns emerge in Europe over rare blood clots among younger groups.

Kang said that the data for vaccines is always evolving and while there can be rare safety concerns with one in every 50,000 or 100,000 people, it would only be known after millions of people are vaccinated. “If you look at the benefit and risk, the benefit of the vaccine even in the one in a million clotting event (as is being reported about the AstraZeneca vaccine) is very firmly in favour of the vaccine.”

Early on in the pandemic the World Health Organization (WHO) pushed countries to ramp up their COVID testing, using communications and advocacy strategies to convince people to get tested as well. Experts now point to the need for countries like India, that are in the process of expanding its vaccination programme, to shift to effectively communicating the benefits of getting a jab.

As the government expands coverage to a larger pool of people the wastage also could come down, experts also believe – because more people will be eligible to claim unused doses at the end of the day, avoiding wastage.

At the same time, it’s important to expand eligibility for the jabs only after sufficient supplies are assured.

“If we aggressively push (for people to take vaccines) and the vaccine is not available that will also be a problem,” said Kolandaswsmy K, former director of Public Health Preventive Medicine for the government of Tamil Nadu in southern India.

Disha Shetty is an independent science journalist based in Pune, India