The WHO co-sponsored Act Accelerator Initiative, which aims to get 70% vaccine coverage to all countries by mid-2022, as well as more equal distribution of tests and treatments, tabled its latest  ask to donors – for some $16.8 billion in new funds – out of what it says would be a total cost of $48 billion to meet global equity targets.

Speaking to journalists ahead of Wednesday’s launch of a new fundraising campaign, former UK Prime Minister Gordon Brown said that the funds would be crucial  to ending the pandemic in 2022.

However a report by the forecasting firm Airfinity, also issued on Wednesday, noted that some 35% of donated vaccine doses that have already been delivered to lower-income countries have not yet been administered. The assesment underlines the complexities faced on the ground in actually ensuring the uptake of COVID tools in countries and regions beset with multiple simultaneous health threats – and health services that are still facing considerable disruptions after two years of pandemic stress. 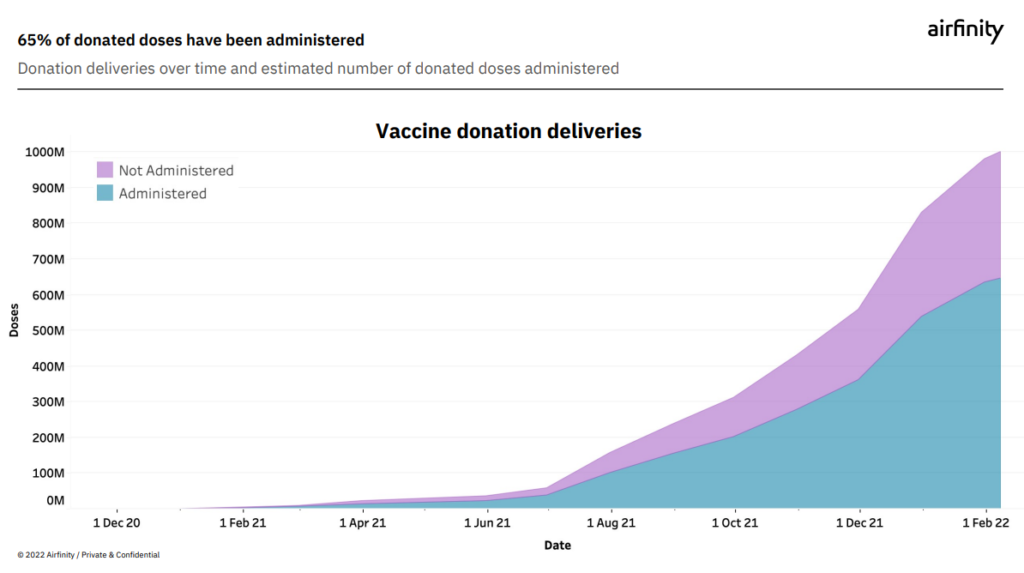 According to the ACT Accelerator which is a partnership of leading agencies that is providing the COVID tools to more than 90 low and lower middle-income countries, there is a US$ 16 billion ACT-Accelerator funding gap that needs to be filled by donors  That is not including $6.8 billion more needed for in-country delivery costs, which co sponsors of the initiative hope to meet from other sources, such as multilateral development bank loans.

Closing that funding gap, ACT-Accelerator proponents say, will be important to ending the pandemic as a global emergency in 2022.  And those needs, totally some $23 billion, do not even include related costs for national procurement and hoped-for manufacturing scale up, which add up to another $25 billion – leaving a total investment cost of some $48 billion, according to the newly published ACT-A Investment case.

If the needed funding is not released, Brown added that the needed preventive actions may not be taken and this could put the entire world, including the rich countries, at a high risk.

With a mandate to overcome vast global inequities by providing low- and middle-income countries with access to COVID-19 tests, treatments, vaccines and personal protective equipment, ACT-Accelerator said it urgently needs new funding to scale up its work to develop and deliver the COVID-19 countermeasures essential to address the threat of Omicron and prevent even more dangerous variants from emerging.

“The overall ask is $16.8 billion of the $23.4 billion budget. The remaining $6.5 billion we hope can be supported by MDBs as well as through domestic financing in middle-income countries. But in addition, I want to also highlight that this is not the total of the international COVID-19 response, there is an additional need for $24.6 billion. So in total, the COVID-19 response in 2022 is at $48 billion,” Rottingen said.

Among the additional $24.6 billion is in-country support which will support countries in delivering vaccines, tests and treatments. Rottingen said this will cost $6.8 billion and can be provided by international bilateral support in addition to the support for the ACT agencies, as well as support from the MDBs.

The ‘Fair share’ contributions were calculated for each of the countries and collectively cover the total immediate grant funding need of US$ 16.8 billion, assuming that the private sector and philanthropic institutions can cover US$ 0.5 billion. For the 2020-21 ACT-Accelerator budget, six countries (Canada, Germany, Kuwait, Norway, Saudi Arabia and Sweden) met or exceeded their fair share commitments.

Rottingen noted that they are using a model that was developed in the first budget cycle of the accelerator, and is based on a simplification of the International Monetary Fund quota formula with the main indicators being GDP as well as the openness of the economy.

“And then adjusting that by GDP per capita to introduce a progressive element in the fair share model, and then finally adding a 20% risk buffer to ensure that we can meet the funding target of $16.8 billion,” he added.

The European Union is expected to contribute around a quarter of the needs, the rest of G7 will contribute 46%, the remaining members of the G20 will contribute 22% while 8% will be provided by other countries based on the fair share model.

Triumph of science, failure of politics

Carl Bildt, WHO Special Envoy for the ACT-Accelerator described the COVID-19 pandemic as a triumph of science but possible failure of politics considering the gross inequity in the availability of the means to fight COVID — vaccines, treatments and testing.

“It is not only morally appalling, it is also profoundly dangerous. If we don’t stop the pandemic, we might soon run out of Greek alphabets. We know that some variants might be more benign, but others might not be. And we all know that there’s absolutely no way of knowing which of the variants is coming next,” he said.