As global stocks of remdesivir, one of the few promising therapeutics for COVID-19, run low, the drug’s maker Gilead Sciences says that voluntary licensing to enable more manufacturers to produce the drug will not help expand access, countering advocates’ calls.

Rather, the lack of a “coordinated global supply chain” is to blame for worldwide shortages of remdesivir, says the pharmaceutical giant. 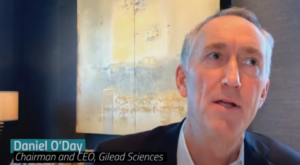 “We understand we are not yet in a position to meet real-time demand of [remdesivir] in every corner of the world,” said Gilead’s CEO Daniel O’Day, at a virtual press conference hosted by the International Federation of Pharmaceutical Manufacturers and Associations (IFPMA) on Thursday. “We will do everything we can to make sure that we can produce as much remdesivir as possible.”

“What we need in order for that to happen is a coordinated global supply chain…starting material [for remdesivir] must be appropriately managed…in a way that meets the standards of patients regardless of where they are in the world,” he added, although he did not specify the exact bottlenecks the supply chain was experiencing.

However, “the concept of just licensing [remdesivir] to everybody is not going to get more at the end of the day,” said O’Day.

Currently, Gilead has licensed remdesivir to nine generic manufacturers at a ‘no-cost basis’, and supported technology transfer for those select producers.

But some critics have said that more voluntary licenses are needed, arguing that increasing the number of manufacturers will further expand access. Gilead has not made the voluntary license agreements for remdesivir publicly available, despite its willingness to do so in the past. When asked about this on Thursday, Gilead did not respond.

Some of the countries with the largest coronavirus caseloads in the world, such as Brazil and Mexico, are not covered under Gilead’s generics licenses.

“The countries that are not covered by Gilead’s license would have to buy from Gilead, but they can’t buy from Gilead because the United States and Europe have bought up the entirety of Gilead’s supply,” said Maybarduk. Gilead will have only 15,300 treatment courses available for countries outside the EU and United States to access from August to September, according to a new report from Public Citizen.

And the supply of one of the only drugs approved for emergency use to treat COVID-19 has even been running low in high-income countries like Spain. Demand for the treatment shot up after remdesivir was shown to significantly reduce the length of a hospital stay from an average of 15 days to 11 days for COVID-19 patients, according to a trial funded by the US National Institute of Allergies and Infectious Diseases (NIAID) in May.

With the recent expansion of the emergency use authorization for remdesivir in the United States, the country with the highest number of active coronavirus cases in the world, demand could again shoot up. The drug can now be used to treat all hospitalized COVID-19 patients in the US, rather than just severe cases.

And despite Gilead’s view that remdesivir’s existing price is ‘well below ” its market value, civil society advocates, as well as health ministers, note that it’s priced out of reach for many people. Advocates have claimed that remdesivir could be priced even lower, given that the current market price is five times that of production, according to The Journal of Virus Eradication’s estimates.

“Some critical drugs like remdesivir…can be significantly expensive for some in our countries,” said Honorable Mitoha Ondo’O Ayekaba, Vice Minister for Health and Social Welfare, Equatorial Guinea, at a virtual press conference on Thursday.

-Grace Ren contributed to this story.